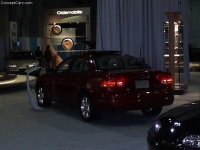 1997 Oldsmobile Alero
A little piece of American history, the Oldsmobile Alero was the final Oldsmobile ever constructed. The Alero featured a very uncluttered yet distinct design that was set apart from all of GM's previous models. Originally the Alero's structure was meant to be modeled after Chevy's Malibu sedan, but Wasenko instead realized that the family vehicle couldn't be constructed with the type of sporty lines and dynamic that the vehicle needed. Because of this, Wasenko chose to switch to a lower platform, to the same one that Oldsmobile's Cutlass sedan used.

Originally debuting in 1997 the design of the Alero was showcased alongside the Alero Alpha concept vehicle, which was a futuristic V6-powered sport coupe that came with many design elements that were seen in the production Alero, along with some features that were never meant for production. The styling of the Alero is shared with Oldsmobile's mid-size Intrigue and well-appointed Aurora models. The addition of the Alero to the lineup successfully created a very unified Oldsmobile ‘family' look in the showrooms as the Aurora was quite firmly comfortable in the flagship position and the well styled Intrigue was also doing exceptionally well. The Alero was to replace the slow-selling Achieva and all Alero's were constructed in Lansing, Michigan.

The Alero shared its GM 'N-body' platform along with much of its running gear with the updated Pontiac Grand Am and the Chevrolet Malibu. The Alero ended up being the sportier model out of these three and it featured a tighter suspension and eye-appealing looks. The Alero's M.S.R.P. was also much more reasonably priced at the low end of the range, while topping out higher for fully loaded models.

Marketed as the Chevy Alero in select European countries, it was only available then as a sedan. Though the Alero was sold under the Chevrolet brand, it still came with Oldsmobile badges, and most European customers wouldn't even recognize what the badge stood for. During the 2000 model year, Chevrolet badges were added to the grille and rear fascia. Also available this year was a 5-speed manual transmission that was supplied by Getrag.

'GL' models came in three levels; 1, 2, and 3. The 3 level was equipped with the V6 engine. Automatic was an option, and manual shift was standard on GX and GL1 versions. Brand new for 2000 were three child-seat anchors placed on the rear parcel shelf. The GLs offered a new Sport package that included the firmer performance suspension, which had previously been reserved only for the GLS and included wider tires and 16-inch alloy wheels.

The following year, the Oldsmobile Alero's V6 engine was much more widely available and now newly optional for the GL and GL2. Additional standard equipment was also installed. For this year the GL3 model was dropped, meanwhile the GX models gained power windows, a standard CD player and cruise control. Keyless remote entry was added to the GL1 and the GL2 received a sport suspension and rear spoiler. Alero's continued into the 2002 model year, the GM announced in 2001 that the Oldsmobile brand would begin a phase-out.

For 2002 the GX and GL1 Alero models received a 140-hp 2.2-liter 4-cyl engine, which replaced the 150-h 2.4 engine which had had lower EPA fuel-economy ratings. The following year the Alero featured an available XM satellite radio. For 2003 the standard antilock brakes on lower-line models were no longer available. No changes were made to the Oldsmobile Alero for 2004.

The Alero was eventually replaced in Europe and Canada by the GM Daewoo-sourced Chevrolet Evanda/Epica. The final vehicle sold under the Oldmobile brand, Alero was also Oldsmobile's final compact vehicle.

A ‘final run' of Collector Editions rounded off the Alero and Oldsmobile brand for 2004. Available as a 2-door coupe or 4-door sedan, these models came with a choice of a 4-cyliner or V6 engine. Standard was automatic transmission, though manual was available with the 4 cylinder engine. GX and GL1 models included ABS as optional equipment while it was standard on the uplevel GLS and GL2 models and also included 4-wheel disc brakes.