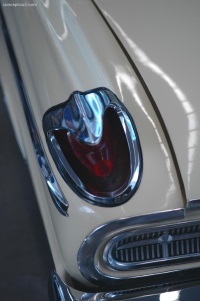 1963 Mercury Meteor
Produced: 50,230
Original Price: $2,335 - $2,885
Average Auction Sale: $7,817
Median Auction Sale: $9,250
Chassis Profiles
Introduced by the Lincoln Mercury division of the Ford Motor Company, the Mercury Meteor was featured from 1961 through 1963. The name was applied to low end full-sized vehicles for 1961 and for '62 and '63 the name was used to denote Mercury's mid-sized sedans before being discontinued. The Meteor remains more an ‘asterisk' rather than as a well known Mercury product since the vehicle was introduced while Mercury as a marque was in flux and never a solid marketplace performer in consumer sales.

In 1949 the Meteor nameplate was used by Ford for its stand alone brand of vehicles that used Ford bodies trimmed using Mercury parts for sale. This was specifically in the Canadian marketplace. Until 1961 Meteors continued to be produced and sold in Canada before being reintroduced into the market again from 1964 through 1976.

During the 1940's, 1950's and 1960's in Canada, Ford trucks were badge-engineered and sold as Mercury trucks, along with Ford and Mercury sheet metal that wore both Meteor or Monarch nameplates. First appearing in April of 1946, the Meteor, Monarch cars and Mercury trucks were part of Ford of Canada's postwar marketing strategy. Due to the slightly lower standard of living, more lower-priced vehicles were sold in Canada than in the U.S. This was also due to the whopping sales and excise taxes that amounted to almost 20% to the sticker prices across the border in the U.S.

Mercury and Canadian-made Ford trucks were basically only different in cosmetic enhancements. For the first few years it was just ‘Mercury' versus ‘Ford' letters on the hoods and pickup tailgates, as well as distinctive medallions that set them apart. Usually the Mercury trucks featured a bit more uniqueness in its styling to keep it line with its slightly-more-upscale image. The Mercury featured a gray marble look with its dash plastic molding in 1948 through 1950, while the Ford was tan in color. Occasionally distinctively-different grille layouts were featured. In comparison to American Ford's plain looks, Mercury trucks featured heavily-chromed grille and bumper treatments.

For 1949, the Canadian Meteor and Monarch were all–new models. When the new Monarch nameplate was unveiled for 1946, the new Meteor debuted in 1949. Prior to this, Canadian Lincoln Mercury dealers sold a Mercury-based Mercury 118 and a Ford-based Mercury 115.

U.S. Ford introduced the F-1, F-2, F-3, etc. truck nomenclature in 1948, and Ford of Canada came up with their own modified version. They used an 'M' for the Mercury, but the numeral stood for the truck's Gross Vehicle Weight rating, less the zeros.

Virtually identical were the mechanicals of both Canadian built truck brands. Due to a smaller Canadian market, buyers had a much smaller variation to choose from in terms of models, rating and power-plants. American Ford featured all-new overhead valve V8 in 1954, the flathead V8 continued on for yet another year in Canadian Fords, Meteors and Mercury trucks. Only V8 engines were installed in all Canadian Ford cars and trucks until 1956, since no six-cylinder Ford engines were produced in Canada until the 223- cid six appeared in 1956.

Ford offered car-based sedan deliveries, called the Courier, for years, and featured Meteor versions as well. In 1957 the Ranchero pickup was unveiled, and a Meteor Ranchero was featured in Canada and would continue for several years.

The Automotive Trade Agreement was signed by the U.S. and Canada in 195 and eliminated the need or a dual marketing network. On March 23, 1968, the free-flow across the border brought the phase-out of the Mercury trucks.

Ernest Breech convinced Ford Execs during the mid 1950's that the automaker had to meet each sales segment with unique products to compete with the likes of General Motors. To set it apart from the previous Ford models from before the War, the plan implemented by Breech called for the marques to be designed on a completely new platform and body design. A design than began with the 1957 model year models.

In comparison to Pontiac and Dodge, Mercury had always been considered a ‘lower-medium-priced' car. Breech had a plan that would change this perception and move the Mercury up-market to compete with Oldsmobile, Chrysler, Buick and Desoto, leaving the Edsel to take over Mercury's previous position and compete more directly with Dodge and Pontiac.

By the end of the 1950's the bottom was beginning to drop out of the middle price car market as the 1958 recession effectively squashed Breech's plan. The sale of the Ford Edsel marque was an utter disaster.

At the beginning of the 1961 model year, cost cutting decision were put into effect following sales of Mercury products failing to reach the expected sales levels. One of Henry Ford II closest advisors, and consequently the Chief of the Ford division, Robert S. McNamara wanted to do away completely with Lincoln, Edsel and Mercury.

The basic Ford body shells were utilized in the early months of 1961 by Ford and Mercury and adorned with unique trim elements that differentiated the marques from each other. Following a short run of 1960 models, the Edsel was discontinued. In 1961, the new Mercury was originally intended as the 1961 Edsel.

Mercury deleted its higher priced Montclair and Park Lane models as a first step to combat this new vision. The Monterey, which had previously been the entry-level full-sized Mercury offering, was priced a bit higher for the 1961 model year in comparison to other 1960 models, and moved to the front as the new top-of-the-line model. The Monterey was joined by the new, cheaper Meteor 600 and Meteor 800. These two models were basically the Medalist and Custom models that had been featured in 1956. All full-sized '61 Mercury models rode on a 120' wheelbase.

The Meteor became a full-sized Mercury in 1961 and was set apart from the Monterey by its trim and taillights. The 600 featured oblong taillights, while the 800 and up-market Monterey's utilized six circular taillights, three on each side. Only available as two and four-door sedans, the Meteor 600s showcased chrome spears from the taillights to the front wheels. The Meteor 800's were only available in two and four door sedan and hardtop body styles that featured the spear and three chrome bars on the front fenders, chrome fender fin trim, rocker panel trim and back-up lights.

Comparably trimmed to the Meteor models was the Mercury Commuter 4-door station wagon, while the Colony Park was trimmed closely to the Monterey and featured simulated wood-grain trim on the side-panels.

The standard transmission for the Mercury Meteor was a 3-speed manual with overdrive that was available as an option. Other optional transmissions available were Merc-O-Matic and Multi-Drive automatic transmissions.

The marketing team at Mercury made the executive decision in 1962 that the Monterey nameplate had better consumer recognition that the Meteor nameplate in regards to full-sized vehicles. So they chose to assign the Meteor name to a new line of mid-sized vehicles that were based on the Ford Fairline, which was based on a long-wheelbase version of the Ford Falcon chassis. Filling in the product gap between the full-sized Monterey and the compact Ford Falcon-based Mercury Comet was the new smaller, mid-sized Meteor.

The 1962 Meteor shared the Fairlane's 116.5 wheelbase and featured unique rear quarter styles in the pattern of senior Mercury's jet pod taillights. The Meteor Custom and the base Meteor were available in two and four sedans. A special model, the Meteor S-33 was trimmed uniquely and was sold as a two door sedan that featured premium exterior trim and interior appointments and included bucket seats.

The trim was updated on the Meteor for the following year. Two new body styles, a four-door station wagon and a two-door hardtop coupe were also added to the Meteor lineup for 1963. Both the Meteor series and the Meteor Custom series received the four-door station wagon. The wagon was called the Mercury Country Cruiser in the Meteor Custom series and featured simulated wood-grain trim on the outside. The Meteor Custom and Meteor S-33 series received a hard-top coupe which replaced the 2-door sedan in the Meteor S-33 series.
Standard on the newest models was a three-speed manual transmission while overdrive and Merc-O-Matic automatic transmission were optional, along with a 4-speed manual transmission. For 1963 the base Meteor engine was a 170 cubic inch displacement inline 6-cylinder engine with a 1-barrel carburetor that generated 101 horsepower at 4000 rpm. Optional engines for the Mercury Meteor included a 221 cubic inch V8 with 2-barrel carb generating 145 horsepower and a 260 cubic inch V8 that generated 164 horsepower.

Unfortunately the sales of the mid-sized Mercury Meteor were very disappointed, and the decision was made to drop the model at the end of the 1963 model year. For 1965 the Mercury would be marketed as being ‘built in the Lincoln tradition'. The compact-bodied Comet was deleted, and though Mercury featured no mid-sized vehicles for the '64 and '65 model year, the compact Comet continued to sell well. The Comet name had better recognition than Meteor, and the Comet name was transferred to the Mercury mid-sized vehicle, the Meteor model and name that had been last built and used in 1963.By Jessica Donaldson
Mercury Models
Capri
Colony Park
Comet
Cougar
Cyclone
Grand Marquis
Marauder
Mariner
Marquis
Messenger
Meteor
Milan
Monarch
Montclair
Montego
Monterey
Mountaineer
Park Lane
Sable
Voyager
Zephyr