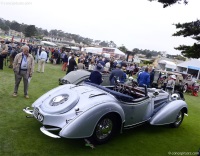 1936 Horch Model 853
Average Auction Sale: $569,267
Median Auction Sale: $544,000
Chassis Profiles
Total Production: 619 1935 - 1940
August Horch began producing vehicles with Karl Benz prior to 1899, after which he began building vehicles under his own name, August Horch & Cie. In 1909, after disputes with shareholders, he departed from his company and founded Audi, which is the Latin translation of his surname. The production of the Horch automobile continued without their founder using his name.

In the early part of the 20th century, the automobiles began to appear less like horseless carriages and more like automobiles. The tiller steering and high buggy wheels became a thing of the past and the engine found its way to the front of the vehicle.

In 1926, a new model was introduced powered by a straight-eight engine. This engine was used by the company for many years. Over the years it displacement size grew as did the horsepower rating. This engine was instrumental in providing the power-plant necessary to propel the luxurious Horch automobiles to quick speeds while maintaining a competitive price. As was the case with most early automotive manufacturers, Horch would either build the entire vehicle or merely supply the chassis for a coachbuilder to outfit the vehicle.

Horch was instrumental in continuing the growth of Audi as a company and on the race track. During World War I, the direction of Audi switched to producing vehicles for the military.

As was the case for most automotive companies, times were changing and becoming increasingly difficult to stay competitive and stay in business. In 1932, due to financial problems, August sold Audi. It became part of Auto Union. Auto Union was comprised of Horch, Das Kleine Wunder, Audi, and Wanderer. The Union was essential a way to continue the production of automobiles while providing the financial support necessary to fuel automotive racing and technology.