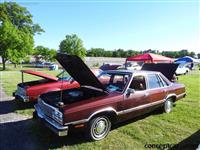 1979 Mercury Zephyr
Original Price: $3,875 - $4,320
Average Auction Sale: $1,142
Median Auction Sale: $1,142
Recall information
Chassis Profiles
The Mercury Zephyr was produced from 1978 through 1983. This name had a history with the Ford Motor Company, as it had been used on the luxurious and elegant Lincoln's of the pre-War era. In 2006, the name re-appeared on the Lincolns.

The Mercury Zephyr was similar to the Fairmont vehicle of the day. It was available with a four, six, or eight-cylinder engine and could be purchased in coupe, sedan, or station wagon body styles. A limited production, 2-door version of the Zephyr dubbed the Z-7, was also part of the lineup. The Z-7 2-door coupe had a wrap over roof design and wraparound taillights. The most common engine found in the Z-7 was either the six or eight-cylinder engines, though a few were fitted with the four-cylinder units. Most of the Z-7 vehicles had a two-tone paint job.
By Daniel Vaughan | Dec 2008