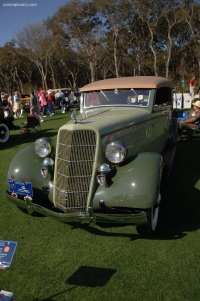 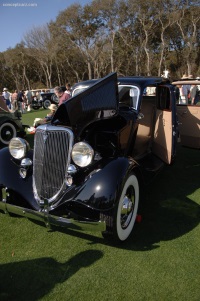 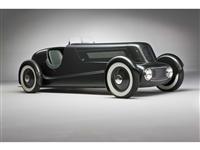 The design was curveacous with a one-piece bumper and streamlined appearance. All bodies, regardless of the bodystyle or the color, were delivered with black fenders.

The V-8 engine was well received. When first introduced in 1932, there were over 200,000 examples sold during that year. It outsold the four-cylinder Model B cars, which reached 185,000 units. Evolutionary upgrades were made to the engine throughout its production run. Earlier improvements included an improved ignition and cooling system, with a new aluminum head that had a compression ratio of 6.3:1, giving horsepower a boost to 75.

The new design was influenced by British styles. The Ford Motor Company, Ltd, had been operating in Britain since 1911 and the Model T proved popular there.

Ford enlisted the help of Eugene Turenne Gregorie , called 'Bob' by his friends, to help in the design. 'Bob' had designed yachts for the Elco Corporation and at Cox and Stevens, a New York naval architecture firm. He had also worked at coachbuilders Brewster & Company. His work at Brewster brought him to the automobile industry and soon became well-regarded for his talents.

Gregorie used his nautical background to create a slanted flat windshield back, and employed a similarly sloped grille whose silhouette suggested a heart shape. The doors were hinged at the rear and opened in 'suicide fashion. The headlamps were mounted directly to the fenders.

This new design was introduced as the Model Y in February 1932. The Model Y was well received and quickly put into production. For the 1933 American Ford, Edsel wanted a more graceful design than the 1932 style.

For the 1933 model year, and with the longer wheelbase, the design of the Model Y was simply scaled up. The Model Y's proportions were mechanically scaled.

The public responded, with sales for 1933 models increasing some 40 percent over dismal 1932 sales.
By Daniel Vaughan | Dec 2009