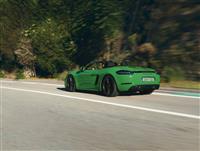 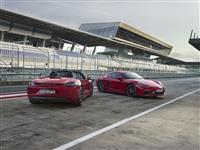 The Porsche Boxster was introduced near the close of 1996 and is one of the companies smallest and least expensive vehicles offered for sale. Though this may be true, the mid-engined roadster is still a Porsche with superior performance, power, and styling. Internally, the Boxster is known as the 986/987, a naming scheme that Porsche has used since its existence. The name 'Boxster' is a combination of 'roadster' and 'boxer'. Boxer represents its horizontally-opposed engine which has its pistons moving in a boxing-like motion. The roadster represents the vehicles convertible top.

The styling is credited to Harm Lagaay and borrows heavily on the Porsche Spyder and Speedster. Immediately, the Boxster was popular and became Porsche's biggest volume seller. It would retain this title until 2003 when the newly introduced Cayenne SUV took away the title. From its introduction, magazines, journalists, and enthusiasts have been awarding the car with distinguished titles and accomplishments. It has been award Car & Drivers 'One of the 10 Best Cars of 1997', Automobile's 'Automobile of the Year', Business Week 'One of the Best New Products of 1997' and more.

When introduced, the Boxster was powered by a 2.5 liter flat six-cylinder engine that produced just over 200 horsepower. In 2000 the engine was upgraded to a 2.7 liter unit that raised horsepower by about 25. An 'S' variant also became available which added the 3.2 liter 250 horsepower engine. Porsche continued to improve the Boxster and by 2004 was offered a 240 horsepower engine as standard. The 'S' was producing an astonishing 280 horsepower.

The first version, the 986 was produced from 1996 through 2004. The upgraded engine brought about the 987 which began life in 2004. It was debuted to the public at the 2004 Paris Motor Show where it shared the stage with the new 911 997. Visually, there was little change for the 987 to the 986. The headlights of the 987 are more true to the Porsche designs of the past. The side intake vents became larger.