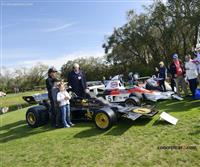 1970 Lotus 72
Chassis Profiles
By 1970, the Lotus 49, and its evolutions, remained a viable competitor, but for Colin Chapman, that success was not good enough. To a man consistently leading the way in the area of innovations, his Lotus 49 looked like an old dog. That would soon change and it would come in the form of the Lotus 72.