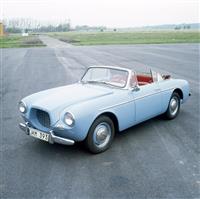 1956 Volvo Sport
Average Auction Sale: $59,400
Median Auction Sale: $59,400
Chassis Profiles
Total Production: 67 1956 - 1957
When Volvo presented an open 2-seater sports car with a body made of fibreglass-reinforced polyester in 1954, it was something of a sensation. However, the car did not go into production until 1956 and, after a great many problems, production was wound up in 1957. By this time, 67 cars had been built.

The original idea was that this car would only be for export. A convertible was not regarded as wholly suitable for the Swedish climate. However, in spite of this, most of the cars were sold on the domestic Swedish market.