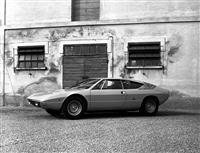 1970 Lamborghini Urraco P250
Chassis Profiles
Total Production: 520
The Lamborghini Urraco was made from 1972 through 1976. Bertone had been tasked by Lamborghini to create a small, mid-engined car. The name 'Urraco' was given, meaning 'little bull'. Two running prototypes, both similar in design, were created. The first prototype had pop-up headlights while the second used a built-in headlight configuration design. Other items distinguished the two such as the use of a rear spoiler and a front-hood air extractor on the pop-up headlight prototype. Ferruccio Lamborghini was not satisfied and tasked Bertone to create a third prototype. Bertone's Marcello Gandini produced the third and final prototype which eventually evolved into the P250 Urraco production vehicle. This version was similar to its predecessors except for minor aesthetic changes such as moving the pop-up headlights further forward. Once the design was approved, three preproduction prototypes were developed for further development. The 'B' pillars on the production vehicles had a sixty-degree slant where-as the prototypes were angled at forty-five degrees. The production vehicles had 15 hole Campagnolo wheels while the prototypes had 20-hole Campagnolo wheels.
One of the preproduction prototypes was destroyed in crash testing. One was used in promotional literature.

The Urraco was debuted to the public at the 1970 Turin Auto Show. Lamborghini's goal for the vehicle was to create an affordable, high production, entry-level, and exotic automobile.

The P250's were powered by a eight-cylinder engine in 'vee' configuration capable of producing 220 horsepower. The engine had been designed by Paolo Stanzini. It was placed ahead of the rear wheels, mounted transversely, and sat beside the transmission. A five-speed all-syncromesh gearbox was standard. At their initial offering, the cost of owning a P250 would set the buyer back $22,500 American dollars. During its production run, 520 examples were produced.

During the Urraco's production lifespan, nearly 800 examples were produced. This encompassed all series including the P111, P200, P250, P300, and Urraco Bob Series. The P111 series was one of the lower produced series. The goal for this series was to modify the engine to comply with the United States emissions regulations. The result was a car that produced a mere 180 horsepower. Sales were slow and production lasted only temporarily.
By Daniel Vaughan | Jun 2010The modern Lamborghini has one of the most iconic shapes in car design. It is a shape that has evolved constantly over the last few decades, borne of the first Countach and kept alive by the current Murciélago. It is a shape that has eschewed the organic lines of traditional sports cars in favor of cold, sharp edges and surreal forms that could not possibly have been inspired by anything on Earth. It is alien and intimidating, equal parts performance car and predator. The Lamborghini has developed one of the most distinct appearances to ever shroud an automobile.

The clarity of Lamborghini's design language over the last 35 or so years, though, was not present at the carmaker's birth. The first Lamborghinis were carefully proportioned grand touring cars, with shapes that emphasized pleasing the eye over intimidating the competition. But Lamborghini established a strong identity quickly, and by the time the Lamborghini Miura was released for 1967 the company was on its way to writing the definitive rulebook of supercar design.

Despite the Miura's dazzling performance, stunning looks, and revolutionary spirit, though, Lamborghini was still something of a confused company into the 1970's. Models like the Jarama and Espada, with front-mounted V12s and back seats, suggested that Lamborghini wanted to continue building lavish grand touring cars. The Miura, followed by the awesome Countach, conversely pushed Lamborghini towards its current role as a builder of singular supercars.

The Lamborghini Urraco, always overshadowed by its mightier siblings, was a product of this confused time at Sant'Agata. Its 2+2 configuration hinted at Lamborghini's grand touring roots. Its sinister styling suggested its ties to the Miura and, from 1974, the Countach. Its fresh V8 engine meanwhile hinted that the Urraco was a new type of Lamborghini altogether.

The Urraco was introduced in 1972 as Lamborghini's entry-level model. Its closest competitors were the Ferrari Dino 246 and Maserati Merak. The Urraco's V8 engine, a new design by Paolo Stanzini, gave the Urraco more bite than its V6-powered competition. Its styling, though not as pretty as the Dino's, was a sure step towards Lamborghini's developing design language. Marcello Gandini, probably the most important Lamborghini designer in the carmaker's history, was responsible for the Urraco's fiery looks. Impressive style and power, coupled with a price that was relatively affordable compared to other charging bulls' adoption fees, allowed the Urraco to sell in relatively high numbers over the course of eight years. Throughout its production run, several versions of the Urraco were sold.

The initial version of the Urraco was the P250. This model was produced from 1972 to 1976, during which time 520 examples were built. The P250's oversquare V8 displaced 2,463cc and made 220bhp at 7,500rpm. Torque was rated at 166ft-lbs at 5,750rpm. The engine breathed through four 2bbl Weber carburetors and was mounted transversely behind the cockpit, keeping the mid-engined layout compact. The P250 bodies, like all Urraco bodies, were built by Bertone.

Based on the P250 but with unique features for the American market was the P111. Only 21 Urraco P111s were built, all with bigger bumpers and bulky marker lights to meet U.S. safety requirements. The Weber carbs were replaced with Solex units to satisfy U.S. emissions standards, lowering power to 180bhp.

Another limited-production Urraco was the P200 of 1975-1977. This model was built for the Italian market and used a reduced 1,994cc displacement in response to heavy home market taxes on cars displacing more than two liters. Despite the decrease in engine displacement, the P200 still made 2bhp more than the American-market P111. Only 66 were produced.

The Urraco was the product of a pivotal moment in Lamborghini's history, when a somewhat confused carmaker was slowly trading in its grand touring style for raw, visceral, and devastatingly powerful supercars. The Urraco doesn't have quite the animalistic appeal of the Countach, but it is a progenitor of the modern Lamborghini spirit and a magnificent car in its own right.