1999 Ford Falcon XR8
One of the biggest selling names in worldwide automotive history, the Ford Falcon has been sold since 1960. Original production began in 1959 at Broadmeadows, Victoria in Australia and was manufactured by Ford.

Still remaining the most popular Ford model in Australia, today the Falcon is only built in this country and production still continues steadily.

Since 1960 when the model was first introduced, over four million Ford Falcon's have been manufactured in various versions. Available in sedan, station wagon, panel van and as pickup trucks (or more commonly known as ute in Australia) the Falcon has been a versatile automobile.

The Falcon has became signaturely popular as both taxi cabs and police vehicles in Australia and New Zealand. Other well known uses for this Ford line were rebuilt versions made into stretch limousines and hearses.

The 'XK', a right hand drive version of typical Falcon's that were sold in the U.S. debuted September of 1960. Due to lack of durability, this model was not considered to be a popular success on rough terrained outback roads.
The next two years brought modifications and design changes to the 'XK' to authenticate it to Australian terrain.

Redubbed the 'XL' this more modified vehicle came with several updates including a heavier suspension system.

Unfortunately, this model was also not considered durable enough and failed in the Australian market for the beginning years.
Ford refused to give up, and after several years noticed a steady rise in market sales.

1964 introduced a new version of the Falcon to the Austrailian public. The 'XM' was the first version that carried an Australian-designed body.
After the 'XM' was the 'XP' which was considered to be an upmarket variant and claimed the prestigious Car of the Year title for 1965 by Wheels magazine.
Ford Falon variants have been designed to race in touring car races held in Australia for many years. In 1969 the'XW' which came with a bigger V8 was 351 cubic inches and produced up to 291 hp (217kW) and the Canadian designed 'Windsor' engine. This GT model is still considered to be a valuable collectable model today.
1970 brought the XY with the a 'Cleveland' 351 being the sole difference as it replaced the Windsor. The XY produced 300 hp (224kE).

Producing 385 hp (287 kW), the semi-legendary 'XY' GTHO Phase III was the next updated version of the Cleveland in 1971. These were rare and only a few were built.
US production dwindled to a halt soon after as what became known as the 'Supercar Scare' in 1972 imacted the sales of street legal supercars that could top 220 km/h.
The end of production in the US paved the way for much greater Australian input in the design of Australian-made Falcons, from 1971 onwards and the Falcon still remains a popular car today in Australia.
Making up the majority of Australian state police fleets, the Ford Falcon (along with its rival the Holden Comodore) are modified and upgraded to accommodate this popular trend. Dual airbags, sports suspension and a limited slip differential have been transitioned to provide comfort and safety to police officers.
To accommodate speed detectors, both radar and police radios, a police-certified speedometer, map reading lamp and room to faciliate emergency lights, the police version is also modified with a heavy duty battery, alternator and wiring.
In New South Wales, Queensland, Victoria, Tasmania and many other territories in Australia the sedan versions are the most populer used police vehicles today.By Jessica Donaldson 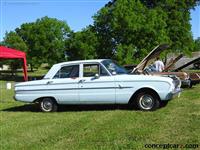 1961 Ford Falcon
Original Price: $1,912 - $2,267
Average Auction Sale: $11,280
Median Auction Sale: $9,125
Chassis Profiles
In 1955 the decision was made to launch an Australian-built Ford. At this time it was decided that Ford Australia would construct the Zephyr locally from the ground up instead of just assembly the parts that came by ship from Dagenham in the U.K. Ford Australia managing director Charles Smith decided in 1958 following a trip to the USA that the vehicle wasn't right for the local market. After seeing a mock-up of the Falcon that was being designed for the Canadian and American markets, Smith thought this was the perfect vehicle for Australia.

On September 2nd, 1959, the Falcon made its official debut with the XK and at the time it was described as a 'compact' because it was smaller than the popular family vehicles of the period. The Ford Falcon was debuted in the first nationwide closed-circuit TV news conference. The successor to the XK was the XL and both were based on Canadian designs with only some minor updates for Australian conditions. In 1964 the Falcon XM was launched. Updates were made to the Falcon that included updates to the front and rear suspension, along with the clutch, rear axle, the braking system and engine mounts and exhaust. Considered to be the 'Model T of its day' the Ford Falcon was always easily recognizable by red 'pie-plate' taillights.

Debuted in 1960, the Falcon was produced until 1970 and was offered in a variety of shapes and sizes that included two and four-door sedans, station wagons, 2-door hardtops, convertibles, sedan deliveries and Rancheros. Actually the original mustang was an evolution from the development of the Falcon. A variety of the chassis pieces and the design elements were Falcon pieces used to build the original 1964 ½ Mustang. Lee Iacocca is responsible for this idea and if there had been no Falcon, there would have never been a Mustang. Though there were many similarities to the Mustang, the Falcon and Mustang definitely hold their own in design, new product development and features.

The original Ford Falcon platform was designed with comfort and family in mind, with enough room to store both the kids and the groceries and roomy enough for 6. Meanwhile, the Falcon still maintained the fuel economy and savings after all of the gas-guzzling monsters of the 1950s. The recession had taken a hard toll on the US economy and the Falcon was welcomed with open arms by car buyers. First Falcon models came with very basic features and standard trim. The color was limited and the Falcon was fitted with 144 cubic inch six-cylinder engines with 3-speed manual and 2-speed automatic transmissions.

Almost immediately the new Falcon was a success and more than one million total units were sold by 1962. The Falcon was offered in several new models thanks to the sales and interest and it now included the Falcon Futura and Sprint. In 1961 the Futura model was released and came with very appealing exterior ornamentation and new deluxe interior trim with floor console and bucket seats. On the Futura model, standard equipment included the 144 six cylinder engine that was capable of '32.68 mpg' in Ford testing. For the Falcon in 1961 the new 170 special six-cylinder was an upgraded six with more hp, available as an option.

For 1963 the Ford Falcon Sprint featured two major updates. The all-new 260 V8 engine was now available from the factory and the new Falcon convertible was available in both Sprint and Futura models. The Sprint came standard with 260 V8 engine, exterior molding, 6,000 rpm tachometer along with deluxe interior trim package. Buyers could purchase the Sprint with a factory 4-speed on the floor.

In 1964 Ford introduced a brand new finned body design and continued this style through 1965 on both the Falcon and the Rancheros. Compared to the earlier rounded lines of earlier Falcons, this new style was quite an aggressive change. This new model proved to be just as successful with the public as the previous model. In 1965 the Ford Falcon changed to the 289 V8 engine, offered for the first time in the Falcon.

When Ford Australia launched the XP Falcon in 1965 they were attempting to convince local fleet buyers of the durability and energy of the Falcon and created the XP Durability Run. The run involved pushing five standard Falcons and a group of racing drivers to limit around the You Yangs Proving Ground with the goal of clocking 70,000 miles at an average speed of 70 mph per hour, per car. The five cars averaged a speed of 71.3 miles per hour after nine days driven at the limit. The Falcon was named Wheels Car of the Year in 1965.

A new shape and an even larger size was introduced in 1966 with updated body lines. The Falcon was more of a mid-size vehicle now and favored the Fairlane size frame and was now more practical. In 1966 a total of 182,669 Falcons were produced and sold. Still available as a Futura model, the Falcon was newly available as a new 'sports coupe' model.

For the 1967 model year, the Falcon underwent very few changes except for the addition of a 225 horse 289-V8 engine. Unfortunately, the volume for this year was reduced by 65%. For 1968 and 1969 the Falcons only changed slightly, but thankfully sales almost doubled from the previous year and capped at 131,419 models. The Falcon name was used on the Torino body frame in 1970 and was dubbed the '1970 ½ Falcon'. This was also the final year of production for the Falcon name. These classic Fords have increased in popularity over the years and today they are highly sought after by Ford enthusiasts.By Jessica Donaldson