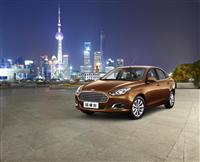 The name 'Escort' was first applied to a Ford vehicle in the 1950s and was used on an estate car version of the Ford Anglia 100E. It became its own model in 1967 and served as a replacement for the Anglia. It was originally a European model that would later become adopted by the North American market in 1981. The first generation of Ford Escorts in the US shared many components with its European counterpart and with the Mercury Lynx. The production of the Lynx would continue until 1987. The Escort came in a variety of body styles, including a four-door station wagon and a two-door hatchback. The four-door hatchback was introduced in 1982. The Escort sat atop a 94.2-inch wheelbase and was powered by a 1.6-liter engine and matted to a four-speed manual gearbox. A five-speed manual unit and a three-speed automatic were offered as optional equipment. A 1.3-liter unit had been used during development and testing but it did not have adequate power, so it was replaced by the larger 1.6-liter unit. A turbocharger was offered in 1983 and 1984 which boosted power for the 1.6-liter engine to 120 horsepower.

Again, the Escort was offered in a variety of body styles that included a three-door hatchback, four-door sedan, station wagon, and hatchback. Engine options included 1.8- and 1.9-liter units matted to either a five-speed manual or four-speed automatic gearbox. The 1.8-liter engine, used on the LX-E and GT produced around 127 horsepower while the 1.9-liter unit produced 88 horsepower. Trim levels included the LX, Se, and GT. The GT version was similar to the European XR3i and offered solely as a three-door hatchback.

Production of the second generation of Escorts continued in North America until 1996. It was replaced by the third-generation which was introduced in 1997 and continued in production until 2002. The hatchback was no longer offered; in its place was a coupe named the Escort ZX2. A 2-liter engine now sat under the hood. Transmission options included a five-speed manual and a four-speed automatic. Bodystyles included a four-door sedan or four-door station wagon. The ZX2 was a 2-door coupe which remained in production until 2003. In 1999, Ford ceased production of the Escort wagon and its counterpart, the Mercury Tracer.
By Daniel Vaughan | Jan 2007
Originally a European model, the Escort badge has been applied to various designs in North America over the years. From 1955 until 1959, the Escort name was first used in the United Kingdom for a variant of the side-valve-engined Ford Squire. Manufactured by the Ford Motor Company, the Ford Escort was a compact vehicle produced from 1967 through 2003.

Many enthusiasts believe that the Ford Escort Saga began in 1968 with the release of Britain's replacement for the Anglia, though Ford has owned the Escort name for many years. Ford of Europe attempted for dual production in Germany, but was initially considered too conventional and not advanced enough for production. Eventually, dual production was set up after much persistence by Ford of Europe.

A total of 2,155,301 units were built between 68 and 75, and the vehicle topped the sales and production charts rapidly. The Escort was responsible for aiding Ford of Germany to recover 2.2 percent of the domestic market by 1969. It also became the second top-selling vehicle in Britain in 1972 as it took over the BMC 1100/1300 series, eventually becoming Britain's number one manufacturer, and the only vehicle to reflect a profit in 1975.

Both in Britain and on the Continent, the Escort became a legendary icon. At the same time the Escort was launched, Ford prepared a rallying version. This version was eventually marketed as the Escort Mexico, which commemorated the vehicle's victory in the London to Mexico rally of 1970.

The Escort was a vehicle that caught hold of the youth market. With a 1600 cc engine, the standard model came with an amazing 1100. In 1974, the RS 2000 model was the next to follow. In 1975, the squared-off Mark II version was the next to follow and fortunately was responsible for furthering the reputation of its predecessor. Both the Escort Mexico and the RS 2000 models were reaching great success, and new sports and luxury versions were being introduced. In 1968, 1969, and 79, the Escort won three World Rally Championships.

Two-liter Escorts were more commonly found in Australia, a country where big-capacity vehicles sell well. It was Ford's expertise in export markets that aided in the word spread throughout the world. The Escort was going into its third generation as a 'world car' by 1980, though the title wasn't exactly accurate. While Asia, Africa, and Australia were selling a rebadged Mazda 323 as the Ford Laser and Meteor, the American Escort/Mercury Lynx only shared a small number of parts with its European sibling.

The Escort was considered to be revolutionary in styling terms, with its modern squared-off hatchback, along with an aesthetic rear bustle developed in the style of Ford's Japanese partners, Mazda. An XR3 model for Europe was introduced, which was later replaced by an XR3i, and at the same time, the RS 2000 and Mexico were deleted. This set in place a new trend that forced Ford's Advanced Vehicles Operations to now develop XR versions of other Ford models. At this time, both the Princess of Wales and Sarah Ferguson owned and drove Escorts.

In America, the Escort became more of a commodity rather than an icon like its European counterpart. The Escort was viewed as Mercury and Ford's answer to the Honda Civic and the Toyota Corolla. Becoming the world's top-selling nameplate for most of the decade, the Escort was hugely successful on both sides of the Atlantic. Unfortunately, the Escort couldn't be the world's top-selling vehicle, as Japan won that race for putting out the most single models for the world. The Escort-based EXP and Mercury LN7, sport coupes, did attempt to boost the small car's image at the lower end of the market in the USA.

The Laser replaced the Escort in Australia in 1980, but it never reached the height of popularity that the Escort had. The Laser lacked the Escort's following, though the Laser TX3 and the 1994-6 Laser Lynx introduced a bit of flair to the range. Considered to be the best-looking Australian-designed vehicle, the Laser Hatchback was definitely the most pleasing to view.

Special variants of the European Escorts were introduced that included the RS 1700 T, the Cabriolet, and the RS Turbo. Besides these new models, not many changes or updates were made to the European Escort until 1990. In 1990, the fourth-generation was a departure from the 'world car'.

Considered to be a disappointment due to cost-cutting that put the Escort near the bottom of its league, the American Escort was now a re-skinned Mazda 323. The 1990-2 models were found to be flawed by BBC's Top Gear, and it wasn't until 95 that the issue was fixed. But unfortunately, by this time, the Escort no longer held the same affection by the motoring public.