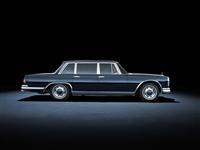 1963 Mercedes-Benz 600 Pullman Landaulet
Chassis Profiles
Total Production: 2,677 1963 - 1980
A representation of the absolute pinnacle of automobile engineering the Mercedes- Benz 600 was introduced in 1963. The 600 has been owned by such famous people as Elvis Presley, John Lennon, Jason Kay, Hugh Hefner, Elizabeth Taylor and Aristotle Onassis.