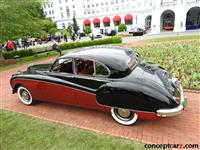 1959 Jaguar MK IX
Original Price: $6,030
Average Auction Sale: $30,036
Median Auction Sale: $33,000
Chassis Profiles
Total Production: 10,009 1959 - 1961
The Jaguar Mark IX was produced for a short three years from 1959 through 1961 with just over 10,000 examples created. It was used as a replacement for the Mark VIII and was later replaced with the larger Mark X. The MK IX was very similar to the vehicle it replaced with the most visual changing occuring on the interior where it had been given a slightly modern facelift.

The Mark IX was powered by a 3.8 liter DOHC straight-six cylinder engine that produced adequate power to carry the vehicle along at respectable speeds. Four wheel disc brakes were standard along with the power steering.
By Daniel Vaughan | Feb 2011Life changed after World War II. After five years of war, Britain emerged worn-torn and weary, but ready to enjoy life. The technology of the war years was finding its way into the post-war racing scene and into car production. This turned a number of would-be passengers into drivers. And Jaguar was in a prime position to take advantage of this shift in thinking. The Jaguar MK IX represents one of the first and finest examples of the owner-driver luxury car.

Back in 1956, Jaguar introduced its big Mark VIII at the London Motor Show. Similar to the Mark VII, the new car's interior featured more luxurious appointments and fittings. The large, rectangular grille was accented by chrome and large headlights. This was a change from its predecessor. Chrome trim applied to the car's waist allowed Jaguar to create two-toned paint schemes, which further caused the car to be reminiscent of the more luxurious chauffer-driven cars like Rolls-Royce and others.

Introduced in 1959, the Mark IX replaced the Mark VIII, but, bore a striking resemblance to the car it replaced. The large, rectangular-shaped chrome grille remained for the Mark IX. It too offered chrome trim and two-toned paint schemes. Though bearing great similarity with its predecessor on the outside, the 'new' parts of the car were more noticeable inside the passenger compartment, and in areas less visible.

The interior was offered with a number of luxuriant appointments, including copious amounts of fine inlaid burl walnut, vat-dyed Connolly leather seats and doors, Wilton carpeting and a standard sunshine roof. Drawing from the company's racing success, the Mark IX was one of the first production cars to offer four-wheel disc brakes, developed by Dunlop.

Power for the 4,000 pound cat came from an enlarged 3.8-liter, 220 bhp dual overhead cam straight 6-cylinder engine. The power was delivered to the wheels by a Borg Warner three speed automatic gearbox. However, a four speed manual transmission and overdrive were offered as optional.

Ride comfort and handling was controlled through torsion bar independent front suspension and a leaf sprung live rear axle. Each of these suspension features were retained from its Mark VIII predecessor.

Besides the more important luxurious features, the large, 120 inch wheelbase also enabled the interior to be roomy and comfortable. It also allowed for a large, deep trunk. The deep trunk allowed for the car's spare tire to be fitted vertically inside of it, although taking away from the overall available trunk space.

Some of the car's more interesting features were found by exploring the number of recessed compartments around the car and by taking it for a spin, especially at night. A number of the recessed compartments would feature basic tools necessary to work on the car. The steering wheel had the ability to telescope. Interestingly, the Mark IX was fitted with black-light bulbs for the illumination of the dash. The rear seat passengers were able to enjoy twin picnic tables, a clock and a locking center cabinet.

Surprisingly, the big cat was also a solid performer. It could go zero to 60 mph in 11.3 seconds. The car had a top speed of 114 mph. The power and the disc brakes have also caused the Mark IX to become a common choice for Goodwood's 'Revival' meetings.

Nose to tail, Jaguar's Mark IX was and is a truly aesthetically pleasing car. But its true luxuriousness comes from seeing and feeling this big cat. The car's performance, ride, comfort and looks make it absolutely understandable why the Mark IX was able to compete with Rolls Royce and other luxurious automobiles. Comfortable at speed and on a slow drive in the summer sunshine, the Mark IX provided a truly wonderful way to experience and enjoy the world and life.