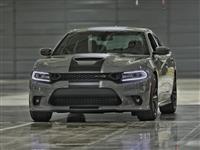 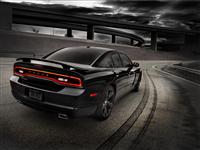 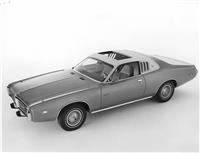 1966 Dodge Charger A/XS
Chassis Profiles
The Dodge Charger was produced from 1966 through 1978, 1983 through 1987, and again beginning in 2006. Since its inception, the impressive performance and stylish bodies made the Charger an instant success. During its introductory year, 37,344 examples were produced.

The Dodge Charger was based on the Dodge Coronet platform, but with a fastback roofline. The headlights were retractable which resulted in a sportier appearance for the vehicle. The interior had four bucket seats with the rear seats able to be folded down that provided ample space for cargo. Under the hood was a 318 cubic-inch eight-cylinder engine that produced 230 horsepower. Optional was the 361 and 426 cubic-inch Hemi, available in various configurations. The 426 Hemi produced 425 horsepower and would set the buyer back $1000, a considerable cost considering the base price was $3122. Only 468 of the Hemi option were purchased.

In 1967 Dodge added the 440 cubic-inch Magnum to the Charger model line. With 375 horsepower, it was a cheaper option than the Hemi and easy to tune. The 318 cubic-inch was still the standard option with the 426 Hemi the top-of-the-line producing 45 horsepower and 490 foot-pounds of torque. The production total for the Charger in 1967 was around 15,000 with 118 of those selecting the Hemi engine.

The 1968 Charger was redesigned, now with hidden headlights and a curvy body. The design was a success and sales soared to over 92,000 units. The Hemi option was available, with around 470 buyers opting for the option. The R/T package was a popular option with 17,665 buyers. Standard on the R/T performance package was the 440 Magnum engine producing 375 horsepower. Many argue that the 1968 was the most appealing muscle car of all 1960's era.

For 1969, Dodge decided to make only minor improvements to the Charger. The grille now had a chrome center divider. Two new Charger models were available. The Charger 500 was a performance machine with some styling cues similar to the Dodge Coronet. The big news was the Dodge charger Daytona which is easily identified by its larger vertical tail stabilizer and front nose extension. With just over 500 examples of the Daytona produced, the $4000 vehicle was available with either the Hemi or the 440 engine.

The Charger was redesigned in 1970 and became available in new colors. The SE version added leather seats and an electric sliding sunroof. Dodge introduced the 440 Six Pack which featured three Holley two-barrel carburetors and produced 390 horsepower. In total, there were just over 10,300 Chargers sold in 1970 with 42 of those sales including the 440 Six Pack and 116 opting for the Hemi.

The muscle car era was coming to a close. Government safety regulations, emission controls, and insurance premiums were beginning to force manufacturers into detuning their engines. This was the last year for the mighty Hemi engine, which retained it 425 horsepower rating. The 440 cubic-inc engine was now rated at 370, down by 5 horsepower. The 440 Six Pack also lost five horsepower. The Charger was redesigned and lost a few inches at the wheelbase. Available in SE and R/T trim, it now shared a body with the Super Bee. This body-style design lasted until 1974.

The Charger's appearance became sportier in 1974, with minor aesthetic changes and larger quarter windows. The 318 V8 was rated at 175, the 440 V8 produced 280, and the 440 Six Pack produced 330 horsepower. The engine choices remained the same for 1974 but it would be the final year for its sporty persona. In 1975, Dodge repositioned the Charger as a luxury vehicle. They introduced the Charger SE, a near-clone of the Chrysler Cordoba. The SE came equipped with lots of standard equipment and a 360 cubic-inch engine producing 180 horsepower. The slant-six 318 and 400 were available in various configurations. The 360 fitted with a four-barrel, instead of the standard two-barrel carburetor, would increase the horsepower to 200.

In 1978, Dodge replaced the Charger with the Magnum which was basically a name change because the Magnum was identical to the Charger SE. The Charger name has reappeared in recent times, a tribute to the muscle-car phenomenon of the 1960's. The name was also used in the 1980's on the Dodge Omni.

The base engine, a 1.7-liter unit that produced 70 horsepower, was produced by Volkswagen. In 1983, Volkswagen ceased production of the engine. A new engine was found at Peugeot. Upon the addition of the new engine, Chrysler renamed the Omni 024 to Charger.

In 1984, quad headlights were added to the Charger making it easier to distinguish from its sibling, the Omni.

In 1987 production ceased for the Charger, Turismo, Omni, and Horizon.

Shelby Charger
In 1983 Carroll Shelby made modifications to the Charger that included both mechanical and aesthetic improvements, increasing the performance of the vehicle. All major aspects of the vehicle were updated, including the suspension, brakes, steering, engine, and transmission. The front-end was modified and racing stripes traversed the entire length of the vehicle. In its first year, over 8200 examples were sold.

In 1985 a MPFI turbo-charged was installed, raising horsepower to nearly 150. Little was changed in the following years with production ceasing in 1987 after nearly 16400 examples of the turbo-version produced. 1,000 of the last Dodge Shelby Chargers were purchased by Carroll Shelby and converted them into the Shelby Charger CLHS. The vehicles were rebadged with the Shelby logo replacing the Dodge logo. Using Knoi adjustable shocks and struts, the suspension was greatly improved. The tires were improved Z-tires and the intercooler and components of the Turbo II engine were installed. All were painted in black.

2005 Charger
source: Dodge
One of the biggest names from the muscle car era – powered its way out of its storied past and onto the stage at the 2005 North American International Auto Show in Detroit. The Charger coming off the line and out of garages create a new reputation for the Dodge legend, featuring a modern design to back up its 21st century muscle car power, sports car handling and cutting-edge technology.

With a 250-horsepower High Output V-6 engine or the optional 340-horsepower HEMI® engine powering large 18-inch rear wheels, the all-new 2006 Dodge Charger races into the car market with bold, provocative styling and substance without losing the convenience of a modern sedan.

Following the adage that 'racing improves the breed,' motorsports competition has long been part of the Dodge heritage. From engineering labs in Auburn Hills, Mich., to shop floors in Charlotte, N.C., Dodge, its teams and its dealers live the philosophy it takes to be successful in the ultra-competitive world of racing.
By Daniel Vaughan | Jun 2009