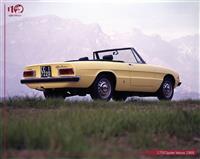 Power was courtesy of a 1779 cc twin-car four-cylinder engine which produced about 130 horsepower and 140 foot-pounds of torque. The five-speed manual gearbox was all-synchromesh with a hydraulic clutch.
By Daniel Vaughan | Nov 2006

'Every time I see an Alfa Romeo, I tip my hat,' said Henry Ford. A class completely on its own, the Milan based company has produced both auto sport and sports vehicles since 1910.