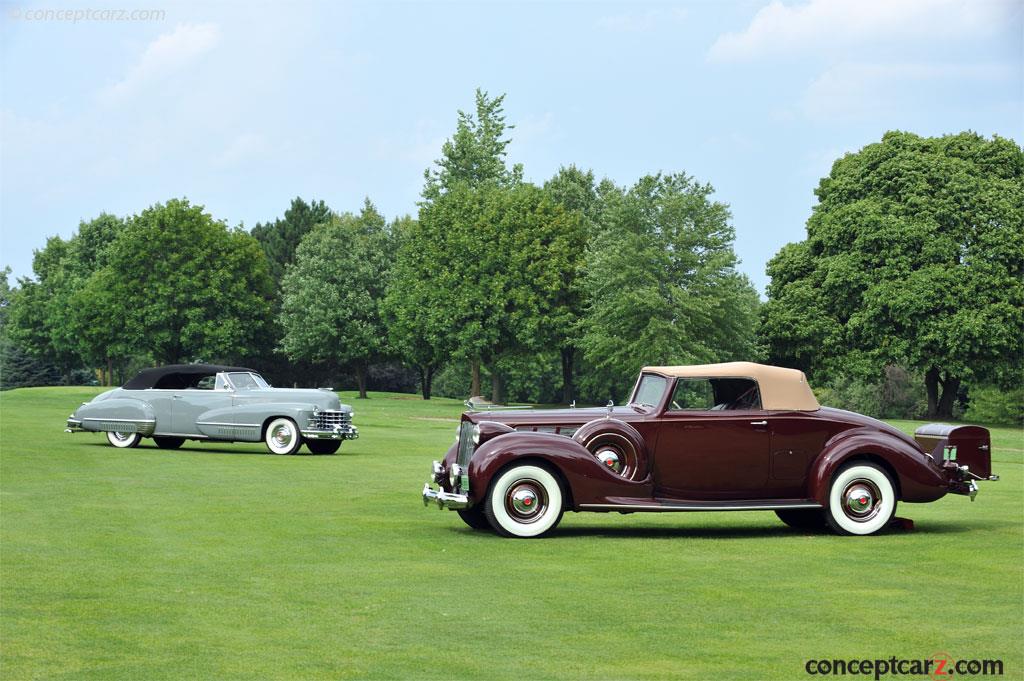 James Ward Packard was unhappy with his new Winton car and after returning it to the Winton factory behind a team of horses one too many times, he was challenged by Alexander Winton to build his own car. Packard accepted the challenge and not only built a reliable car but a company that would define the very meaning of luxury in the American car. The Packard built automobiles were exclusive to high society and it wasn't until 1935 with the introduction of the Model 120 that Packard became available to the middle class. The 120 was instrumental in saving the company from certain doom, but along with it, the company still catered to the needs and demands of society's best with a line of 12-cylinder cars. For 1938, the Packard senior cars shared bodies with the eight-cylinder cars. The Super Eight cars consisted of the 1603, 1604, and 1605. The 1603 had a 127-inch wheelbase a single body style, the Touring Sedan. The Model 1604 had a 134-inch wheelbase and seven body styles. The Model 1605 had a 139-inch platform with three factories and four custom body styles.

The Model 1605 factory bodies included a business sedan, business limousine, and a convertible sedan, with prices ranging from $3,150 to nearly $4,000. The Custom styles demanded a much higher price and new for 1938 were the addition of a Rollston Town Car and two Brunn customs including an all-weather cabriolet and a touring cabriolet.

The 1938 Super 8 had a pressurized radiator cap, pontoon fenders, electric clock, and cigar lighter. Buyers had the option of purchasing accessory packages that included the Custom Accessory Group or Deluxe Accessory Group.

James Ward Packard purchased a Winton automobile and had some complaints about it. He was subsequently challenged by Alexander Winton to build a better car. He accepted the challenge, and Packard's first automobile fired up on November 6th of 1899. A....[continue reading]

The Dietrich label was typically reserved for custom, full bodied, and special ordered cars from Packard. By this time, Packard was doing most of its coachwork in house. This beautiful Dietrich Convertible Sedan is both big and sleek. The coachwork i....[continue reading]

In 1938, the Packard Super 8 Convertible Sedan sold for $3,970 and was one of the most expensive bodystyles in the Super 8 Packard line-up. It was a five-passenger car riding on a large 139-inch wheelbase and weighed 4,945 pounds. It was equipped w....[continue reading]

This 1938 Packard 1605 Convertible Sedan may have been originally purchased by silent movie star Zazu Pitts. The vehicle was restored in 1995 and has traveled over 20,000 miles on tours in the United States and Canada. ....[continue reading]

This 1938 Packard Super Eight has a Sedanca deVille body built by Barker. During the late 1930s and early 1940s, this Packard was driven from Toronto to Palm Beach, Florida by chauffeur, Walter Bibby. He would then collect his employers and the owner....[continue reading]

Packard produced 55,719 cars in 1938, very commendable since this was a recession year which occurred as part of the Great Depression. Of these, 2,478 were Super 8 models. Packard would go on to survive until 1958 when it ceased production. Several o....[continue reading]

The Model 1605 features a Dietrich-designed Packard body. 1938 was the final year for the Super 8, which is built on the large Senior chassis.....[continue reading]