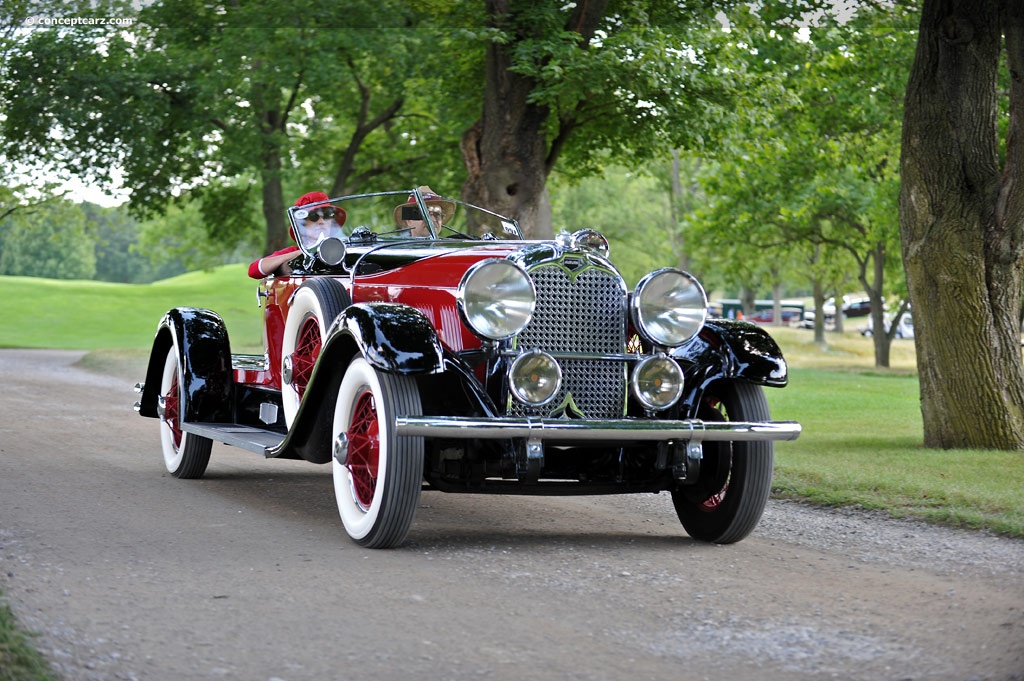 The Eckhart Carriage Company was founded in Auburn, Indiana, in 1874 by Charles Eckhart. Mr. Eckhart's sons, Morris and Frank, showed an interest in the automobile, and after a few experiments, they entered the automobile business. The Auburn Automobile Company was founded in 1900. The brothers quickly acquired local carmakers and moved into a larger plant by 1909. Two-cylinder models were followed by a four-cylinder model in 1909, and then a six by 1912. The company enjoyed some success but was forced to close during World War I due to material shortages. When peace team resumed, the company was sold in 1919 by the Eckhart brothers to a group of Chicago investors headed by Ralph Austin Bard, and included the chewing gum magnate William Wrigley, Jr. Although the business was revived, it was never profitable. The struggling company turned to an automobile salesman named Errett Lobban Cord for assistance. They offered him a position to run the company, but Cord countered with an offer to take over completely, which the Chicago group accepted. The buyout was completed before the close of 1925.

Cord worked aggressively to revitalize the company and make it successful. The vehicles were given advanced engineering, aggressive styling, and painted in bright, attractive colors. The strategy worked and the unsold inventory quickly found buyers. Several eight-cylinder engines were acquired from Lycoming, and for 1925 the Auburn 8-63 and 8-88 were introduced, with prices starting at $1,895. One of E.L. Cord's many successes was the development of the Auburn Speedster. Built in limited numbers, it was designed to attract new customers and draw them into the showroom. The bodywork, the work of Alan Leamy, featured a dramatic tapered rear end and angled doors. It was adapted from a Duesenberg show car bodied by McFarlan, and advertised as 'the biggest package in the world for the price.' Priced at a under $2,000, this remarkable automobile offered a top speed of 100 mph, making it one of the true American sports car of its era.

For 1929, Auburn sales had risen dramatically to over 23,000 units. This sales success must be attributed to the vehicles performance and attractive styling. Several new speed records were established from coast-to-coast by Wade Morton and Eddie Miller. Auburn Eight's were raced with much success in both Europe and North America. The price was also another feature, with a comparable Stutz costing nearly $5,000 compared to the Auburn Eight for just over $2,000.

Auburn offered several engine options in 1929, including the 120 - sometimes called the 'Big Eight', named for the horsepower rating of its 268 cubic-inch inline eight-cylinder engine. Several different body styles were offered, all drawn by Alan Leamy with inspiration from the creations of California coachbuilder Murphy. The designs featured a subtle beltline with molding flowing into the hood line, often accented by two-tone color schemes. Mechanical features were similarly attractive, with four-wheel Lockheed hydraulic brakes, a Bijur centralized chassis lubrication system, and hydraulic shock absorbers.

In 1928 Auburn introduced two Lycoming-powered eight-cylinder engines, one rated at 88 horsepower and the other at 115 horsepower. These became the bases for the 8-88 Model and the 8-115 Model their designation obviously in reference to the engine. These new models were given hydraulic drum brakes to aid in stopping power and to help keep the Speedsters in the drivers control. The styling....
Continue Reading >>

Auburn was produced in the city of Auburn, Indiana from 1900 through 1936. In 1924 they approached Errett Lobban Cord, a highly successful automobile salesman, with an offer to run the company. Cord countered with an offer to take over completely in ....[continue reading]

This 1929 Auburn 8-120 Convertible Sedan wears an older, yet high-quality, body-off restoration and has accumulate a mere 250 miles since. It is painted in a two-tone exterior color finished in Cat's Eye Green and cream and fitted with a tan convert....[continue reading]

This Auburn 8-120 Boat Tail Speedster was discovered in a 1950s junkyard with a crab apple tree growing out of the cowl and a goat tied to the bumper. After much time and dedication, the car has been restored to its original glory. These were elegant....[continue reading]

The first generation Auburn Speedster was built in 1928 and 1929 as a low-volume promotional model. With their daringly raked vee'd windshields, hood louvers, and door openings angled to match, they gave the impression of speed even while standing st....[continue reading]

The Auburn 120 'boat-tail' Speedster was adapted from the Duesenberg show car, with body by McFarlan. It is a true performance icon that was advertised as 'the biggest package in the world for price.' The original price was just under $1,000 at a tim....[continue reading] 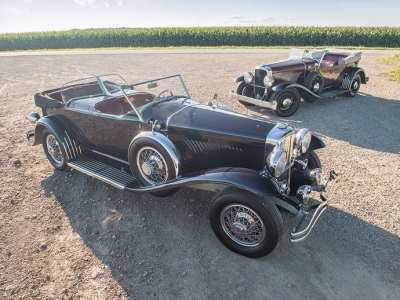