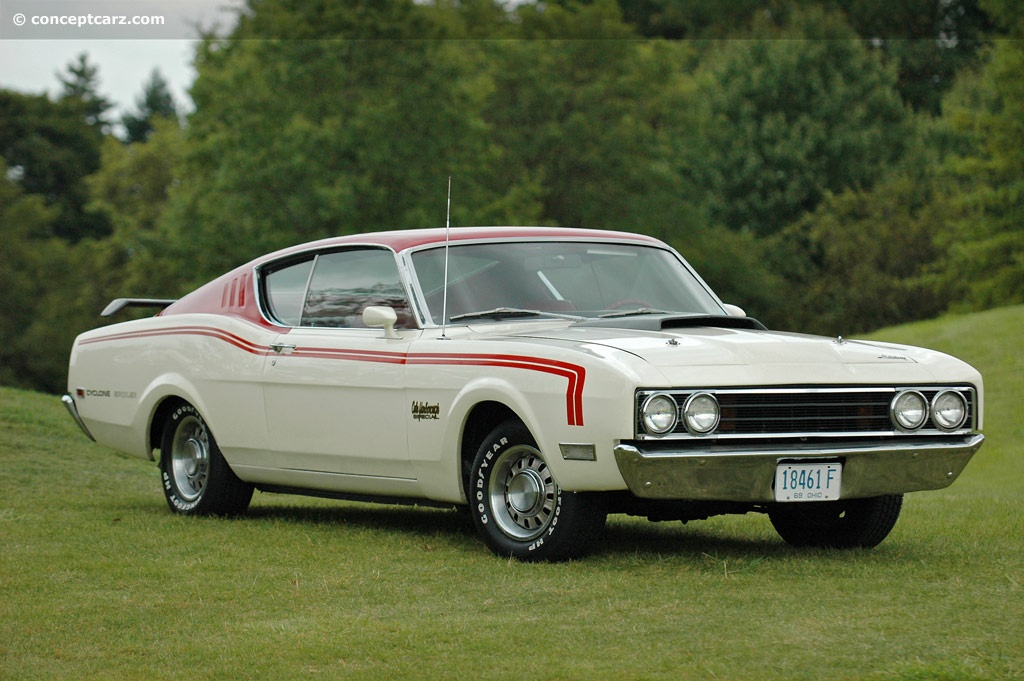 Although Mercury was considered more of a luxury brand than its Ford corporate cousin, it often catered to the high-performance market segment and participated in racing activities during the late 1960s. The Cyclone burst onto the scene in 1964 with advertisements that stated 'under the hood, a whiplash of surging power' and the 'masculine feel of black vinyl in the instrument panel.' Originally an option on the 1964 Mercury Comet, it came equipped with a 289 CID V8 rated at 210 horsepower. The following year it gained a four-barrel carbureted version of the 289 CID, although it was rated at 200 horsepower. Additional performance options were available including a handling package, and a 'power transfer' rear axle.

A major styling change occurred in 1966 and its body was now based on the Ford Fairlane. New engines became available including the 390 Y code with two-barrel carburetion and 265 horsepower. The 390 H code had a four-barrel carburetor and 10 additional horsepower. When the GT option was selected, it added a 390 S code engine with 335 hp, stripes, a fiberglass hood with two air scoops, and other performance features designed to cope with the increase in power.

The third generation of the Cyclone was built in 1968 and 1969, no longer having 'Comet' in its name. The 1968 Cyclone was available as a fastback Coupe or Hardtop Coupe, but for the following year, only the fastback body style remained. Priced at $2,750 a total of 5,882 examples were sold plus 3,261 of the Cyclone CJ.

To homologate cars for NASCAR, rules stated that 500 street versions were required to be built. The Mercury Cyclone and Ford Torino fastback bodies had proven very effective on shorter tracks, however, the large, squared-off frontal areas and recessed grille provided major drag that prevented them from reaching their full potential on longer speedways. To resolve this issue, the Torino Talladega and the Cyclone Spoiler were developed, with two Cyclone variants available: the Spoiler, with a standard nose, and the radical Spoiler II, with an elongated nose similar to that of the Talladega.

Mercury brought racing and street performance together with the Cyclone Spoiler that was named for two of its NASCAR drivers, Cale Yarborough and Dan Gurney. A two-tone Spoiler package was added to the Cyclone and offered either as a Cale Yarborough Special in the Wood Brothers colors of white and red, or a Dan Gurney Special with Gurney's Presidential Blue on white. The base package included the 290 HP 351, FMX automatic transmission, a blacked-out grille, a two-tone roof and rear deck with matching hockey-stick side stripes, a hood scoop and lock pins, argent-styled steel wheels with F70x14 raised-white-letter Goodyear tires and a rear deck spoiler. Options for the spoiler model included everything available for the standard Cyclone, including bucket seats, air conditioning, and optional big-block engines.

It is estimated that 503 examples of the Spoiler were produced, with as many as 519. Of those, about 40 percent were the Dan Gurney-edition cars.
by Daniel Vaughan | Aug 2020

Advertised as the vehicle that was Born for Action - Racy the 1965 Comet Cyclone hit the market with a bang. Help stamp out dull driving was the catchphrase used to promote this new model. Beginning as an option for the 64 Comet, the Mercury Cyclone was originally introduced to the automobile market in 1964. For the next three years, it continued as a Mercury Comet Cyclone. Remaining in production....
Continue Reading >>

The Mercury Cyclone Spoiler II was a special model produced to satisfy the booming performance car market of the 1960's. It was more aerodynamic than the fastback coupe and was designed to specifically meet NASCAR's certification requirement and com....[continue reading]

In 1968 the Mercury Cyclone was offered in a fastback and a notchback hardtop, though only the fastback body style returned for its final year of 1969. The GT option was reduced to just an appearance group package. However, the new 'hot' Cyclone wa....[continue reading]

This 1969 Mercury Cyclone was built by Homan and Moody for Bobby Allison to race in the 1971 NASCAR Winston Cup season. The 1969 car was chosen because of the superior aerodynamics to the 1971 model. It features the 427 tunnel port Ford engine produc....[continue reading]

David Pearson won the 1968 NASCAR Championship and for the following season, Ford Motor Company engineers paid extra attention to aerodynamics. Focusing on speed and stability, the Ford Motor Company made some of the most famous and memorable stock c....[continue reading]

This 1969 Mercury Cyclone is powered by a 428 Cobra Jet Ram Air engine with the Drag Package. Only 14 Cyclone's were ordered with automatic transmissions and only 260 were powered by the 428 Cobra Jet. Only one was painted white.....[continue reading]

Stock car racing and the muscle car era was becoming very popular during the mid-1960's which left many marques abandoning the larger platforms in exchange for intermediate bodied cars. For Mercury, their answer was the Comet which had debuted in 19....[continue reading]

The NASCAR Aero Wars were in full force in 1969, and Mercury was right in the middle of all the action. Realizing that pure horsepower would not necessarily put them in the winner's circle, like Ford, they created a very special automobile, called th....[continue reading]

The Mercury Cyclone Spoiler II is what legends are made of. With numerous unique features specifically designed to create a faster automobile for NASCAR racing, the boys from Mercury were certainly successful.....[continue reading]