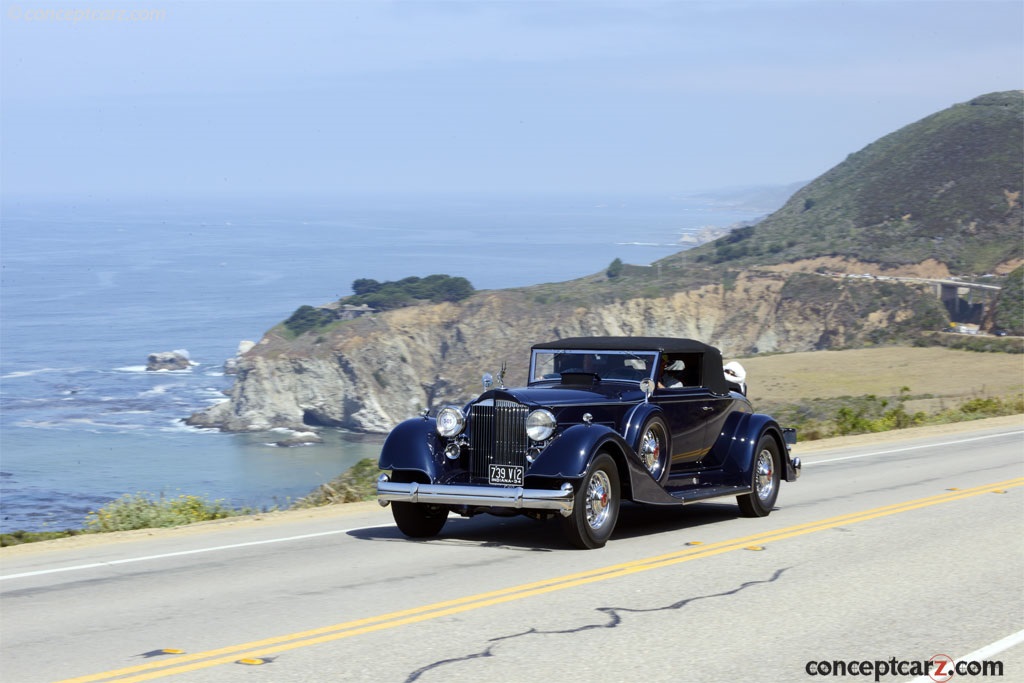 The Packard Twelve was the company's top-of-the-line automobile and many people believe the signature car of the Classic Era. It was a conservative automobile with elegant appointments and a refined chassis powered by a quiet 12-cylinder powerplant.

During this era the cylinder war was in full swing, as was the Great Depression. However, the development of Packard's Twelve began years prior, dating back to the Cord L-29 and the Miller-engines front drive race cars. Packard's management entertained the idea of the front drive vehicle and commissioned the construction of a prototype. A 12-cylinder engine was also created for this new car, as the shorter length of a V-12, compared with Packard's inline eight, allowed more flexibility in packaging the front-drive chassis.

After testing revealed weakness with the front-drive chassis design, and development costs skyrocketed, Packard decided to abandon the project. Meanwhile, Cadillac had introduced their mighty 16- and 12-cylinder models, igniting a frenzy that would ripple throughout the automotive industry. Packard's response was to install their new 12-cylinder engine into Packard's proven Deluxe Eight chassis. When introduced, Packard dubbed their new creation the Twin Six, in honor of Packard's first V-12 which had been introduced 15 years earlier. By 1933, the name had been changed to the Packard Twelve. 1933 was also the last year for Packards to have flowing fenders and classic lines before switching to the streamlined look. In the front was a vee-shaped radiator with matching headlights and fender lights. Inside, the instrument panel was just as impressive, resembling a jeweler's displace case full of finely polished instruments and gauges.
by Daniel Vaughan | Aug 2019

Packard was considered by many to be the king of the luxury Phaeton market and this 1934 example makes it easy to understand why. Only 960 buyers stepped forward to buy V12 cars from Packard in 1934 and precious few of those bought Phaetons, making ....[continue reading]

The Eleventh Series Packard is considered by many to be the ultimate Packard Twelve. It was the last to feature the classic swept fender lines as future models would use the streamlined look. In the front there was a vee shaped radiator and matchin....[continue reading]

Raymond Dietrich was one of the most respected and influential designers of the classic era. He worked at Brewster and LeBaron before he formed Dietrich, Inc. Soon, Packard became one of Dietrich's best customers and by 1933, all open Packards carrie....[continue reading]

The Club Sedan style was a Packard favorite that somehow managed to convey both a slightly more formal yet at the same time moderately sportier look than their conventional sedans. This 1934 V12 example is one of their most expertly balanced designs....[continue reading]

The Packard Twin Six was renamed in 1933 to the 11th Series Packard Twelve. These were very elegant and impressive cars with elegant lines, a refined chassis, and a powerful engine.....[continue reading]

This 1934 Packard Twelve 5-Passenger Phaeton is an original Earl C. Anthony California car and may have been delivered new to Columbia Pictures before coming into the ownership of the H.J. Heinz Company. Later, the car was purchased by Mr. George Pre....[continue reading]

This 1934 Packard Convertible Victoria is fitted with a custom body built by Ray Dietrich on a 142-inch wheelbase chassis. It has been treated to a full, professional restoration and has previously won a First in Class award at Pebble Beach.....[continue reading]

This five-passenger Packard Twelve Victoria Coupe has been treated to a professional restoration to concours level quality. The work was completed in the mid-1990s.....[continue reading]

This seven-passenger Packard 1107 Touring car was sold by the Packard Motor Car Company of New York on March 30th of 1934. It is believed to be the 11th example of approximately 200 produced, and was originally purchased by the City of New York and r....[continue reading]

Packard, a prestige car manufacturer, found itself in the middle of the worst economic depression to ever hit America. Coming off its first profitable year post-Depression in 1933, Packard pulled out all the stops for 1934 in a total overkill of new ....[continue reading]

LeBaron received its first major order from a United States manufacturer in 1924. That order was from Lincoln thus beginning a lifelong friendship between Edsel Ford and Ray Dietrich. Though Ford was able to persuade Dietrich to come to Detroit, Diet....[continue reading]

This car has had a series of owners in the Midwest and west. It was restored in Indiana and is known as The Whitehouse Formal Sedan 1107.....[continue reading]

The 1934 Packard line took styling cues from the Ray Dietrich designs used in 1929 and 1930 on individual custom cars. This coupe roadster was powered by Packard's 445 cubic-inch V12 and was equipped with vacuum assisted brakes, Bijur automatic chass....[continue reading]

The Convertible Sedan bodystyles with the fully retractable division window was a chauffeur-driven formal car that could be transformed into a sporty owner-driven open car when the top was lowered. This particular example is finished with a cream-col....[continue reading]

The Packard Twin Six was renamed in 1933 to become the Eleventh Series Packard Twelve. These are elegant and impressive cars with beautiful lines, a refined chassis, and a powerful engine. The year 1934 is considered by many to be Packard's best year....[continue reading]

The early history of this Packard 1107 Convertible Coupe Roadster is not fully known, but in late 1994 or early 1995 it was purchased from Mr. Joe Morgan by collector David E. Kane of New Jersey. At the time the odometer is believed to have shown 35,....[continue reading]

Packard, a prestige car manufacturer, found itself in the middle of the worst economic depression to ever hit America. Coming off its first profitable year post-Depression in 1933, Packard pulled out all the stops for 1934 in a total overkill of new ....[continue reading]

This vehicle is a Five-Passenger Coupe that was originally owned by Tom Pendergast. It was sold new in Kansas City by the Reid-Ward Motor Company. It is finished in Packard Blue with a blue cloth interior. It is a former Classic car Club of America F....[continue reading]

Entering the 1930s, Packard hoped to beat the stock market crash and subsequent Great Depression by manufacturing considerably more prestigious and expensive automobiles than it had prior to October 1929. As an independent automaker, Packard did not ....[continue reading]

The Eleventh Series Packard Twelve was the last Packard to feature the classic swept fender lines. It also has the classic Vee-shaped radiator and matching headlights and fender lights. The interior is equally elegant, with walnut trim and many luxur....[continue reading]

Approximately ten examples of the five-passenger phaetons were built on the Eleventh Series Twelve chassis. This particular example was the second on built. It was sold new by Packard of Chicago on February 28th of 1934. Its first owner was Albert Ha....[continue reading]

The 11th Series Packard Twelve is considered to be one of the finest automobiles produced by Packard and one of the most significant creations of the classic car era. It is powered by a 445 cubic-inch, side-valve V12 engine that was originally design....[continue reading]

A well-known Packard salesman slogan suggested when it comes to the marque, you should 'Ask a man who owns one.' During the 1920s and early 1930s, the three 'P's - Packard, Pierce-Arrow and Peerless - were considered the most luxurious cars in produc....[continue reading]

The 1934 model-year Packards were introduced in August of 1933, and more than 55 different model configurations were available across three engine ranges: the Eight, the Super Eight, and the Twelve.....[continue reading]