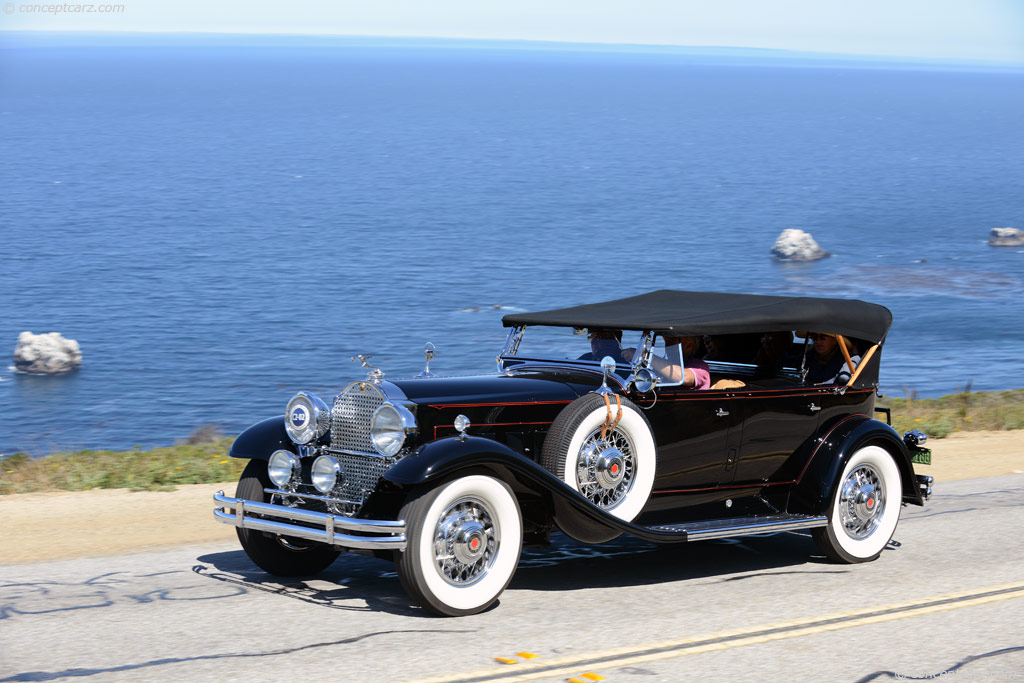 Raymond Dietrich was the individual responsible for designing some of the great Packard masterpieces. He began working for the Packard Automobile Company in 1925 under the direction of Alvan Macauley, the president of the company at that time.

Dietrich had attended Mechanics Institue for four years developing his skills in areas such as drafting, illustrating, body surface development, and airbrushing techniques. He had also spent time at the American Banknote Company doing work as a line sketch artist. This, coupled with natural skill, creativity, and ambition were the ingredients needed to bring about the great artistic creations that help secure Packards fame in history.

Alvan Macauley commisioned Dietrich to help produce an in-house line of custom bodies, rather than having independent coachbuilders perform the work else where. This created a profitible and exclusive line of Packards, while still maintaining a reasonable price. This did not eliminate the custom coachwork done by builders such as LeBaron, Rollston, Murphy, Fleetwood, Judkins, and Holbrook; rather, it introduced a marketing strategy that was brilliant and very successful.

This 1931 Packard Eighth Series was one of the last designs Dietrich did for the Packard company. Due to reogranization and management changes, Dietrich resigned in September of 1930.

The Packard DeLuxe Eight Model 840 and 845 were built atop the long 140- or 145-inch wheelbase and are considered by many to be the ultimate Packard of their era. The long bodies provided ample space and luxury for their passengers. The coach-built P....[continue reading]

1931 was a short year for Packard that officially came to an end on June 17th of 1931. There were only subtle changes to distinguish the 1930 Seventh-Series cars from the 1931 Eighth-Series cars. The hubcaps grew in size; the steering wheels had th....[continue reading]

Dietrich and Company began building bodies for Packard in the mid-1920s, and by 1931 catalogs offered a series of custom bodies for Packard's larger chassis. Economic conditions resulted in very few sales. This Convertible Victoria is one of those ....[continue reading]

This 1931 Packard 840 DeLuxe Eight Convertible Victoria has coachwork by Waterhouse and is a former Pebble Beach Concours d'Elegance Class Winner. It is black with a burgundy leather interior and a black cloth top. The engine is a 385 cubic-inch L-he....[continue reading]

The Packard Company built a tradition and reputation for style, durability, quality, and reliability. The eight-cylinder engine was very refined for the 1930 era. It was smooth, quiet and capable of carrying the vehicles at a respectable pace. The ow....[continue reading]

The DeLuxe Eight Sport Phaeton chassis sold for $3,490 when new. It proved to be too expensive for all but a few select buyers. As a result, only a handful were ever built. This example is one of them; it is a left hand drive example that was restore....[continue reading]

The Packard Eighth Series was introduced in 1930 with the Standard Eight engine displacing 319.2 cubic-inches and producing 100 horsepower. The Deluxe Models had a 384.8 cubic-inch engine and 120 horsepower. During that year more than 6000 Deluxe Eig....[continue reading]

This is a one of a kind Town Car built on a 1931 Packard 840 chassis, originally built for Mme. Emily Burroughs of Paris, France. The car features a deluxe straight eight engine, 385 cubic inches. The body has a roll-up window between the passenger s....[continue reading]

The Packard Speedster, built in 1929 and 1930 (only), was patterned after a boat-tailed roadster built in 1928 by chief engineer Jesse Vincent. The Packard Deluxe Eight had the shorter and lighter Standard Eight chassis with the more powerful Custom ....[continue reading]

For 1931, Packard built just 626 examples of the Super Eight. This Sport Phaeton is one of those examples, produced during the abbreviated 1931 production run and benefits from the 1932 upgrade kit. (Packard offered to dealers to upgrade unsold 193....[continue reading]

The year 1931 was the last year for the famous flat-front Packard radiator, which was the company's durable trademark. This handsome example is powered by Packard's famous 385 cubic-inch straight-eight engine coupled to a four-speed transmission; it ....[continue reading]

On August 14th of 1930, Packard introduced their Eighth series and gave them the designation, the 826, 833, 840 and 845, with large hubcaps, three-spoke steering wheel and deeper sweeping fenders with plain bumper clamps. ....[continue reading]

This is a 1931 Packard 840 Deluxe Roadster and only 154 of these were produced. It was the last year Packard offered Roadsters as sales were off because of the depression and the public preferred convertibles at this time. They had roll-up windows.

From 1899 until 1958, the Packard Motor Car Company produced some of the most highly-regarded luxury automobiles in the world. Production of the Eighth Series began in August 1930. The 840 was one of four new models, which received larger hubcaps, a ....[continue reading]

More than 6,000 Deluxe Eights were produced in the 1930 model year, and only 2,016 were built for 1931. This Deluxe Eight Convertible Coupe was delivered new to Earle C. Anthony distributorship in Los Angeles, and is believed to have spent most of it....[continue reading]

For 1931 Packard produced two series of cars, their models 826 and 833 called the Packard Standard Eight, and the models 840 and 845 called the Packard DeLuxe Eight. Their series descriptions explained that the cars were Packard's 8th series straight....[continue reading]

The Packard Model 840 and Model 845 Deluxe Eights rested on a long, 140-inch wheelbase which provided an outstanding platform for the custom coachbuilders of the era. This example is a Dual Cowl Sport Phaeton that has a known history documented by a ....[continue reading]

The Packard 840 and 845 are considered some of the finest models of the early 1930s. Their longer wheelbase allowed custom coachbuilders to create striking designs, and for 1931 Packard model the cowl forward to make room for even more spacious and l....[continue reading]

Packard introduced their Eighth Series in 1931. In comparison to its predecessor the Eight's motor offered 120 horsepower in Deluxe trim, up from its initial 85 BHP. Thanks to the gradual year-over-year changes, the styling was even more modern and r....[continue reading]

During the 1930s, the Great Depression had a firm grip on America and its automobile industry. Packard remained at the top of the luxury market but its future, like that of its competitors, was tenuous. ....[continue reading]

By the end of 1931, Packard dealers offered the new '9th Series' and encouraged dealers to upgrade any remaining 1931 models in their inventory to 1932 trim. This would include the 1932 radiator with the distinctive V shaped grille and stone guard, t....[continue reading]

In 1931, most American car manufacturers were feeling the effects of the Great Depression, and Packard was no exception. Packard's plan for survival was to concentrate solely on its top-of-the-range lineup, the 826 and 833 Standard Eight and the more....[continue reading]