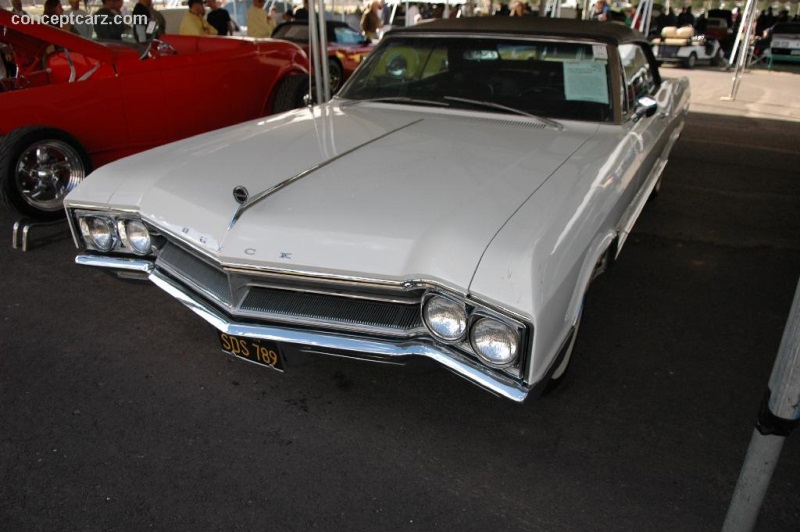 The Buick Wildcat was a trio of concept cars built in the early-and-mid-1950s showcasing several advanced engineering and design ideas including fiberglass bodywork, low-slung designs, racked-back wraparound windscreen, concave grilles, 'buffer bombs' integrated into a massive wrap-around front bumper, and 'Roto Static front hub caps that remained stationary while the wheels spun. In 1962, the name 'Wildcat' was applied to the Buick Invicta, combining its longer full-size two-door hardtop body with a high-performance 401 cubic-inch Nailhead V8 delivering 320 horsepower and 445 lb-ft of torque. It was given Electra 225-like taillights, a center console with a tachometer and transmission shifter, and bucket seats. The engine was mated to a Dynaflow transmission which it shared with all other full-sized Buicks. Additional amenities included a vinyl-covered roof, unique emblems, a stylized head of a wild cat, located on each of the C-pillars, and special exterior side trim. In 1963, the Wildcat became its own series, separate from the Invicta subseries. Distinguishable features included a large aluminum trim panel that traversed the bodyside. A convertible and four-door hardtop sedan joined the original two-door hardtop coupe. The four-door version had a standard bench seat while the other body styles featured bucket seats and console interior.
The 1964 models were devoid of the traditional horizontal VenitPorts found on other Buicks, replaced by vertically situated chrome hash-marks on the lower front quarter panel immediately behind the front wheel housings. A pillared four-door sedan joined the lineup along with two trim levels of 'standard' and 'custom.' A three-speed manual transmission with column shift became standard and the three-speed automatic Super Turbine 400 was optional. A four-speed manual was optional from 1963 through 1965.
A one-year-only mid-line deluxe subseries was added in 1965. The sole trim options on the 1966 to 1969 Wildcat include the 'base' and 'custom.' The 'base' trim level was similar to the Wildcat 'deluxe' of 1965. The 'Gran Sport Performance Group' was a one-year-only package that could be ordered by selecting the 'A8/Y48' option. The standard engine through 1966 remained the 401 CID Wildcat V8 with 325 horsepower at 4,600 RPM. It had a cast-iron block, overhead valves, hydraulic valve lifters, a Carter four-barrel carburetor, five main bearings, and 325 horsepower at 4,600 RPM. A larger, 425 cubic-inch version of the Wildcat V8 was available from 1964 to 1966, delivering either 340 horsepower with a factory four-barrel carburetor or 360 horsepower when equipped with the two four-barrel carburetors ('dual quads') and finned cast aluminum valve covers with the Buick logo embossed on the top. Initially, the 360 horsepower engine was a dealer-installed upgrade with the car-intake modification bolted to stock MT-coded engines. Eventually, these 'Super Wildcats' could be ordered directly from the factory with MZ-coded engines. The base and GS packages received dual exhaust, posi-traction, heavy-duty suspension, chrome-plated air cleaner, cast aluminum rocker arm covers, and rear quarter-panel 'GS' badging on all post-1965 Gran Sports. The Wildcat GS option was exclusive with just 1,244 examples built during the model year including 242 convertibles. Of those, a mere 22 examples were Super Wildcats. The Wildcat GS was able to sprint from zero-to-sixty mph in 7.5 seconds and had a top speed of 125 mph.The 1966 Buick Wildcat wore a unique grille with a vertical texturing feature and flanked on either side by dual round headlights. Behind the front wheelhouses were simulated air intake grids. The Wildcat nameplate was placed across the rear quarter panels and on the deck lid. The early 1966 Wildcat models had 'Wildcat' in script writing on the rear quarter panels, while examples built later in the year had individual block letters. The standard amenities were similar to the LeSabre, including door-operated courtesy lamps, dual horns, dual armrests, carpeting, Step_on parking brakes, front and rear seatbelts, and glovebox light. The Wildcat Custom added a padded-type armrest, Deluxe steering wheel, Custom headlining on all body styles except the convertible, and an outside rearview mirror. A more luxurious cloth and vinyl or all-vinyl trim were used, with either notchback or Strato buck front seats. When the Strato bucket seat option was selected, the passenger seat could recline.
Body styles on the 'base' Wildcat included a sedan priced at $3,230, a convertible at $3,480, a hardtop coupe at $3,330, and a hardtop sedan at $3,400. The most popular was the hardtop sedan with 15,081 examples built followed by 14,389 of the sedan, 9,774 of the hardtop coupe, and 2,690 of the convertible.
The Wildcat Custom trim was offered as a hardtop sedan priced at $3,600, a hardtop coupe at $3,550, and the convertible at $3,700. The most popular was once again the hardtop sedan with 13,060 examples built, followed by 10,800 of the hardtop coupe and 2,790 of the convertible. In 1967, the Wildcat gained a new engine with a 430 cubic-inch displacement and developing 360 horsepower with the help of a four-barrel carburetor. It had larger valves for improved breathing than the prior 401 CID and 425 CID Nailhead units, and a 10.25:1 compression ratio. This engine's production lifespan was relatively short, lasting through the 1969 model year. It was replaced in 1970 with a 455 CID V8, the largest V8 engine ever built by Buick. It was essentially a larger version of the 430 CID with the same large-valve design and developing 370 horsepower and over 500 lb-ft of torque. 1970 was the final year of Wildcat prodution, and for 1971 it was replaced by the Buick Centurion.
By Daniel Vaughan | Mar 2021

The Buick Wildcat began life in 1962 as an option of the Buick Invicta. From 1963 through 1970 the Buick Wildcat was its own series. In 1962 the Wildcat featured buck seats and a center console enclosing a tachometer and transmission shifter. Under the hood was a powerful 401 cubic-inch V8 Nailhead engine that produced 325 horsepower and 445 foot-pounds of torque. The exterior featured its....
Continue Reading >>

Buick developed a prototype vehicle called the Wildcat in 1953. This model came with a 322 cubic inch V8 engine that was rated at 188 horsepower. For its time, this vehicle was considered to be revolutionary. The body was fiberglass, and the front wheel hubs remained stationary as the wheels spun.Considered to be Buicks first performance vehicle, the Buick Wildcat, officially named the Wildcat....
Continue Reading >>

With a name that was inspired by a trio of 1950s concept vehicles, the Buick Wildcat LeSabre was fitted with the Wildcat engine that Buick had been producing since the early 1960s. This engine came in several varieties, the most popular being the Wildcat 445, which was a 401 CID engine that put out 445 ft-lbs. of torque. More of a luxury sports coupe than a performance vehicle, the Buick Wildcat....
Continue Reading >>
Concepts by Buick