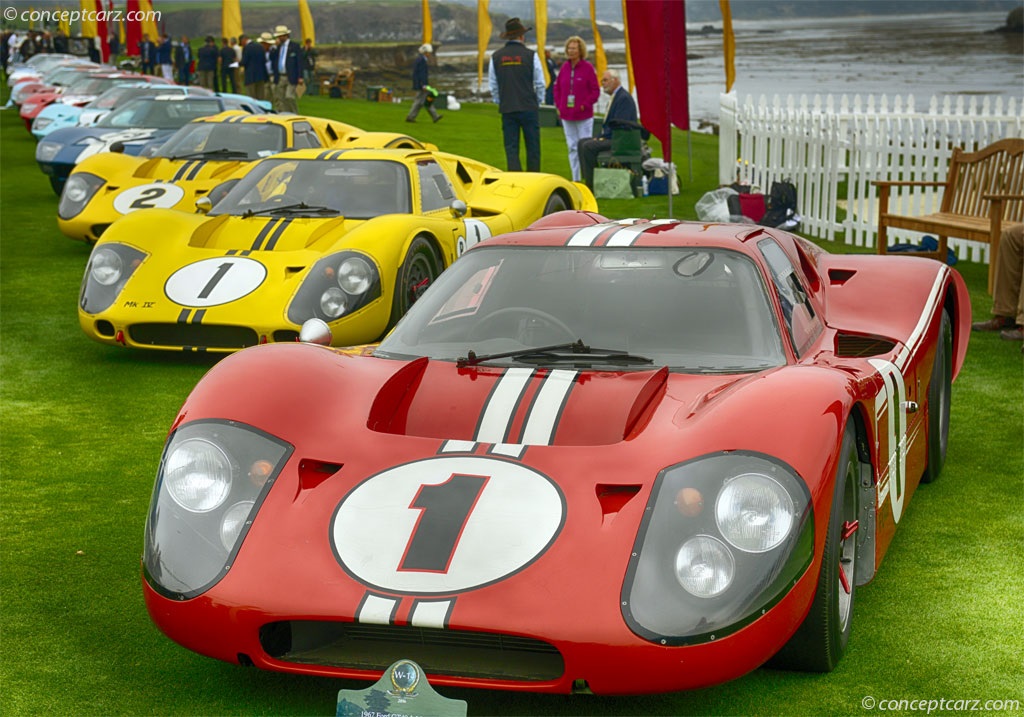 The history of the Ford GT40 began as an attempt to beat a certain Italian Automobile Manufacturer at the grueling 24 Hours of LeMans race. Each June, some of the world's best in the automotive industry descend onto a town West of Paris called LeMans, France to compete in a 24-Hour endurance competition. This tradition began in 1923 and since has become the pinnacle of automotive racing that challenges speed, performance and durability. A select group of European marques had since dominated the race such as Porsche, Ferrari, Jaguar, Bentley, and Alfa Romeo. Ford wanted to join this elite group.
During the early part of the 1960's, Ford attempted to buy Ferrari for $18 million to run its international racing program. The purpose was to use the Ferrari company and technology to help Ford achieve a LeMans victory. The negations unraveled and Ferrari walked away from bargaining table in May of 1963. Enzo Ferrari gave no indication as to why he had decided his company was no longer for sale. Ford decided to build their own super-car and beat Ferrari at International Racing.

Roy Lunn was an Englishman who had began his career at Ford of Britain and later came to the United States in 1958. He had played a role in helping to create the 1962 mid-engined Ford Mustang I Concept. The vehicle was an aluminum-bodied, two-seater that was powered by a 1.7-liter 4-cylinder engine.

After the Mustang I, Roy Lunn along with Ray Geddes and Donald Frey turned their attention to a racing program. The car that Ford had conceived was similar to a Lola GT, being low and mid-engined. The Lola was designed and built by Eric Broadley in Slough, England and first displayed in January of 1963 at the London Racing Car Show. Broadley was running low on funds and consequently more than eager to join with Ford.

Borrowed from the Lola GT was the monocoque center section and aerodynamic design. It was longer, wider, and stronger with a rigid steel section. In the mid-section lay an all-aluminum 4.2-liter V8 engine. The gearbox was a 4-speed Colotti unit; the suspension was double-wishbone. Excellent stopping power was provided by the 11.5 inch disc brakes on all four wheels. In April 1964 the GT40 was displayed to the public at the New York Auto Show. Two weeks later the car was at Le Mans being put through pre-race testing. The result of a very rushed program became evident. The car suffered from aerodynamic and stability issues and as a result ended in two crashes.

The Mark II, still built in England, was put through extensive testing which solved many of the stability issues. Carroll Shelby was brought onboard to oversee the racing program. He began by installing a 7-liter NASCAR engine that was more powerful and more reliable. The result was a vehicle that was much more stable and quicker than the Mark I. For the 1965 LeMans, the Mark II proved to be a stronger contender but resulted in another unsuccessful campaign.

The third generation of the GT-40, the Mark III, was introduced in 1966 and only seven were produced. Ford continued to fine-tune and prepare the GT-40 for LeMans. The GT40 led the race from the beginning. This lead continued throughout the evening and into the morning hours. During the morning the GT40's were ordered to reduce their speed for purposes of reliability. By noon, ten out of the thirteen Fords entered had been eliminated. The remaining three Fords went on to capture first through third place. This victory marked the beginning of a four-year domination of the race.

In 1967 Ford introduced the Mark IV to LeMans. It was built all-American, where the previous versions had been criticized as being English-built and fueled by monetary resources from America. This had not been the first attempt for an all-American team using an American vehicle to attempt to capture victory at LeMans. Stutz had finished second in 1928. Chrysler had finished third and fourth during the same year, 1928. In 1950 the first major attempt to win at Lemans was undertaken by a wealthy American named Briggs Cunningham. Using modified Cadillac's he captured 10th and 11th. His following attempts to win at LeMans included vehicles that he had built where he managed a third place finish in 1953 and fifth place in 1954. This had been the American legacy at LeMans.

Of the seven vehicles Ford entered in 1967, three crashed during the night time hours. When the checkered flag dropped it was a GT40 driven by Gurney/Foyt to beat out the 2nd and 3rd place Ferrari by only four laps.

For 1968 the FIA put a ceiling on engine displacement at 5 liters. Ford had proven that Ferrari could be beaten and an American team and car could win at LeMans. Ford left international sports racing and sold the cars to John Wyer. Gulf Oil Co. provided sponsorship during the 1968 LeMans season. The Ford GT40 Mark I once again visited LeMans and again in 1969 where they emerged victorious both times. In 1969 the margin of victory for the GT40 was just two seconds after the 24 Hours of racing.

In 1969 new FIA rules and regulations ultimately retired the GT40's from racing and ended the winning streak.

Around 126 Ford GT-40's were producing during the production life span. During this time a wide variety of engines were used to power the vehicle. The MKI used a 255 cubic-inch Indy 4-cam, a 289 and 302 small block. The 289 was by far the most popular, producing between 380 and 400 horsepower. When the MKI returned during the 1968 and 1969 season it was outfitted with a 351 cubic-inch Windsor engine. The MKII came equipped with a 427 cubic-inch NASCAR engine. The third generation, the MK-III, had 289 cubic-inch engines. The final version, the MK-IV all were given 427 cubic-inch power-plants.

America, more specifically Ford, had proven that American automobiles and drivers were able to compete in all arenas.

After the production of the Ford GT40 ceased, there were several companies interested in creating replicas. One such company was Safir Engineering which purchased the rights to the name. In 1985 the Ford GT40 MKV was introduced and examples would continued to be produced until 1999. Chassis numbers continued in sequence where the original Ford cars stopped. The cars were powered by a Ford 289 cubic-inch OHV engine that produced just over 300 horsepower and was able to carry the car to a top speed of 164. Zero-to-sixty took just 5.3 seconds. Disc brakes could be found on all four corners. The cars were nearly identical to the original.
By Daniel Vaughan | Jan 2007

In 1963, Ford was pushing hard to acquire Ferrari. However, when the deal failed to materialize a new kind of resolve overcame the Ford management and its racing department. The new attitude could be easily explained: 'If you can't buy them, then bea....[continue reading]

Rebuffed by Ferrari, ire burned with a great intensity and focus. The intention of the new GT40 program was clearly defined and had no time for distractions. However, Ford would quickly realize it could benefit from success on the track. They would b....[continue reading]

This is the first of the lightweight Mirages built to compete in the World Sportscar Championship. It is the only one to survive in Mirage configuration. It is more aerodynamic than its predecessors featuring slimmer, smoother bodywork. Most notable ....[continue reading]

A total of twelve GT40 MK-IVs were originally built. Of these, ten cars remain to date of which nine are privately owned and the Le Mans winning car is in the Ford Museum. The MK-IV made its debut in international competition in the 1967 Sebring 12-H....[continue reading]

Ford, not satisfied with the 1966 GT-40 MKII win at Lemans, set out to develop a new light weight chassis of honeycomb aluminum. Considered an experimental car, the new GT-40 was simply known as the 'J-car', referring to the Appendix J, or the regula....[continue reading]

In 1967 Ford proved that an American-made race car could beat the best. Four of these streamlined, highly sophisticated prototypes were entered at Le Mans that year, and one went on to an easy victory. After winning Le Mans in 1966 and 1967, Ford w....[continue reading]

Public debut of the Ford GT Mk IV program was announced by a news release that described the all-new Ford-Dearborn designed and built car (rather than Ford Advanced Vehicles in Slough, England, builder of all previous Ford GT cars) to campaign in wor....[continue reading]

This MK IV Racing Coupe is the car that caused much controversy among 1967 Le Mans race organizers. This would lead to the rules being rewritten in an attempt to 'outlaw' the cars. These were Ford's most advanced racing cars and entirely the product ....[continue reading]

The first J-Car, with a lightened chassis and fiberglass body, was completed in March of 1966, and it made its first public appearance at the LeMans Trials where it recorded the fastest time. The J-Car project was put on hold while development concen....[continue reading]

This GT40 MK III is the road-going prototype shown at the 1967 New York Auto Show. The car features the distinctive MK III front fender with four headlights and the longer alloy rear end that was bolted onto the standard MK I body. To add to its imag....[continue reading]

The Ford GT40 was the brainchild of John Wyer and Eric Broadley and built at the behest of Henry Ford II solely to beat Ferrari at the 24 Hours of LeMans. From 1966 to 1969, it won four consecutive victories at the French endurance race, sealing the ....[continue reading]

DAYTONA BEACH, Fla. (Jan. 26, 2017) – Murray Smith, longtime event promoter and collector and driver of historic race cars, was named the 2016 recipient of the RRDC Bob Akin Award. He was presented...