Suggested vehicles
Related news
It is believed that the legendary Karl Abarth constructed just five of these Abarth Scorpione SS vehicles. Two have been wrecked, one resides in the west coast another on the east coast (shown). The final example is believed to be in Belgium. The light green example shown was raced in Germany in the 70's and 80's and recently competed in the Pittsburgh Vintage Grand Prix, the Monterey Historics and Watkins Glen. Finished second in the Historic Race Group for the country in 2005.The car was built from 1968 until 1972 and was also marketed as the OTAS 820, as a Giannini, and as the Abarth Grand Prix and Scorpione. These rear-engined sports cars had Fiat 850 underpinnings and was developed by the Carrozzeria Francis Lombardi with an in-house design by Giuseppe Rinaldi. The cars made their debut in March of 1968 at the Geneva Motor Show. The prototype example was based on the front-wheel drive Autobianchi A112. The design was later adapted by Lombardi for the 850 sedan's floorpan. A targa version was shown at the Turin in1 969 and called the 'Monza.' At least two of those were built though it is not unknown if any were sold.
The design is eye-catching and even exotic, with its Kamm tail, pop-up headlights, and a sloping hood. The flip-up headlights were electrically powered and the bodywork was all steel, except the engine cover and rear panel. The windshield had a single wiper.
Powering the Scorpione SS is a Fiat 124 engine fitted with twin Weber carburetors. Horsepower is in the neighborhood of 100. There is a Fiat 850 gearbox, disc brakes and an independent coil-over suspension found in the front. 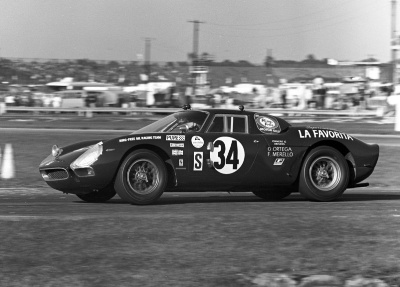 RM Auctions, in association with Sothebys, secures one of the worlds greatest Ferrari road racing cars for its exclusive Art of the Automobile auction, November 21 in New York City Considered one of the most original and highly prized of all Fe...