Sold for $33,000 at 2015 Gooding & Company - Arizona.
Sold for $28,600 at 2017 Gooding & Company : Amelia Island.
The Lotus Europa entered production in 1966 and was one of the first production cars to feature a mid-engine layout. They had a steel backbone chassis, a molded fiberglass body, and an all-wheel independent suspension with Chapman struts in the rear. Having low weight and a low drag coefficient, the Europa are regarded to having handling similar to that of Lotus' Formula 1 cars. In 1971, Lotus introduced the Type 74, which had a significant power boost by using a Ford block fitted with the Lotus designed twin-overhead cam head. Production of the Type 47 Lotus Europa Twin Cams reached approximately 4,700 examples. This particular example is fitted with the Big Valve version of the twin-cam motor, offering more power than the standard unit. It is an original and low-mile example that is finished in a maroon exterior with a black interior. It rides on magnesium wheels and displays the original plaque commemorating Lotus' five World Constructors' Championships.
By Daniel Vaughan | Feb 2015

Colin Chapman, Chairman of Lotus Cars Ltd, commisioned the famous, black & gold 'John Player Special', to celebrate winning the 1972 Formula One Constructors Championship.
The Lotus Europa was built from 1966 through 1975 and was one of the first vehicles to use a mid-engine rear-wheel drive layout. During its production lifespan, around 9,300 examples were produced. Ron Hickman, the directory of Lotus Engineering, produced drawings in 1963. The vehicle sat low and was designed as a replacement for the popular Lotus 7.The first series constructed was the Type 46 Series 1, also known as S1. The Type 47 was the competition sports car. Colin Chapman, the owner of Lotus Cars, designed the Europa around his 'minimalist' beliefs, meaning the vehicle was only given the materials that it needed and all efforts were made to reduce the overall weight of the vehicle. The vehicle was to be inexpensive performance machine. The chassis was constructed of steel while the body was fiberglass. The fiberglass body was bonded to the chassis meaning repair was difficult. The windows and seats were fixed and not adjustable. The steering and pedals were adjustable. An OHV 1470 cc four-cylinder Renault engine and gearbox were used to power the vehicle. The front brakes were discs while in the back were drums. In total, around 650 examples of the S1 were created.In April of 1968 the next installment, the Series 2, was introduced. Also known as the Type 54, or S2, it brought about luxurious and revised interior amenities such as adjustable seats, wood trim, and much-needed electric windows. The 1470 cc Renault engine was borrowed from the Type 46. In 1969, in an effort to export to the US market and to comply with United States federal regulations and standards, the Type 65, also known as S2 Federal, was created. The S2 Federal featured a Renault 1565 cc engine and modifications to the body for compliant with US D.O.T. standards.
In 1971 Lotus introduced the Type 74 Europa TC, meaning Twin-Cam. Outfitted with a 1558 cc twin-cam engine and a Renault five-speed manual gearbox, the vehicle was capable of producing just over 100 horsepower. The body was enlarged to provide extra interior room for passengers. In total, around 1580 examples were produced.
In 1973, Lotus introduced the Europa TC Special. It was given a Austin five-speed manual gearbox and a Lotus Big Valve engine that produced 126 horsepower. Zero-to-sixty took just seven seconds while top speed of the 740 kg machine was 123 mph. In total, 3,130 examples were produced.In 1975, production ceased.
By Daniel Vaughan | Oct 2012
Concepts by Lotus 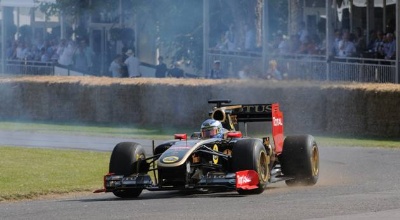 The peace and tranquillity of Lord Marchs estate will be shattered from 29th June to 1st July as Lotus takes centre stage at the 2012 Goodwood Festival of Speed, which celebrates Lotus innovation, engineering, heritage and style. Forty Lotus...
© 1998-2021. All rights reserved. The material may not be published, broadcast, rewritten, or redistributed.