It is the child of a new era. Its name: Concept A. A Volkswagen with all wheel drive, a cross between a sports car and SÚV, with a design that is as powerful as it is aesthetic and that posses best all round features. Volkswagen celebrates its world premier in Berlin. The premier for the public will follow at the Geneve Automobile Salon in late February. The Concept A stands for a progressive design-philosophy. Its front part with a new 3D crest radiator grill made out of brushed aluminum and distinguished head lights form a congenial yet competent and confident progressive appearance. The 'face' is well known, just not on an automobile, it looks like the mirror image of a cheetah. The silhouette shows the lines of a coupe. The front and rear doors open facing each other. The carriage overhangs are briskly short, the hood long, the C columns one of a kind. 20 inch alloy rims and 295 tires fill out the space in the distinctively extended wheelhouses. Full load and plenty of light: Concept A's finish is colored in the intense blue tone of glacier formations and is called „Glacier metallic'. Added are glass flakes which enhance the depth of the paint applied in a piano lacquer technique. The rear part, with its athletic flanks, imparts a strong elegance. The hatchback is built in tailgate-style and can be opened in two steps: the area under the rear lights swings out like a pick-up loading surface and thus creates a lot of room for big items. At the bottom the motor exhales via two round chrome pipes. The interior presents itself spacious and open. Light and air dominate the feel of the space. If needed, a large soft top can be swerved all the way back to the C column.
Motors any way you like, but with all wheel drive: The study shown in Berlin is powered by a 110 kW (150 hp) strong Twincharger (TSI), whose motto is 'maximum driving pleasure, minimum consumption'. Its power reaches the wheels via a six gear transmission and an all wheel drive 4MOTION. A turbo diesel direct fuel injection (TDI) with diesel particle filter, the FSI Turbo of the Golf GTI (147 kW / 200 hp) and much more could also be used. Studies can do and are allowed anything.Viable dream: The Concept A is the vision of an ideal Volkswagen. One of many variations of the future. They are all connected by one claim: Volkswagen, like the Concept A, has to be feasible for many customers and expand the model spectrum according to customer's needs.Present spectrum: Today this spectrum ranges from the Fox to the Phaeton. But more and more we will be seeing a fascinating diversity between these columns. CrossPolo, Golf GTI, Golf R32, Eos or the Passat Individual are showing the way. The New Beetle and the New Beetle Convertible were forerunners. The new spectrum between the columns offers a huge potential and includes cars like the clever Caddy Color Concept for families, the wild GX3 for California, the large Multivan Beach for the continental trip and the consistently versatile Eos for every day and every weather of the year.Future Spectrum: But that's not all. A VW sports car also fits between the columns. And an all wheel powered specialist of the Golf class has been on track to go into series for quite some time. As a concentrate of various automobiles, Concept A demonstrates where the optical journey can lead to. The crossover study combines elements of a compact SÚV with the lines of a sports car. A designer's coup de main.SÚV-Coupe: Presented worldwide for the first time in Berlin, the Concept A optically accompanies the leap of the Volkswagen brand into the future. Conceptually the design team used a point of attack coming from the ever growing de-fragmentation of the segments. Result: if up till now the SÚV's put the advantages of the steep hatchback in the forefront, the Concept A, with its coupe like rear part, underlines a more classic dynamic. Here the design combines the no compromise elegance of a sports car with the demonstrative robustness of an off road model. A fun machine and high everyday efficiency, a sports car with travel qualities, a coupe with station wagon features. The design of the 4.35 meter long, 1.85 meter wide and 1.55 meter high Concept A in detail:Concept A - Design Silhouette 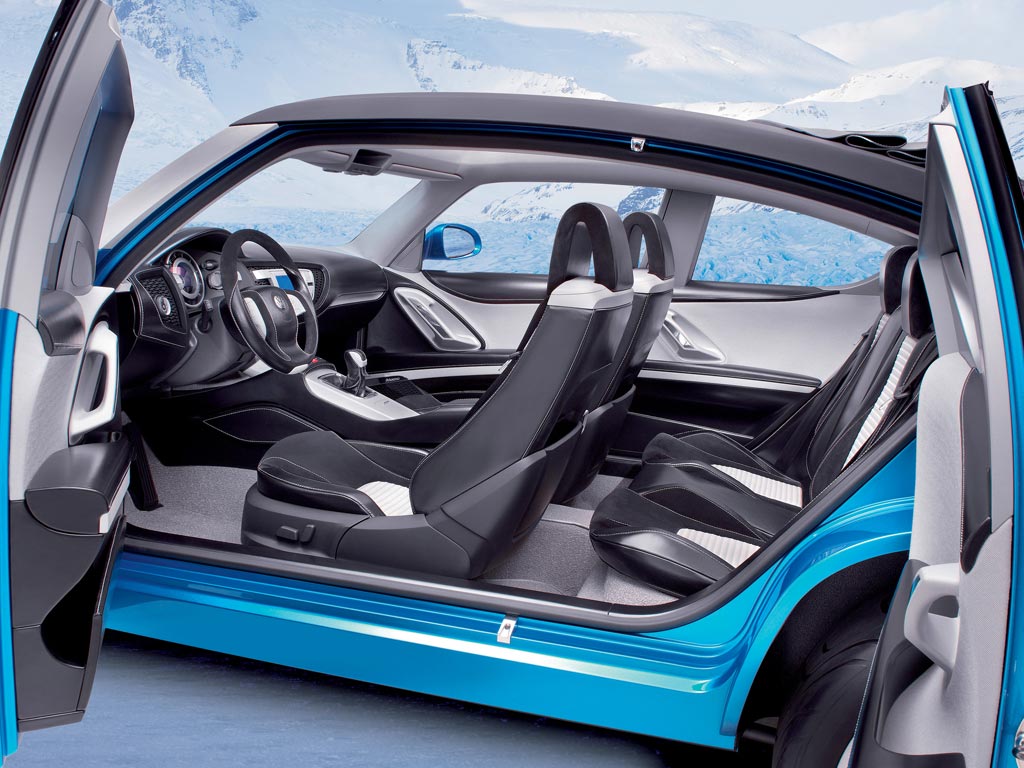 Imagine this car parked at the Gendarmenmarkt in Berlin. A pretty good pictureEvolution of pure dynamic: Here the VW language of the new era, recently continued with the Passat and Eos, finds another courageous step in evolution. Hereby the Concept A shows pure dynamic. Rising lines in the side graphic and the controlled interchange of surfaces and forms, but especially the sensational proportions reflect this dynamic and strength. Whoever moves around the car will always find new exciting modulations and accents; the design of the Concept A literally plays with the light.They are big, those wheels: The 20 inch wheels with their 295 tires distributed on a wheelbase of 2.6 meters give the impression of strength and power. The radial spoke motive of the rims optically additionally enhances the diameter. The spokes lying on top of each other in two parts continue the dominant theme of 3D and appear to be floating in the rim.Sharp proportions: The hood is extremely long, the back extremely short. Compact in any case are the carriage overhangs: In the front the axle is followed by 0.93 meter, in the rear its only 0.82 meter. The volume in between is distinguished by a prominent design element: The strong molding of the side skirts. Its concave transition to the surface is combined with a line at shoulder height. Sillboards, wheel arches and fenders melt to a muscular and excitement loaded form variety. Furthermore: What starts as a discrete line in the front part of the silhouette at the height of the A column, develops towards the rear to a continuously stronger modeled shoulder in the style of very classic and timeless sports cars. Formally described this shoulder line captures the light and gives the C column, which is harmonically combined with the chassis body, its very own graphic of a stretched triangle. Subjectively described, the incomparable C column shows speed and a crisp linkage in the perhaps sharpest and most dynamic rear part of any study ever presented by Volkswagen.Who needs a B column? A contrast to the almost sensuous form is the graphic strictness of the door groove. The doors face each other. The reason: the functional advantages of the generous entry and the spectacular picture of the open door wings. There is no room for a B column. Detailed haptical and formal perfection let the door handles of both wings optically appear as one. Its outer surfaces are held in brushed aluminum while the interior surfaces are marked by a polished upper. Because of their form and position the door handles of the Concept A suggest a two door coupe. This impression is enhanced by the roof contours. The flat and stretched black covered roof covers the very low windows of the sports car silhouette.Concept A - Design Front Part

Cheetahs are athletic, fast animals; the Concept A would be an athletic, fast automobile
Distinguished hissing: Already at first glance the new car communicates in a split second all optical messages over the front part of the automobile. In the front, the design of the Concept A shows a new evolutionary step Volkswagen's crest radiator grill. The V theme, known among others from the Golf GTI and Passat, incorporates the grill as an integral element in the sculpture. Clearly drawn out it eludes itself of the reservations of a homogenous surface and leaps forward with a balanced concentration of aggression. In the lower area however, the grill dodges behind a filigree body colored crossbeam. This picture resembles a wild cat, a Cheetah, fast, athletic, concentrated, not without desire to attack but also familiar.Look me in the eyes: The slightly slanted headlights, the eyes of this cat underline the exceptional competent and confident appearance of the Concept A. A trapeze shaped headlight element brakes the circle characteristic for Volkswagen ever since the Beetle age. LEDs catapult the traditional motive of the round headlights into the future. The frame for the grille and headlights are formed by the bumper elements on the side, which in the lower continuation, visually take the V theme of the entire front part to the top level. This V stretches from the under carriage protection, over the crest radiator grill and the hood with its power domes, all the way to the A columns.

Who says a Coupe can't be a pick up and a SÚV can't be a sports car? No one!Multi variable trunk situation: As outlined the hatchback of the Concept A is made of two parts. The lower part can be opened independently and just like a pick-up can stay open for the transport of long items. The top part: The outside lying hinges are not only a symbol for functionality and solidity they are also a technical requirement for the distinguished flow of the coupe like roof contour. The hatchback, with its large window and the flat angle, reiterates a classic sports car design element.One likes to drive behind that: In their graphic, the rear lights take up a, for this day and age, typical VW design element. The circle and the trapeze. New however is the again three dimensional design of the rear lights and that they are an integral part of the breathtaking shoulder of this study. At the bottom the motor exhales via two round chrome pipes. Concept A - Design Interior

Everything light and airy, no overloading of the instruments; on good days the folding roof turns the Concept A into a convertible
Spacious interior: Light and air dominate the space's feel. A large soft top can be swerved all the way back to the C column if needed. In its concept the interior is of a surprising clarity. The four bucket seats offer optimum ergonomic features, yet are still built in a space-saving manner. The cockpit and middle console are separate independent areas that were created solitaire, free of compromises of a forced connection.Source - Volkswagen Automotive Group

Carmaker to electrify vehicles in all segments up to 40 models in line-up as demand rises Think Blue. Factory. program ahead of schedule Los Angeles - The Volkswagen Group has outlined its global strategy for the launch of vehic...