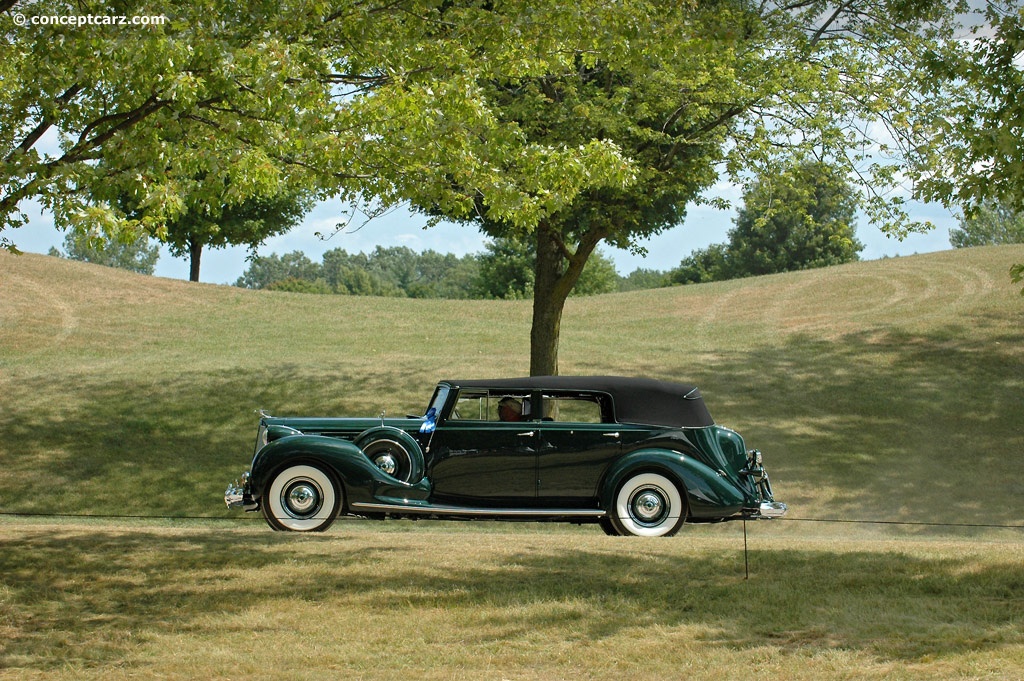 Packard introduced its Sixteenth Series Super Eight and Twelve models in September 1937. Most changes were cosmetic including more rounded fenders and veed windshields on many bodies. Packard sales totaled 48,682 units for 1938, less than 1937, but s....[continue reading]

The Packard Twelve was the company's top-of-the-line automobile and many people believe the signature car of the Classic Era. It was a conservative automobile with elegant appointments and a refined chassis powered by a quiet 12-cylinder powerplant. ....[continue reading]

Packard was the first automaker to manufacture a 12-cylinder car, and between 1915 and 1923 more than 35,000 of them rolled out of the factory. Packard then turned to straight-eights, but eight years later, when Cadillac announced that it would make ....[continue reading]

Packard's most expensive cataloged models were the two Brunn Cabriolets, both of which had base price tags of $8,510. The vehicles, though similar to the Dietrich-designed convertible sedan shell, used Brunn's own exclusive 4-door bodies, with all d....[continue reading]

In 1938, Packard offered the Twelve with 14 different body styles and constructed 566 in various configurations. ....[continue reading]

Coachbuilder Hermann Brunn designed for himself a long-wheelbase landaulet-type body with open chauffeur compartment in 1935. He called it cabriolet. Lincoln added the design to their catalog custom line for 1937 and was extended to Packard in 1938....[continue reading]

Brunn created a long-wheelbase landaulet-type body with an open chauffeur compartment, which he called a cabriolet, in 1935. Two years later, it was added to the Lincoln catalog custom line. The following year, in 1938, it became park of Packard's ....[continue reading]

This vehicle is a 1938 Packard Twelve Coupe Roadster Model 1608 that has been given a comprehensive restoration since new. The interior features tan leather and there are whitewall tires, dual side-mounted spares with proper Packard metal covers and....[continue reading]

This 1938 Packard Twelve Model 1608 Landaulet wears coachwork by Brunn. The 1938 Packard Twelves featured a new vee'd windshield, hood and grille with three adjustable cooling louvers along each side of the hood a new instrument panel. An industry ....[continue reading]

New York City coachbuilder Rollston was highly regarded for its formal town cars, which were designed to be driven by a liveried chauffeur who rode exposed to the elements, in the style of horse-drawn carriages. Their popularity led Packard to catalo....[continue reading]

There were 566 examples of the Packard Twelve produced for 1938 and just 25 were given the Dietrich-designed Convertible Sedan body style, selling for nearly $6,000 when new. This example is a Series 1608 powered by a 473.3 cubic-inch L-head V12 eng....[continue reading]

The Brunn-Derham Town Car body on this car was originally built by Brunn & Company on a 1929 Pierce-Arrow chassis. The original owner of that car liked the town car so much that in 1938 she had its beloved body transferred to a new chassis - this Pac....[continue reading]

This 1938 Packard Twelve 1608 Limousine was originally owned by actor Lionel Barrymore, who had the wheelchair conversion made by coachbuilder Bohman & Schwartz for $1,850.....[continue reading]

This Packard Twelve Model 1608 was sold new by California Packard dealer Earl C. Anthony Inc. in August of 1938. It is believed that this car was once part of the Harrah Collection before passing through several individuals and then finally joining a....[continue reading]

1 of 3 Built! In 1938 Brunn was awarded a contract to build a few Touring Cabriolets and All-Weather Cabriolets (Town Cars) for their twelve-cylinder Model 1608 and 1708 chassis (1938-39). Normally 95 per cent of series-built production bodies would ....[continue reading]

One of the premier coachbuilders of the American classic age, Derham created bodies for many clients, including heads of state. Derham-bodied cars furnished transportation in 15 coronations around the globe, and the company was the only coachbuilder ....[continue reading]

In 1938 Brunn was awarded the contract to build the Touring Cabriolets and the All-Weather Cabriolets for Packard's 12-cylinder Model 1608 chassis. Packard shipped the rolling chassis to Buffalo with a soapbox driver's seat in place and gave Brunn $1....[continue reading]

A new V-12 Packard model was introduced in 1932, powered by a 67-degree V-block displacing 445 cubic-inches. Named the Twin Six, its name was changed the following year to simply Packard Twelve. Two years later, the engine displacement rose to 473.3 ....[continue reading]