Coupe
Designer: Pininfarina
Chassis #: 2821 GT
Engine #: 2821
Sold for $2,365,000 at 2014 Gooding & Company - The Scottsdale Auction.
This Ferrari 250 GT Coupe Speciale is one of a very few special-bodied 250 GTs built during the initial run of the 250 GTs and GTOs. Built on the short-wheelbase chassis with the Lampredi-designed 3-liter V12 engine, the design combines a sporty 250 GT front-end with the more rounded rear of the luxurious 400 Superamerica. Five different Speciales were produced, including the 250 GTO prototype with rather similar lines. This car is one of the last pair of Speciales to be built and shown by Ferrari at the 1961 London Motor Show.The history of this 250 GT begins in June of 1961, when Ferrari sent 2821 GT - a 508E chassis - to the Pinin Farina factory in Torino. It was equipped with all the latest advances introduced for the 250 GT series, including four-wheel Dunlop disc brakes, an outside-plug Tipo 128E engine, and a central gearshift location.
The car was originally commissioned as a 'Cabriolet Speciale', according to the factory build sheets, but when the bare chassis arrived at Pinin Farina, the decision was made to create a unique Coupe Speicale that combined the elements of the 250 GT Coupe with the recently introduced 400 Superamerica Coupe Aerodinamica.
The car has a one-off Pinin Farina body with the front section of the 250 GT, a hood scoop, and auxiliary driving lights located behind the eggcrate grille. From the windscreen back, the coachwork was nearly identical to the Coupe Aerodinamica, carrying over the model's curved A-pillars, fastback design, and distinctive rear-end treatment. Pinin Farina outfitted the cockpit with the standard 250 GT dashboard arrangement with several bespoke appointments, such as a luggage shelf, an armrest with locking map compartment, and a Superamerica-style center console.The car was finished in Celeste and upholstered in blue Connolly leather.After completion, the car was shipped to England aboard the Silver City Airways Bristol Superfreighter and unveiled to the public at the 46th London Motor Show held at the Earls Court Exhibition Centre October 18, 1961 through October 28, 1961.In November, official UK Ferrari dealer Maranello Concessionaires Ltd. sold the car to its first owner, Mr. Mason, who maintained residences in both Jersey and in Portugal. In 1971, after passing through the ownership of British dealer Brian Classic, the car was sold to William Kidd of Woodland Hills, California. In the fall of 1978, Mr. Kidd offered the Coupe Speciale for sale, describing as completely original with 49,000 miles. The following year, it was sold to Lorenzo Zambrano through Dutch broker Rudy Pas.
The car was sold to John W. Mecom Jr. of Houston, Texas in 1982. After two years in the Mecom Jr. collection, the car was sold to Leonard Blamock of Dallas, Texas, and subsequently passed through several US collectors including Stan Makres of Grosse Pointe, Michigan.
In 1988, Karl Schaffrath of Cologne, Germany, acquired the car. It would not remain in Europe for very long, as it was sold to Don Young of Santa Barbara, California, in May of 1989. It remained with Mr. Young for three years. In 1992, Lorenzo Zambrano re-acquired 2821 GT and displayed it at that year's Pebble Beach Concours d'Elegance. During the 1990s, the car was selectively display, with an appearance at Concorso Italiano in 1994 and in the Petersen Automotive Museum's Ferrari at 50th Exhibition.In the late 1990s, Mr. Zambrano commissioned a complete restoration. Upon completion, it was shown at the 2001 Pebble Beach Concours d'Elegance, where it was displayed in Class M-2, Ferrari Grand Touring where it was selected as First in Class. It was then shown at the Ferrari Club of America national Meeting and Concours in Los Angeles, where it received la Platinum Award. It has recently been shown at the 2013 Pebble Beach Concours d'Elegance in the care of its current owner.Ferrari built just five 250 GTs with custom coachwork in the style of the 400 Superamerica Coupe Aerodinamica. There is also the 250 GT Sperimentale, a Scuderia Ferrari-prepared competition car that served as the prototype to the 250 GTO. The other examples, chassis number 2429 GT, 2613 GT, and 3615 GT, were built on Ferrari's improved, late-production chassis, with Dunlop disc brakes and the more robust outside-plug V-12.

Cabriolet
Designer: Pininfarina
Chassis #: 1737 GT
This Ferrari 250 is a custom-bodied Cabriolet Speciale with chassis number 1737 built on a 2400mm short wheelbase. While coachbuilder Pininfarina was creating unique Ferraris at this time for royalty and the wealthy, this example was specifically made for display at the Geneva Motor Show, presented in March 1960 as a featured automobile.Wanting to impress the crowds, Pininfarina and Ferrari paid great attention to detail both in and out. The body style showed resemblance to the Ferrari 400 of the era, with covered headlights, three-part rear lights and a notched rear trunk. With performance in mind, the engine is a 300 horsepower, V12 Tipo 128F competition unit from a 250 TR 'Testa Rossa,' which was a successful racing car for Ferrari. Inside the cockpit is a lavish interior that was the best Pininfarina had to offer at the time. The car is capable of 0-60 in just over six seconds, and has a top speed of over 150 mph.After display, it was sold in France and had several owners before coming to the United States in 1979. The car was purchased by the current owner in 1988 and restored by Classic Coach Repair in 1993.
The restored car was first presented at the International Ferrari Concours in 1994. During that weekend, it was also shown at Concorso Italiano at the Quail Lodge, and Pebble Beach where it was awarded a Second in Class. In 1995 it was named Best of Show at the Cavallino Classic. 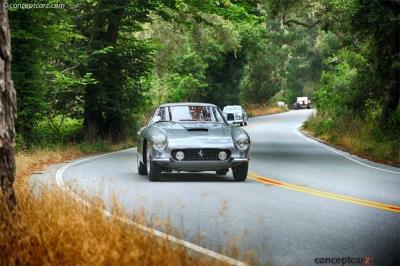 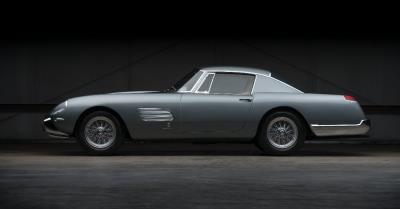 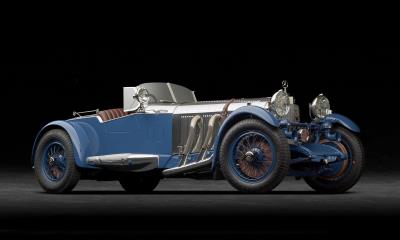