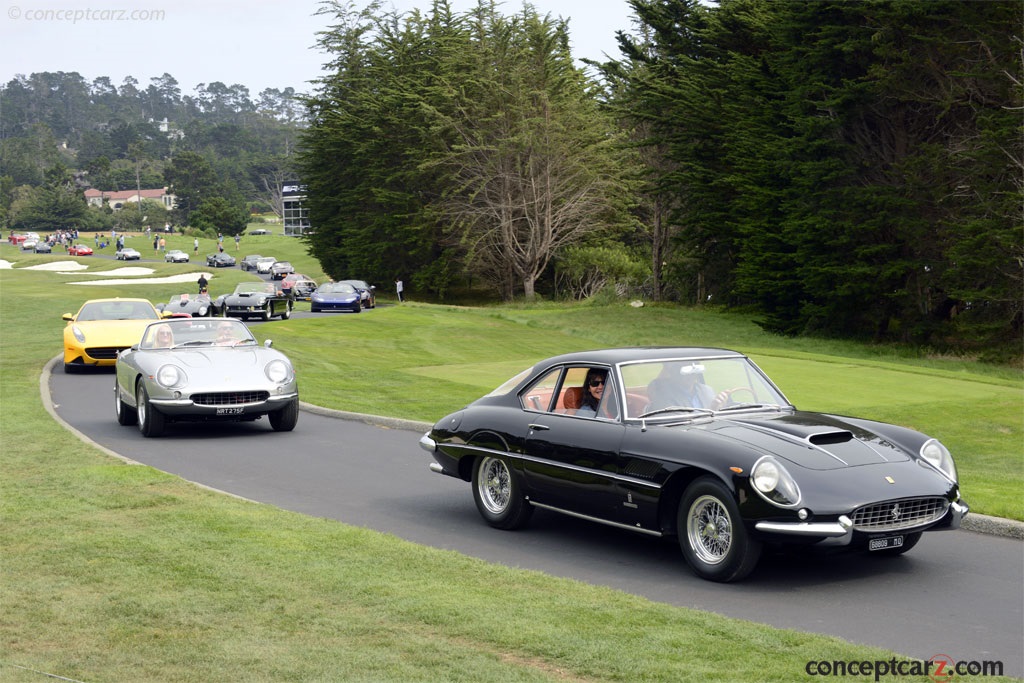 The 500 Superfast was the last in a line of luxury Ferrari GT's. Introduced in 1964, production continued until 1966 with just 37 examples being produced.

Production of luxury Ferrari GT's began during the early 1950's with the introduction of the 342 America. Based on the 340 America, it featured a chassis that had been extended to provide ample interior space. The mechanics were similar, outfitted with a derivative of the Lampredi's 'long block' engine.

Next in line were the 250 Europa and 375 America. The Ferrari 375 was introduced at the Paris Salon in 1953. During its production run which lasted until May of 1954, less than 45 examples of the 375 America were produced. The car was constructed for Ferrari's clientele who had the means to afford one of these beautiful creations. Since they were produced in limited numbers, the production took far longer than volume models. Power was provided by a 4.5-liter Lampredi designed V-12 engine with either three twin choke Weber 40 DCZ or DCF downdraughts, resulting in 300 horsepower. On all four corners were drum brakes, Borrani wire wheels accented the exterior of the vehicle, and a leaf spring suspension was used in the front and the rear. With the four-speed manual gearbox, the car could achieve a top speed of 150 mph and could race from zero to sixty in less than seven seconds.

In regards to the 375, Pinin Farina was tasked with building the bodywork for many of the models. The Pinin Farina design shared a similarity with the 250 Europa's. The dimensions of several automobiles were similar but their interiors, wings, bumpers and detailing were all unique.

In 1955, Enzo Ferrari displayed a polished chassis #0423 SA at the Paris Salon. The completed version of the 410, crafted by the Italian coachbuilder Pinin Farina, was displayed at the Brussels Salon in January of 1956. As was the style of Ferrari, many variations of this vehicle were built. This is due to the fact that Ferrari used different coachbuilders during the vehicles assembly. Coachbuilders such as Boano, Ghia, and Scaglietti produced versions such as the Testa Rossa, Series I, II and III, and Superfast. This included Coupes and cabriolet versions. Mario Boano produced two, one by Ghia, one by Scaglietti, and the remaining thirty were by Pinin Farina.

In 1959 Ferrari ceased production of the Lampredi engine. Instead, a Colombo deigned 'short block' V-12 engine would provide the power for the next iteration of Ferrari Luxury GT's, the 400 SuperAmerica. A few years later, the four-liter engine was enlarged to five and the final increment of the Luxury GT's was introduced: the Ferrari 500 Superfast. The five liter engine was capable of producing 400 horsepower. The aerodynamic bodies complimented its engine and did glory to the Superfast name. Top speed was achieved at 175 mph. The chassis was multi-tubular. A four-speed manual gearbox with overdrive provided power to the rear wheels. Later, the four-speed was replaced by a all-synchromesh five-speed unit.

These special-order vehicles were customizable. Their dimensions, colors, upholstery, carpets, etc were selected by the owner. Because of this, the specifications vary.

The 500 Superfast was Ferrari's fastest, most expensive, most exclusive, and most powerful vehicle at the time. With production only reaching 37 units, their exclusivity is guaranteed in modern times.
by Daniel Vaughan | Dec 2008

The 400 Superamerica was produced between 1959 and 1962 with 25 examples produced. They had varying bodywork styles by Pininfarina and Scaglietti and all rested on a short wheelbase. The first example was put on display at the Torino Motor Show in 1959. The 400 was replaced by the 410. The 400 Superamerica was Ferraris first road model to not be named by the volume of a single cylinder. The 400....
Continue Reading >>

An ultra-rare, extremely expensive, very fast vehicle, the Superamerica featured a low grille opening and covered headlights. With a long sloping rear deck combine with the double curvature of the windshield and rear window, the car had a taut, muscular look in keeping with its performance capability. Built as if for a king, the inside of the Ferrari 400 Superamerica features a lavish interior with....
Continue Reading >>

This Ferrari (serial number 2311 SA) might be mistaken for a short wheelbase California, but it is built on a slightly longer 400 Superamerica chassis and uses a four-liter V-12, not the three-liter California engine. The body is steel and the engin....[continue reading]

Unveiled in 1960, the 400 Superamerica was aimed at Ferrari's most exclusive clientele. With bespoke construction and exceptional power provided by a 340 horsepower version of Ferrari's 4.0-liter V-12, just 26 were produced through 1963. The Superame....[continue reading]