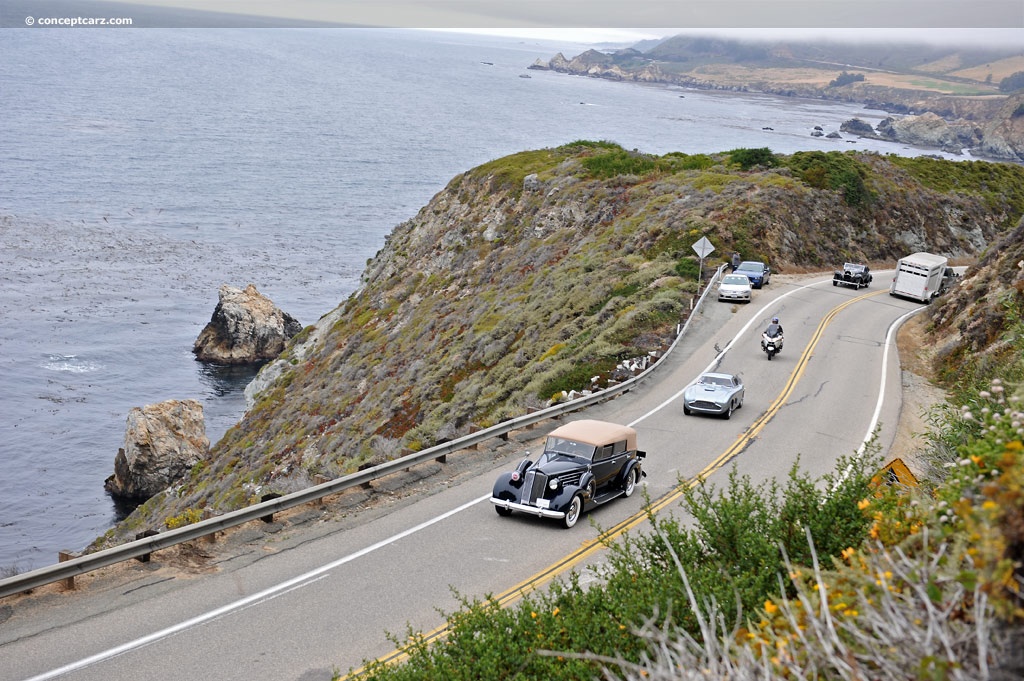 The Packard Twelve was a conservative and elegant automobile with a refined chassis and a whisper-quiet engine. For 1935, Packard introduced all-new bodies that offered true envelope styling with the body, hood, fenders and running boards incorporate....[continue reading]

The later series Packard V12s have been referred to in the press as 'the nearest thing to steam' in an internal combustion engine. A drive in this two-passenger coupe will demonstrate that. The year 1937 was Packard's best sales year to that date, ....[continue reading]

Packard's V12 series automobiles were produced in the greatest numbers in 1937; that year 1,300 cars were sold. This particular roadster was delivered new to Italy, an example of Packard's successful export marketing. The use of independent front s....[continue reading]

Manufactured near the end of the classic car era, this 1507 series Packard Convertible Coupe cost more than many moderate homes of that era.....[continue reading]

'Ask the Man who owns one' was the slogan of this Detroit built luxury automobile manufacturer.....[continue reading]

The year 1937 was Packard's best sales year for V-12s, with 1,300 cars delivered. It was also a year of many improvements, including the addition of hydraulic brakes and independent front suspension. By this point in its evolution, the Packard Twelve....[continue reading]

Many consider the 1935 to 1939 Twelve's to be the finest automobiles ever produced by the Packard Motor Car Company. It is true that they represented the end of an era; never again would Packard offer the exceptional quality of a hand-built senior ca....[continue reading]

This automobile was originally delivered in San Antonio, Texas. It was purchased twenty years ago by Dee Howard, of San Antonio. Dee restored the car in the recent past, and has taken it on several CCCA caravans. It has won first place in both the Ju....[continue reading]

Packard's 15th Series was introduced on September 3, 1936. An incredible 50 models were available for 1937. With the success of its 120 Model, Packard decided to go even further into the mid-price territory with the introduction of the Six priced jus....[continue reading]

The Fifteenth Series Packards of 1937 saw a comprehensive list of mechanical improvements over the previous series. Most notably, the introduction of 'Safe-T-Flex' independent front suspension based on the design of the junior One-Twenty was debuted ....[continue reading]

The 15th Series 'senior' Packards of 1937 were given 'Safe-T-Flex' independent front suspension and hydraulic brakes with a vacuum-boosted brake and clutch. They were conservatively elegant automobiles with a modern design and were elegantly appointe....[continue reading]

For 1937 Packard sold 1,300 12-cylinder cars. Only 41 special order coupes were ordered and a half dozen survive today. This was the absolute pinnacle of custom Packards as the coupe sold for in excess of $110,000 in today's money. Each was special o....[continue reading]

Packard produced the Twelve Series from 1933 to 1939. Its name referred to the twelve cylinder engine that displaced 473.3 cubic-inches and produced 175 horsepower. The V12 could propel the car from zero-to-sixty mph in 17 seconds. They featured vacu....[continue reading]

Packard's 15th Series was introduced in September 1936, and around 50 different models were available for 1937. Packard offered new vehicles in almost every price bracket, but only a handful received custom coachwork by such greats as LeBaron and Die....[continue reading]

The Packard V12 series automobiles were produced in the greatest numbers in 1937 when 1,300 were sold. The 15 series upgrades included an independent front suspension and a new hydraulic braking system that replaced the outdated mechanical brakes. Th....[continue reading]

Packard's top models set the standard for the American luxury car industry, and the Twelve is considered to be not only one of the marque's finest automobiles but one of the most significant creations of the Classic Era. It was produced from 1932 to ....[continue reading]

By the 1930s, the Packard Motor Company of Detroit, Michigan had a lineup of car models unlike anyone else. The company would sell over 100,000 cars in 1937, mostly 6 or 8 cylinder models. Packard's first twelve cylinder engine automobiles became syn....[continue reading]

Packard was an American luxury automobile manufacturer based in Detroit. The first Packard automobiles were produced in 1899, and the last Detroit-built Packard left the line in 1956.....[continue reading]