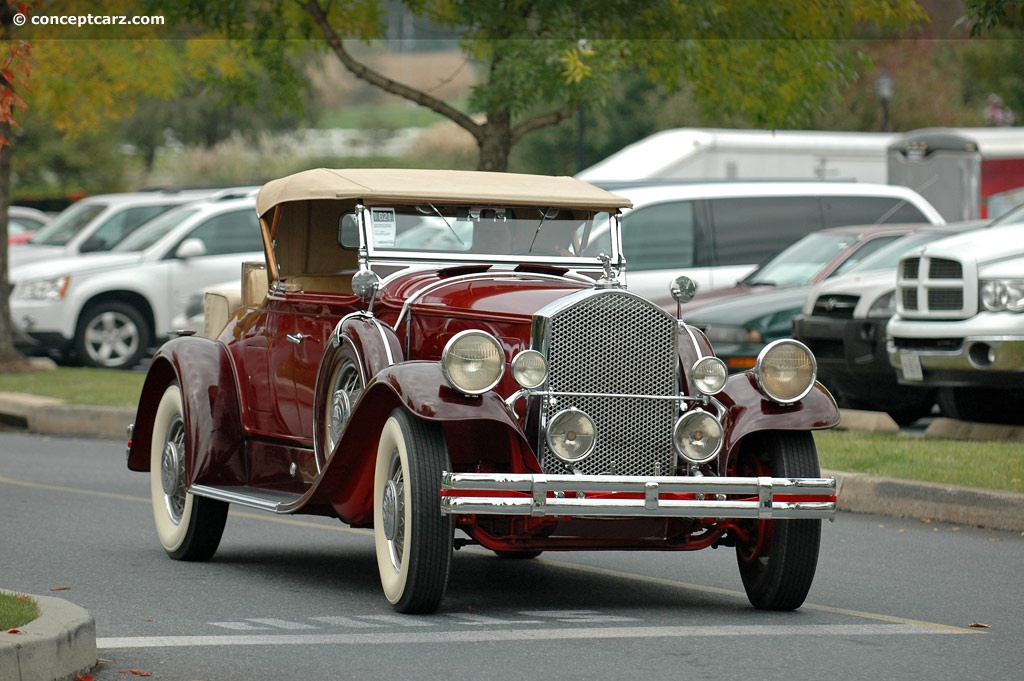 The Pierce-Arrow was a leading luxury nameplate in the early American automobile industry. George Pierce had started by the manufacturing of household items such as iceboxes, bathtubs, and birdcages and later bicycles. He later experimented with automobile production using popular power sources such as steam. A Scottish engineer named David Fergusson was brought in to help with the developmental aspects of engine design and production. The first successful Pierce automobile, a Motorette, was in 1901 and featured a single-cylinder DeDion engine producing nearly 3 horsepower. By 1903 the Pierce automobiles were powered by their own engines that they had designed and manufactured.

By the early 1910's Pierce was using exotic metals such as aluminum that not only was light-weight but was also very rigid. Pierce-Arrows were also known for their 'frog eye' appearance, named after their use of headlight integration into the fenders.

The company endured World War I and by the 1920's, competition had become pretty fierce. Not only were many marques furthering their development on new technology, but they continued to produce stylish and modern designs. Pierce-Arrow was a strong believer in their six-cylinder engine while other manufacturers were using more powerful and tunable eight-cylinder engines. The Pierce-Arrow design did not change drastically during the 1920s, another potential reason for their ultimate demise.

The onset of the Great Depression and problems with management prompted a merge with Studebaker. A short time later the Pierce-Arrows were being equipped with eight-cylinder engines which helped stimulate sales. By the early 1930s a 12-cylinder could be found in the Pierce-Arrows. Their engines were strong and powerful, capturing over 13 speed records at the Bonneville Salt Flats.

In 1933, Pierce-Arrow and Studebaker were both feeling the effects of the Depression. Studebaker was forced to sell Pierce-Arrow. The company was again rescued; this time by a group of Buffalo based investors. With this new life provided to Pierce-Arrow they were able to produce an improve model-line-up for 1935 and again in 1937.

The Packard Company was managing to stay afloat by creating a lower-cost line that appealed to a broader market segment and had increased revenue and sales. Pierce-Arrow attempted to mimic their achievement by introducing the low-priced One-Twenty model. The move may have worked if it had been done earlier, and Pierce-Arrow was forced to cease production in 1938. On Friday, May 13th the company was sold at auction.

This 1930 Pierce-Arrow Model B Roadster carried a $2975 factory price tag. It was equipped with an eight-cylinder 366 cubic-inch engine capable of producing a respectable 125 horsepower. The front headlights are integrated into the front fenders and a covered, side mounted spare wheel can be found located in front of the drivers side door.
by Daniel Vaughan | Nov 2008
Vehicle Profiles

The low-priced Series 80 helped boost sales of Pierce-Arrow cars to an impressive number of over 5000 vehicles. Even with this boost, the company was financially unstable. Competition from other automakers was continuing to escalate and Pierce-Arrow ....[continue reading]

In order to stimulate declining sales in this depression year, Pierce-Arrow offered three different eight-cylinder engines and two wheelbase lengths. Despite the variety of models offered, sales began a decline which was to continue. This examples ....[continue reading]

Mr. Waterhouse, the owner of the automobile, is the Grandson of Charles L. Waterhouse, one of the founders of the Waterhouse Custom Body Co. The car is a 1930 Pierce Arrow, 8, Model B Convertible Victoria with Waterhouse coachwork. ....[continue reading]

In 1928 Pierce-Arrow merged with Studebaker. Sales doubled in 1929 but the long-term problem for Pierce-Arrow - and all luxury automobile manufacturers - was the troubled American economy. By 1938 Pierce-Arrow closed its doors.....[continue reading]

In 1928, Pierce-Arrow introduced a lower-priced model dubbed the Series 80. This was in response to declining sales and the unquestionable future of the company. Another big decision was the alliance with Studebaker, which had a hefty cash surplus ....[continue reading]

Pierce-Arrow was one of the few luxury marques willing to add a lower-priced lineup in order to combat the effect of the Great Depression. This would prove to be a poor decision as the company was out of business in 1938. ....[continue reading]

It was not until 1930 that Pierce made an eight-cylinder car. Pierce-Arrow was generally viewed as a conservative luxury vehicle and while this roadster is certainly a much more racy open model it's restoration in a conservative single tone paint and....[continue reading]

Translated from the French, Tireur d'Arc means simply 'drawer of the bow,' the poetic variation of archer. The first Pierce-Arrow archer (hood ornament) was slender, partly clothed and helmeted, but he later took off all his clothes, grew more muscul....[continue reading]

Pierce-Arrow became known as the car of Presidents beginning in 1909, when President Taft used one for official occasions. This practice continued until the last Pierce-Arrows were ordered by the White House in 1935. The new Pierce-Arrow models for 1....[continue reading]

Pierce Arrow was a leading luxury car maker, competing with marques such as Packard and Lincoln. The company started in 1878 as the George N. Pierce Co. making bicycles, and introduced its first car in 1901. In 1908 the company's name was changed to ....[continue reading]