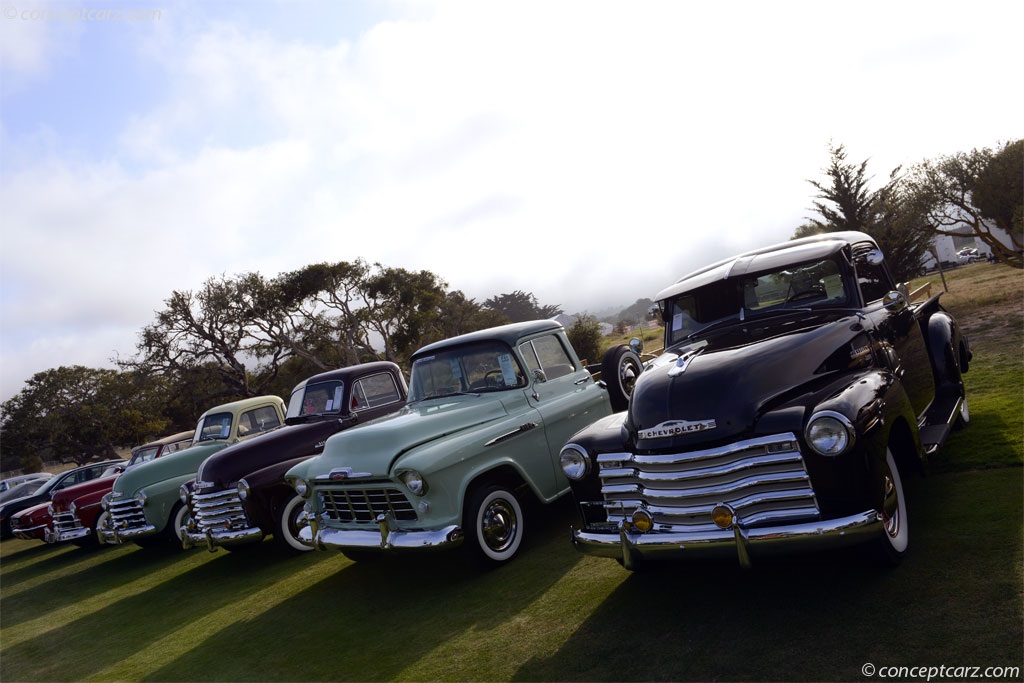 Around the start of World War I, Chevrolet began producing trucks. Their first year of production netted just under 900 sales. The following year in 1919, there were over 8,200 produced. And by the close of the 1930's, Chevrolet had produced over a half-of-a-million trucks. Originally the trucks were produced in two separate steps. First, a chassis was constructed. The chassis was then sent to a factory to receive its body, usually a pickup, express truck, or a panel truck. The acquisition of the Marin-Parry Corporation by General Motors in 1930, allowed Chevrolet the opportunity to streamline their build-process and offer a wider range of truck products. In just a few years, Chevrolet was responsible for half of all American light truck production.

Chevrolet had produced over two million trucks by the time World War Two began, which halted civilian vehicle production. In 1947 Chevrolet introduced their 'Advance Design' for their light truck model line. An 'alligator' hood concealed the engine while the horizontal grille bars completed the stylish appearance of a modern truck. The elegant design remained virtually unchanged from 1947 through 1954.

A DeLuxe package was offered, one of the only options available, included chrome grilles and chrome triple speed-line moldings of the fender sides. The standard versions had painted grilles.

This is an example of one of the 345,519 trucks produced by Chevrolet in 1949. The 3100 Series was available as a Pickup, Panel Truck, Canopy Express Truck, and Suburban. They were also supplied as an individual chassis which allowed custom commercial body builders to create a combination that was exactly what the customer required. This 1949 Chevrolet 3100 GP Pickup Truck had a factory price of $1253. It was powered by a six-cylinder 216.5 cubic-inch engine that was capable of producing 90 horsepower. The body rode atop a 116 inch wheelbase.
by Daniel Vaughan | May 2006In 1948, Chevrolet unveiled a new line of pickups which they termed the 'Advanced Design' truck. Standard equipment included a heater and a defroster, a luxury in those days. The cab was enlarged by eight inches and was seven inches taller. This made seating for three a reality. To improve visibility, the windshield was enlarged and cut into two pieces. In the front, the grille featured a horizontal design and recessed headlamps. The fenders became rounder, complimenting the aerodynamic and smooth body.

The trucks were customizable and offered with a wide array of optional equipment, ranging from engine upgrades to chrome accents.

Chevrolet put their new truck line on most commercial vehicle designs, ranging in size from 116 inches all the way up to 137 inches. Chevrolet was selling everything from Panel trucks to school buses.
by Daniel Vaughan | Aug 2006

The Chevrolet 3100 Pickup, or the Advance Design series was General Motors first major redesign following World War II. Delivering a design that was rougher and tougher and more durable than previous designs, the 3100 was much more updated. Launched in June of 1947, these trucks continued in production until March of 1955. The Task Force Series trucks replaced the Advance Design model. From 1947....
Continue Reading >>

Chevrolet's 2100 Series was the 1/2-ton light-duty commercial pickup in the company's lineup. For 1949, there were few exterior changes over the preceding post-war Advance Design models. Inside, they had a wider bench seat with improved cushioning. U....[continue reading]