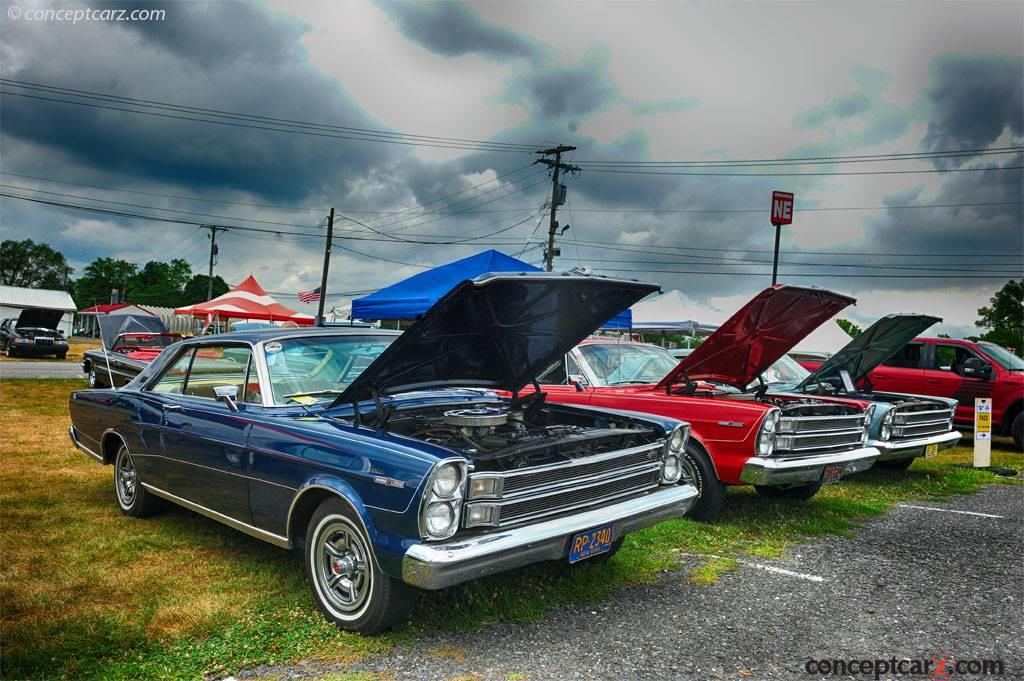 The once-popular full-size performance car was beginning to lose momentum in the market place by 1966, as those duties were being regulated to the mid-size Fairlane models and the sport-compact Mustang. Ford's Total Performance marketing campaign was demonstrated at tracks around the world, and the Race on Sunday, Sell on Monday mantra was paying huge dividends. The Mustangs, Cobras, and Ford GT40s were capturing headlines and dominating racing circuits everywhere they went.

The Galaxie, Thunderbird, and Fairlane were quietly equipped with performance features and garnered their own respect and headlines. The 1966 Fairlane received a makeover that more closely resembled the full-size Fords with stacked headlights, trim appointments, and taillight treatments. Among the vast list of available engines were the 390 and 427 units, with the 390 being a capable street and track performer, while the 427s were happiest on the track. When properly equipped and with serious weight reductions, these were among the fiercest competitors Ford ever built.

The buyers of the big-cars still had the high-performance options and for 1966 and there were two versions of the 'wedge' head 427 CID V8s listed, a W-code single-4-barrel rated at 410bhp, and the R-code, with dual Holley 4-barrels and rated at 425bhp. These power output ratings had remained fairly constant since introduced in 1963, despite improvements such as tuned cast iron headers, better breathing intake manifolds, and more. The 427 packages came standard with heavy-duty suspension as well as the differential, driveshaft, and rear axles. They had modified transmission mounts output shaft and universal joints. All Galaxies equipped with the 427 came with dual exhaust as standard equipment and a chrome dress-up kit for the oil cap and valve covers. Equipment restrictions still applied such as no power steering or brakes and especially no air-conditioning. By 1966, all Galaxie models were fitted with 15-inch wheels, but those on the performance models were considerably stronger than the standard passenger car.

For 1966, the Ford Galaxie line consisted of the Galaxie 500 (with six- or eight-cylinder engines), the Galaxie 500XL, Galaxie 500 7-Liter, and the Galaxie 500 LTD Series. The Galaxie 500 was the most popular of the full-size 1966 Ford Galaxie line and among its four body styles was the 2-door hardtop which accounted for 198,532 sales. The sedan was also very popular with 171,886 examples sold. The other body styles in the line up also received strong sales with the 4-door fastback sedan finding 54,886 buyers and the convertible having 27,454 sales. Body styles in the 500XL and 7-Litre were limited to the 2-door fastback and the convertible. The LTD was available as a hardtop sedan and fastback coupe.

The base engine in the intermediate trim level Galaxie was an overhead-valve, 240 CID six with a Holley one-barrel carburetor delivering 150 horsepower at 4,000 RPM. Eight cylinder engine options included a 289, 352, 390, 427, and 428 in various states of tune with horsepower ranging from 200 to 425 hp. Standard Galaxie 500 features included stamped aluminum rocker panel moldings, a stamped aluminum inset between two chrome strips on the vertical section of the trunk lid, a chrome hood ornament, and the Ford crest on the front fender. The word 'Ford' could be located in block letters on the rear trunk lid. The interior was done in two-tone vinyl trim and simulated wood appliques were used on the instrument panel trim pieces.

Just a step above the Galaxie 500 was the 500XL's with bucket seats and a sporty center console. There was polished door trim, carpeting on the lower position of the doors, dual-lens, floor-mounted shift lever, rear reading lights in the hardtops, Galaxie 500XL badges, and courtesy/warning lights in the door panels. The base engine was the 289 CID V8 with 200 horsepower and backed by the Cruise-O-Matic automatic transmission.

For 1966, a new family of V8 engines was introduced and the biggest available was the 428ci V8. A special package was created combining the 500XL's appointments and this new big-block V8 and marketed as the 7-Liter. Special badging helped announce the potent engine lurking under the hood, along with unique wheel covers and the letter 'Q' in the fifth position of the serial number. There were bucket seats, floor shift controls, and a sport steering wheel. Other features included power disc brakes, low restriction dual exhaust, and a non-silenced air cleaner system. Prices were approximately $300 higher than the 500XL and sales reached 11,073 units with 2,368 of those being the convertible. The fastback coupe accounted for the remainder of the 8,705 sales. The cruise-O-Matic was standard with the four-speed manual transmission available as a no-cost option.

The Galaxie's top trim level for 1966 was the LTD that included the 289 CID V8 with 200 hp, a Cruise-O-Matic automatic, simulated walnut appliques on the lower edge of the instrument panel and the door inserts, courtesy/warning lights, ashtray lights, glove box lights, a self-regulating clock, and Gabardine finish headliner and sun visors. Among the engine options were the 428 CID designed more for smooth power delivery at low RPM, helping to propel the Galaxie family to the forefront of the full-size luxury segment. The base price of the Fastback coupe was similar to the price of the 500XL, at $3,200. The hardtop sedan was priced at $3,280 and 69,400 examples were sold. The fastback coupe accounted for 31,696 sales.
by Daniel Vaughan | Aug 2020

The Ford Galaxie entered the scene in 1959 and was offered in various configurations. The model line consisted of a Club Victoria, Town Victoria, Club Sedan, Town Sedan, Sunliner Convertible, and Skyliner Retractable. Similar to the Fairlane, they were distinguished by differed ornamentation. The highlight of the 1959 model line was the Skyliner Retractable that had an all-steel hardtop that could....
Continue Reading >>

This Ford Galaxie 500 is powered by a 428 cubic-inch 4-barrel engine offering 340 horsepower. It has a Cruise-O-Matic, 3-speed automatic transmission and is painted in the correct Candy Apple Red and Wimbledon White exterior. It has its original red ....[continue reading]