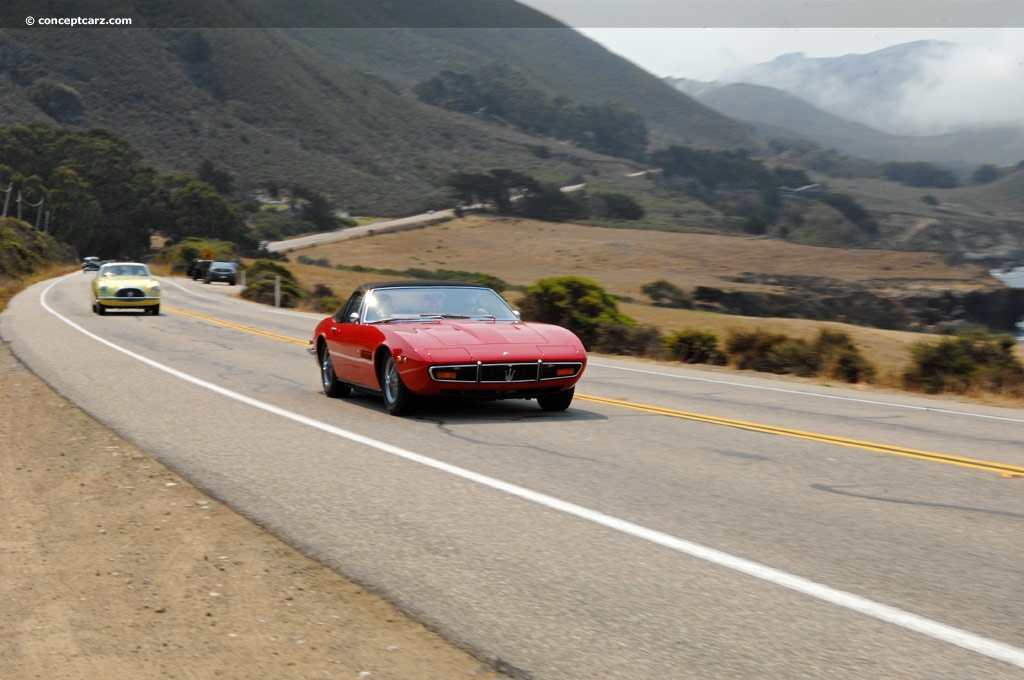 The Maserati Ghibli was put into production in 1967 but it was the prior year at the Turin Auto Show where it made its debut. The 2+2 coupe body was designed by Giugiaro, an employee for the Ghia design studio. The headlights were pop-up configuration adding to the sleek and aerodynamic design. Powered by a 4.7-liter eight-cylinder engine, the vehicle produced 340 horsepower. The rear suspension was comprised of a live axle with leaf springs and an anti-roll bar while the front used an independent suspension with double wishbones and coil springs plus an anti-roll bar. The Ghibli sat atop a Mexico chassis that had been shortened and received increased stiffness and rigidity. Ventilated disc brakes were placed on all four corners and a five-speed manual gearbox helped send power to the rear wheels. In 1968 a three-speed automatic was offered as optional equipment.
In 1968 a convertible was offered, also designed by Ghia. To add to the versatility, a hard-top was offered on the convertible, making the vehicle suitable in all types of weather and driving conditions.

Giorgetto Giugiaro, while working at Italian coachbuilder Ghia, designed the Ghibli's steel body, with its low, shark-shaped nose. Power was from a 4.7 liter four cam 330 horsepower V8 giving it a zero-to-sixty mph time of just 6.8 seconds and a top ....[continue reading]

This Maserati Ghibli was designed by Giorgetto Giugiaro which working for Ghia and displayed at the 1966 Turin Italy Automobile Show. It was conceived to serve the same market as the Ferrari 365 GTB/4 'Daytona' and the Lamborghini Miura. Production o....[continue reading]

The first Ghibli was a two -door, 2+2 GT released in 1967. This car was the second Maserati GT named after winds. The Ghibli is a strong, hot wind most common during spring and autumn which blows across the Sahara and Arabian deserts; it carries huge....[continue reading]

The Maserati Ghibli was introduced at the 1966 Turin Auto Show. It wore a design by Giorgetto Giugiaro, a young designer, who created the Ghibli design in just three months. The coachwork was handled by Ghia. It is believed that Henry Ford paid an as....[continue reading]

BMW celebrates 40th anniversary of BMW of North America as well as the companys first major motorsports victory in the US at the 12 Hours of Sebring with the1975 BMW 3.0 CSL. The 50th anniversary of ALPINA will be celebrated by showcasing a 1970 BMW...
© 1998-2021. All rights reserved. The material may not be published, broadcast, rewritten, or redistributed.