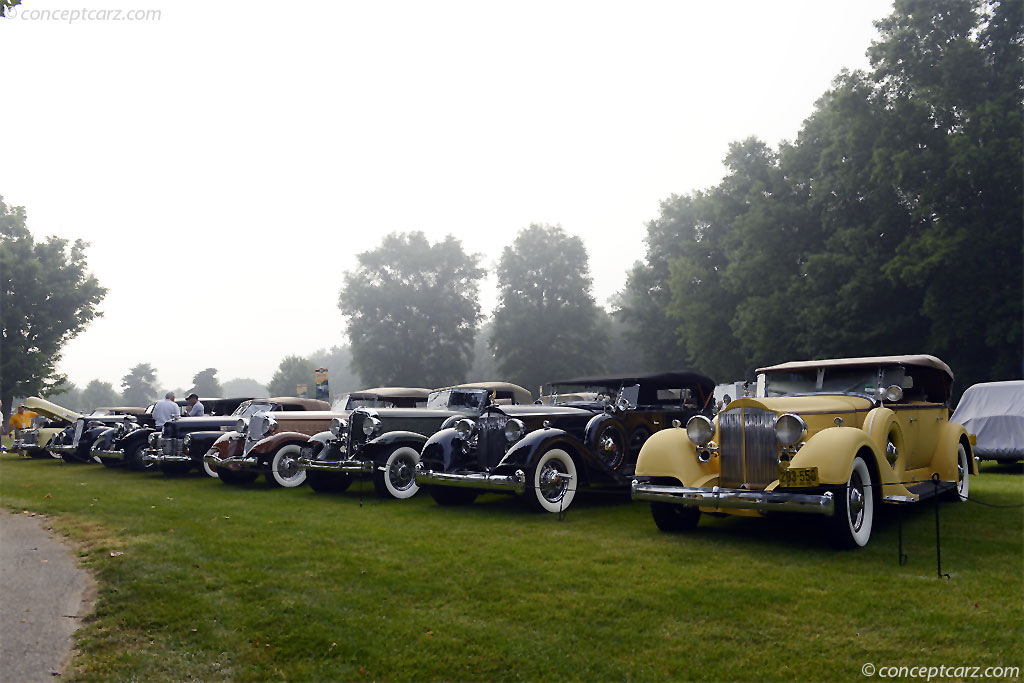 For 1934, Packard expanded its catalogue, from six models resting on five wheelbases to nine models on six wheelbases. The Eleventh Series were given new fender contours, with the fronts curving downward reaching nearly to the front fender. Additional changes were made to the hood door handles, running boards, better upholstery, radiator caps, and a fuel filler integrated into the left tail lamp. The engine compartment featured a new oil cooler and a new oil filter. Due to an optional radio, Packard installed a larger generator.

The 1934 Packard 1104 had a wheelbase that reached nearly 142 inches and power was supplied by an L-head straight-eight engine displacing 384.8 cubic-inches and offered 145 horsepower. There was a three-speed selective synchromesh transmission and mechanical brakes on all wheels.
by Daniel Vaughan | Apr 2019

Packards twelve-cylinder cars were originally known as the 'Twin Six'. It was a 60-degree V12, with two blocks of six-cylinders set on an aluminum crankcase. It was designed by chief engineer Jesse Vincent and gave the engine a displacement size of 4....[continue reading]

Packard produced their first automobile in 1898 from their factory in Warren, Ohio. James Doud Packard managed the finances while James Ward Packard oversaw production. Within a few years, the company moved to Michigan to be closer with their Detro....[continue reading]

The Packard 1104 Super Eight, with a length of 142 inches, was produced from August 1933 until August 1934 alongside the shorter 1103 and longer 1105. The 11th series is often considered to be the ultimate Senior Packard as it was the last car with c....[continue reading]

In 1899, James Ward Packard debuted his first automobile. During the birth of the automobile, there would be many would-be automobile moguls. By the 1930s, however, the list of early contemporaries had fallen by the wayside. The Packard remained and ....[continue reading]

This Packard is a Club Sedan and was the 319th of 325 produced on the 142-inch wheelbase Super Eight chassis. It was originally delivered to Brooklyn, New York and has a history that can be traced back to 1950, with the ownership in the Empire State ....[continue reading]

This car debuted at the New York Auto Show in 1934. The eye-catching color known as 'Orello', which Packard often used for cars destined for major auto shows, but never listed as a catalogue color, is quite extraordinary. Herbert and Agnes Greer, of ....[continue reading]

The 1934 Packard models were designated the Eleventh Series and they represented the height of the company's pre-war efforts. These were the final models with traditional open fenders and the upright radiator shell for which the company had become we....[continue reading]

This Packard Model 1104 Phaeton rides on a wheelbase that measures 142 inches and is powered by a 385 cubic-inch straight-eight engine producing 145 horsepower. In 1934, the car sold for $3090. It is equipped with dual sidemounts, clock, cigar lighte....[continue reading]

This Coupe Roadster wears an older restoration but is reported to be in great mechanical condition. It has a new boot cover and new pile carpeting. The complete ownership history is unknown.....[continue reading]

This Series 1104 Super 8 Packard was entered by Dr. Barbara Atwood in the 1985 Great American Race. This re-enactment was to honor the Packard Model F Runabout that traveled from San Francisco to New York in June of 1903. This amazing accomplishmen....[continue reading]

This 1104 Super Eight Packard wears a Coupe Roadster body and has never been restored. It has recently been removed from its resting place, in dry storage, where it had been for around three decades. It is painted green. It is believed that a re-p....[continue reading]

Packard was one of the earliest automobile makers and produced their first car in 1899. In the early days of motoring, hundreds - even thousands - of auto companies came and went but few survived the years. Packard not only survived, but thrived by f....[continue reading]

The current owner of this Series 1104 Super Eight Two-Passenger Coupe acquired it a few years ago from a previous long-term caretaker on the East Coast. It has an older but well-preserved restoration, and is finished in two-tone color scheme of red w....[continue reading]

The Packard catalog was expanded for 1934, from six models on five wheelbases to six wheelbases and a full nine different models. This Eleventh Series had new fender contours, with the fronts curving downward nearly to the front bumper. Inside, there....[continue reading]

Packard introduced its Eleventh Series cars in August 1933 and it remained in production for two years. Three models, the 8-cylinder Eight and Super Eight, and the V12 engined Model Twelve were available in 41 different combinations of wheelbases and....[continue reading]

For more than a century, automobile enthusiasts have considered Packard to be the epitome of elegant design and high-quality engineering. The year 1934 (which the Packard company dubbed the Eleventh Series) is considered by many as the pinnacle of Pa....[continue reading]

Franklin D. Roosevelt was elected President in November, 1932. With the depression raging, in January 1933 Packard introduced the all-new Super 8 models in hopes of increasing sales in the slightly lower priced market. This model, a Super 8 Coupe Roa....[continue reading]

This seven passenger touring car was used through the late 1940s by the United States government as a parade vehicle and VIP livery car. It was a favorite of such notables as General Dwight D. Eisenhower and Admirals Nimitz and Halsey. These heroes o....[continue reading]

Many consider the 1934 model Packards the height of the company's pre-war efforts. Dubbed the Eleventh Series, they were the final models with traditional open fenders and the famous upright radiator shell.....[continue reading]