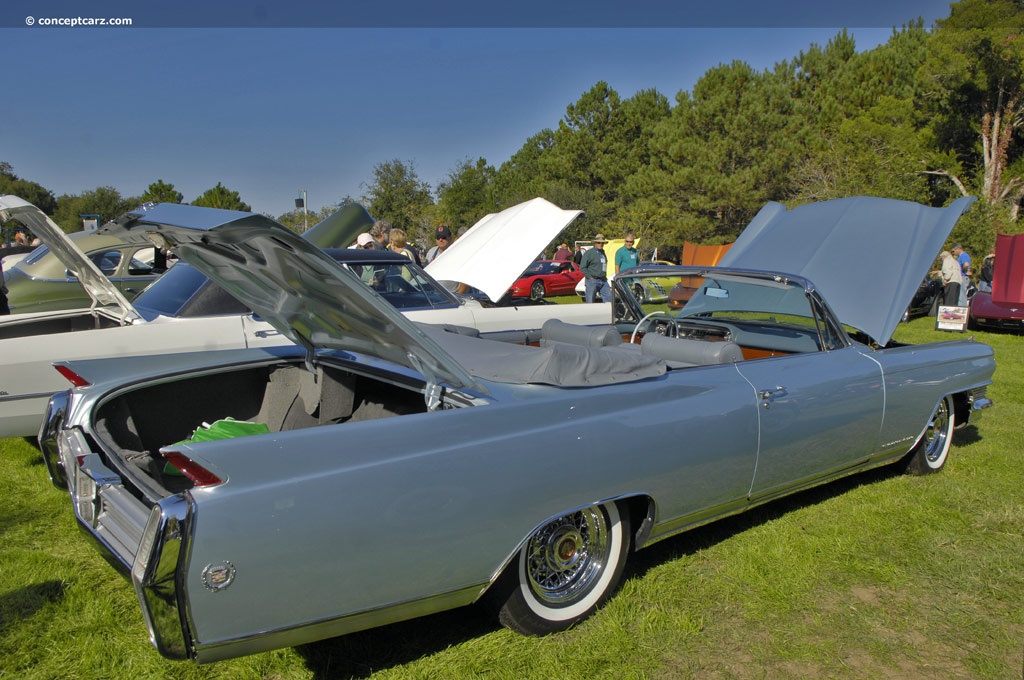 The Eldorado was a word with many meanings. It was chosen as the name to adore an upscale car that was built by Cadillac to celebrate its Golden Anniversary in 1952. Mary-Ann Zukosky, a secretary in the merchandising department, participated in an in-house competition and suggested the name. Eldorado was derived from the Spanish words 'el dorado' meaning 'golden one'. The name had first been used by the chief of a South American Indian tribe. The story was that his followers and tribe would sprinkle his body with gold dust on ceremonial occasions. He would later cleanse himself by diving into a lake.

Another story states the name represents a legendary but undiscovered city in South America filled with riches. Many European adventurers have long sought for this city including England's Sir Walter Raleigh.

'Palm Spring Life' magazine claimed the name Eldorado was derived from a Californian resort that was frequently visited by General Motors executives. The name of the resort located in Coachella Valley was the Eldorado Country Club.

In respect to the automobile built by General Motors, the Eldorado name was first used in 1953 and given to a limited-edition, low production, convertible and would continue to be used for many years. The original Eldorado was indeed a limited-production vehicle with only 532 examples created. The year prior, GM had shown the 'El Dorado' concept car in celebration of its 50 year anniversary. The Eldorado was the production version of this concept. It was based on the Series 62 and carried no special badging except a golden nameplate 'Eldorado' could be found in the center of the dash.

The convertible tops were available in black or white while the rest of the body could be ordered in one of four colors that included Azure Blue, Artisan Ochre, Alpine White, and Aztec Red. It carried a factory sticker price of $7,750 which was nearly twice as expensive as the vehicle it had been based, the Series 62.

The styling was influenced by the legendary Harley Earl who championed the wraparound windshield design along with other unique and stylish features.

The following year the Eldorado lost much of its unique qualities as it began sharing its body with other standard Cadillac's. This standardization allowed for lower, more cost-effective pricing.

For 1955 the Eldorado continued to grow in bold features and radical designs. Tailfins could now be found in the rear giving the impression the car was in motion or pointing forward, even at a standstill. The following year Cadillac introduced the Eldorado Seville, a two-door hardtop coupe version.

One of the most memorable and sought-after designs of the Eldorado appeared in 1957, the Eldorado Brougham. At a price of over $13,000, the Brougham brought ulta-luxury and four doors. Event at this high price, it is estimated that GM lost over $10,000 on each of these hand-assembled masterpieces. It cost more than most luxury marque models such as Rolls-Royce. The hardtop roof was stainless steel and it included almost every convenience option offered by General Motors, including dual headlights and air suspension. During its two-year production run, only 704 examples were produced.

1957 also saw a new rear-end design on the Eldorado, often referred to as the 'chipmunk cheeks.' Little changed in 1958 and in 1959 Cadillac scaled back on the design. Though it was a couple years older its price remained relatively the same, selling at around $13,075. The assembly was handled by the famous Italian coachbuilder, Pinin Farina. These virtually hand-built machines had large fins, 'rocket-ship' taillights, and a very modern design for its era.

1960 was the last year Cadillac built the Seville version. GM made the Eldorado a trim option on the standard Cadillac convertible which would continue until 1966.

In 1967 the Eldorado was redesigned and now shared an E-Body platform with the Build Riviera and the Oldsmobile Toronado. The styling had been courtesy of GM's styling chief Bill Mitchell. One of the more distinctive features were the hidden lights. It continued to define luxury, prestige, and style. Under the hood lurked a potent 429 cubic-inch V8 which drove the front wheels. Zero-to-sixty took less than 9 seconds. This excellent performance did not translate to all of its mechanical components and its drum brakes were rather inadequate for its size and speed. Disc brakes could be purchased for an additional price.

Strict government regulations, emissions, and safety concerns meant the Eldorado changed slightly in aesthetics and mechanical components for 1968. For 1969 the hidden headlights were no longer part of the Eldorado design. A halo vinyl roof was offered as optional equipment.

A massive 500 cubic-inch V8 engine capable of producing 400 horsepower was offered exclusively on the Eldorado from 1970 through 1975. Thereafter, it was standard on all full-size Cadillac's.

GM redesigned its full-size cars in 1971, with the new design lasting until 1975. The Eldorado was again offered as a convertible with fender skirts. The opera window design was all new and would prove to be very popular, indicated by its imitation by almost every domestic manufacturer. The opera window was a fixed rear side window surrounded by a vinyl roof.

Near the close of the 1970's, many marques were decreasing the size of their cars. The Eldorado and Toronado continued to remain large and luxurious. In 1979 the Eldorado decreased in size and now sat atop a chassis which it shared with the Buick Riviera and the Toronado. Due to increasing oil prices and stricter government regulations, the engines began to decrease in size as well.

The notchback roofline was perhaps the most distinctive feature on the Eldorado. Its rear window was nearly vertical. An independent rear suspension could now be found on the Eldorado, offering more rear passenger seating and a larger trunk while retaining a smaller body. The Eldorado Biarritz model was offered with a stainless-steel roof, just like the one that had been used on the first Brougham.

To further comply with evolving government regulations and rising fuel concerns, GM introduced a variable displacement engine in 1981. The idea was to turn off inactive cylinders while not in use. When power was needed, those sleeping cylinders would come alive and provide the power that was need. The idea was genius, but the execution was disastrous. On many occasions, it did not work well or at all which did much to scare the reputation of the Eldorado resulting in poor sales. Within the next few years, the sales rebound and the Eldorado was able to regain its market share.

By 1986, the size of the Eldorado had decreased substantially, now being similar in size to a compact car. The design was mediocre and for the first time in its history, it was available with sedan frames around its windows. Many believed that this drastic change was due to fears of skyrocketing fuel prices that would send consumers running to smaller, lighter, and fuel-efficient vehicles. Rather, fuel prices remained reasonable and the Eldorado sales plummeted. There were future revisions and aesthetic changes but sales continued to slow for the following years.

In 1992 the Cadillac Eldorado was reborn. Though it did not grow much in size it gained much ground in the styling department. Its design drew from its past and incorporated the frameless window glass that was distinctive to the Eldorado. The Northstar V8 was placed under the hood and provided excellent power and response. The styling and power resulted in increased sales and popularity. Though the four-door Cadillac Seville consistently outsold the two-door Eldorado, it had regained much of its prestige that it had lost.

For the following years, there were minor enhancements to the design and the interior.

In 2003, Cadillac celebrated the 50th model year of this nameplate. An ETC version was offered that produced an astonishing 300 horsepower. A limited number of red and white-colored cars, the same as the 1953 convertible, were produced as a tribute to the legacy of the Eldorado.

165,909 total vehicles produced by Cadillac in 1964
Total 1964 Cadillac Eldorado Biarritz production: 0
© 1998-2020. All rights reserved. The material may not be published, broadcast, rewritten, or redistributed.