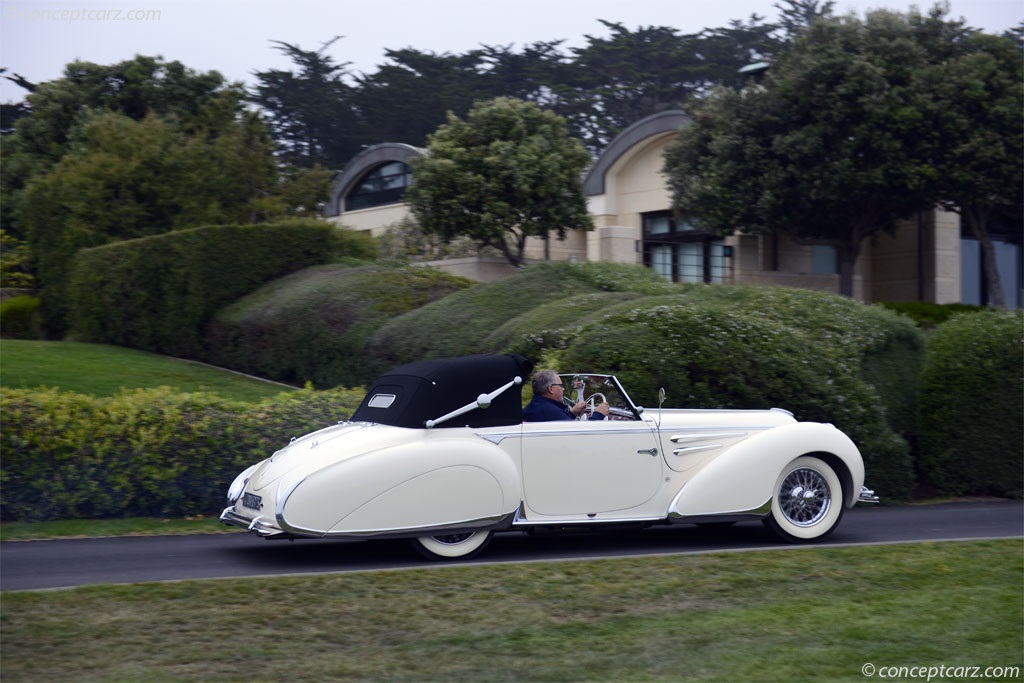 On June 7th of 1948, the Delahaye factory delivered chassis 800998 to Figoni et Falaschi coachbuilders. There it was adorned with body number 1035, a four-place cabriolet in the El Glaoui style. El Glaoui was the Pasha of Marrakech and the owner of t....[continue reading]

The Type 135 reigns as one of the most famous and prestigious Delahayes. It succeeded on the track and at the Concours. Designed in 1934, the Type 135 ran successfully in races such as the 24 Hours of LeMans, the Monte-Carlo Rally, and the Paris-Sa....[continue reading]

Delahaye has a history that goes back as far as 1845 and started out producing machinery for brick manufacturing and later stationary engines for industrial purposes that led to automobile production in 1894. Most of the cars produced were nondescrip....[continue reading]

The Type 135 was launched at the 1935 Paris Salon, and would prove to be Delahaye's mainstay for the rest of its lifetime. The 135 was given a new chassis, designed by engineer Jean-Francois, with welded box-section side members and pressed cross mem....[continue reading]

This Delahaye Type 135 M bears one of three similar bodies that were perhaps designed for Henri Chapron by stylist Carlo Delaisse. Company documents describe it as 'a coupe with two small rear seats.' The chassis was sent to Chapron in May 1948, and ....[continue reading]

This 1948 Delahaye 135 M Cabriolet is one of six cars bodied by Faget-Varnet in Levallois-Perret, a small suburb of Paris. It is thought to be one of three similar cars that have survived and is one of two examples with the distinctive 'rostre' radia....[continue reading]