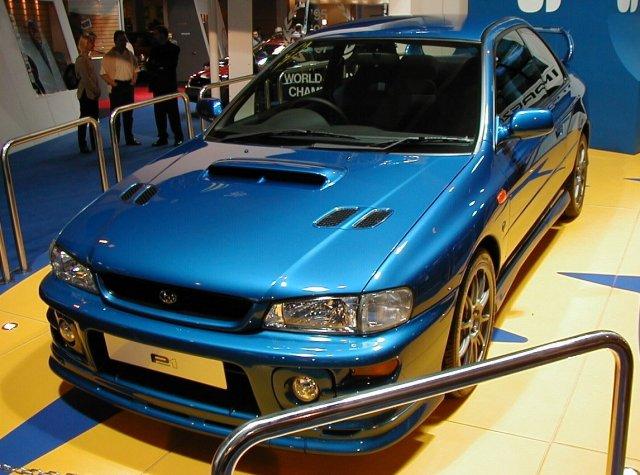 The 1999 London Motorshow saw the introduction of this, the Subaru Impreza P1. The P1 (short for Prodrive One) was especially developed for the ÚK market by a joint effort of Subura, Subaru Tecnica International (STi, Subaru's racing department) and Prodrive (runs the WRC campaign for Subaru). At its introduction it was the most extreme Impreza on the ÚK market and the only two door version of the Impreza.

At its launch a 500 car production run was planned but demand was so high that in the end a total of 1000 cars were built.Source - Subaru
Introduced by Subaru in November of 1992, the Impreza is a compact car that was offered in either front wheel or all wheel drive and featured sporty curves. The Impreza came in both four-door sedan/saloon versions or five-door station wagon/estate. More compact than the Legacy, the Impreza had a more enhanced high-performance driving and feeling of quality than its predecessor.

A first-generation Impreza, turbocharged was never received in the North American market.By Jessica Donaldson
Subaru introduced its Impreza Compact Car in 1993 and has since become a pinnacle of performance. The name 'Impreza' was derived from an Italian word 'impresa', meaning a feat or achievement. In Polish, the name 'Impreza' means to 'party', an 'event' or 'show'. In either language, the name is suitable. When the Impreza was first introduced in November of 1993, it was available in either front wheel drive or all wheel drive configuration. Two bodystyles were offered, a four-door sedan or five-door station wagon. The two-door coupe followed a few years later, in 1995. Trim levels included the LX, GL, and Sport. Adding to the vehicles versatility, the Impreza was offered with a variety of engines, including a 1.6, 1.8, and 2.0-liter engine. To boost performance further, a turbocharger and intercooler was available on the 2-liter engine. Horsepower for the forced-induction engine was an impressive 208. In the Japanese market, the output was even higher. Subaru Tecnica International (STi) was formed in 1988; their purpose was to specialize in the preparation of vehicles for rallies. In 1994, they were given the opportunity to create a version of the Impreza to bear the 'STi' nameplate. When introduced, it was only available in the Japanese Domestic Market (JDM) and European Domestic Market (EDM). These versions featured performance-tuned engines, transmission, and suspensions. Horsepower was raised above the normal WRX models, and could carry the vehicles from zero-to-sixty in just 4.9 seconds. Top speed was electronically limited at 122 mph. The European market had a slightly de-tuned version of the engine, though performance was still impressive. Additional steps were taken to prepare the vehicles for rally competition. The soundproofing material was reduced, the air conditioning removed, and void of many non-essential amenities. The overall weight of the vehicle was reduced significantly.
The Impreza received cosmetic changes in 1997 and the interior was redesigned in the following year. The design-inspiration for the interior was borrowed from the Forester.
Special edition Impreza's have been introduced throughout its production lifespan. These limited edition models are often tuned for greater performance or given unique cosmetic changes. The purpose is often to commemorate a racing success or to honor a racing legend. Editions include the Series McRae, 555, Catalunya, Terzo, RB5, P1, and 22B. A limited edition version of the Impreza Wagon was even offered for a short time, dubbed the CasaBlanca.The European market received a performance upgraded version of the Impreza in 1999 which featured an improved turbocharger and 4-pot calibers with larger disc brakes. The suspension was improved and the seating became more racer-oriented with bucket seats similar to the STi version.While the rest of the world was offered the turbocharger version of the Impreza, the North American market was left to sit on the side-lines. The turbocharger would not come across 'the pond' during the first generation of the Impreza. The Impreza was offered with the 1.8-liter engine with either front- or all-wheel drive. A 2.2-liter version of the engine became available in 1995. The FWD was later droped and all Subaru's became all-wheel drive as standard.Subaru was unsure of the performance market in North America, and thus, offered only basic engines. In 1998, the year the 1.8-liter engine was no longer available, Subaru decided to explore the possibilities of performance in the US. They offered a performance model dubbed the Impreza 2.5RS. The 2.5-liter DOHC naturally-aspirated engine produced 165 horsepower and had performance upgrades throughout the vehicle, including larger brakes and 16-inch five-spoke gold-colored wheels. Hood vents, rear spoiler, and a hood scoop helped segregate the styling from this 'special' model and its non-tuned sibling. In 2001, Subaru introduced a larger, more refined and improved, Impreza. For some, the changes were a step in the wrong direction, as the car grew in size and weight. It was tamer beast for the typical day-to-day driving conditions and the extra size meant it was more versatile. Also, the coupe model was no longer offered. The WRX version, for the United States, with its 2.0-liter turbocharged engine that cranked out nearly 230 horsepower became available the following year, in 2002. The US had to wait a long time to get the STi version, which did not enter into production for the States until 2004. To comply with safety and emission control laws in the United States, it was not the same thoroughbred racer as in other parts of the world. Still, it was a very impressive machine. In other markets, the STi was equipped with a twin-scroll turbocharger 2.0-liter engine. In the US, the STi was powered by a 2.5-liter EJ25 engine mated with a turbocharger.
In 2003, the Impreza was given a facelift, mainly due to the negative reaction by some media outlets. One of the more noticeable changes were to the headlamps, which became more square. Another redesign occurred in 2006 on all Impreza's, featuring changes to its headlights, taillights, and bumpers - among other changes.
The Third generation of the Impreza was introduced to the world at the 2007 New York Auto Show, ready for sale in 2008. It will be available as a four-door sedan and five-door hatchback.
By Daniel Vaughan | Jul 2007