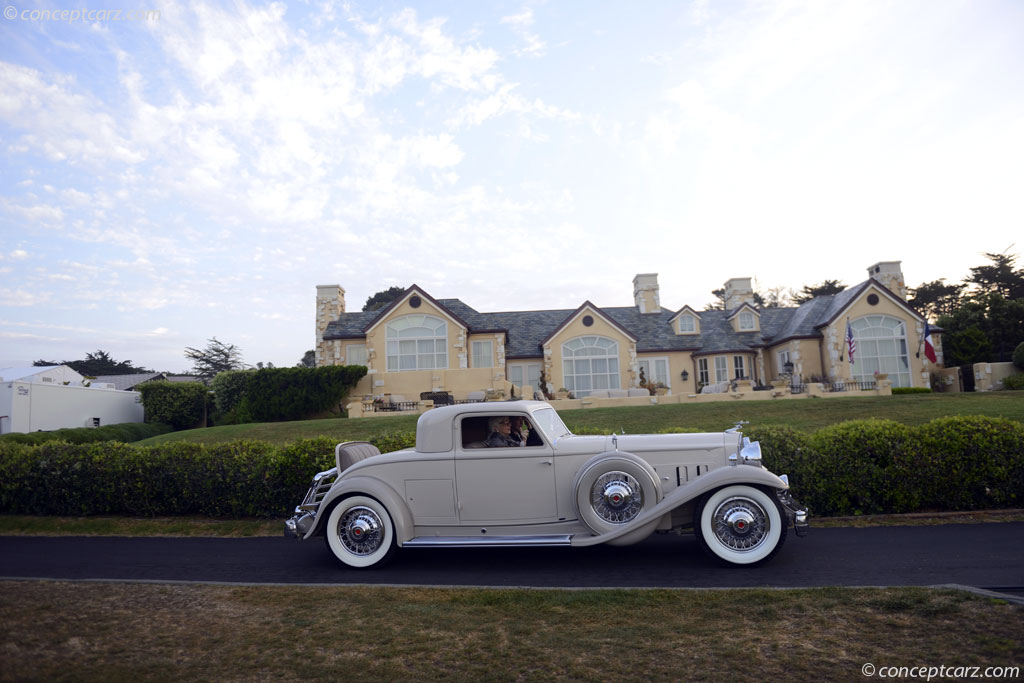 In 1932 the Packard Standard eight engine was updated with a redesigned manifold and fan. The compression ratio was increased to 6.0:1 and now produced 100 horsepower. A redesigned air cleanser improved both noise and vibration, and the fitting of new rubber engine mounts was accomplished by the driveshaft being jointed and rubber mounted. Both the components and the lengthened chassis were redesigned.

Created out of economic necessity, the Packard Light Eight was introduced in early 1932 and was the first newly designed Packard since 1923. It was also the first medium-priced Packard that was intended to sell in higher volume to help consumers in the luxury market ride out the Depression. Built with the same meticulous care as any Packard, the Light Eight sold for $500-$850 less than the Standard Eight.

Unfortunately though, despite its 'Light' name, the Light Eight used the same 320-cubic-inch engine that was in the Standard Eight, though it rode the shortest wheelbase, 127.5 inches. The Light Eight was sold in coupe roadster and sedan, four-door sedan, and rumble seat coupe.

All new Packard models for the 1949 model year featured a 'flow through fender'. The Packard station wagon was considered by many to be one of the most stylish wagons of the time period. For 1949 the Packard Standard Eight featured a fold down rear seat that made the vehicle quickly transform the station wagon from a functional utility vehicle into a passenger car.

The Packard Straight Eight was equipped with a three-speed manual transmission and was capable of producing 135 horsepower. Both the driver and the passengers enjoyed the bump-free smooth ride in the Standard Eight.

Between 1948 and 1950 only 3,865 Packard Station Sedans were ever produced. Today this vehicle is an extremely collectible piece of the Packard Motor Car Company legacy.

The 1950 Packard Standard Eight featured avante-garde styling along with strong, sturdy vertical wooden slats on the doors. The ‘woodie wagon' was formed by taking a six passenger sedan from the assembly line, then changing the roofline and trunk lid. Briggs Manufacturing Company transformed the once sedan into a complete station wagon. The Packard Standard Eight featured 288 cubic inch straight eight.By Jessica DonaldsonThe Packard Motor Company relied on making luxurious cars that were highly refined, fitted with luxurious coachwork, and powered by proven engineering. This belief had placed them among the elite in the auto industry during the early 1900s. As the world entered the Great Depression, the Packard Company was one of the few that managed to survive. In fact, they outsold all of their competitors combined. They had entered the Depression in excellent financial health and they emerged with strong financial footing. But the post-Depression era had them worried, as the number of potential buyers had dwindled as fortunes were lost. Production had dropped nearly half each year when compared with the previous, from 1929 to 1933. In response to the decline, Packard continued to make improvements each year.

In 1932, Packard introduced their Ninth Series. It featured many improvements that helped segregate it from other automakers in the industry. Improvements included a revised steering geometry which made steering smooth and easy. Braking was equally as easy thanks to the new driver-adjustable power-assisted braking system. The shifting action and clutch were improved making driving a very enjoyable activity. The driver's workload was eased even further with the spark advance and automatic choke.

By making these changes they attracted a growing segment of buyers and drivers - women.

The 1933 Packard's were called the Tenth Series cars as the company still refused to adopt the convention of the model year system which called for new cars to be introduced in September or October to coincide with the auto show schedules. The following year, they reluctantly joined with other manufacturers which resulted in a short run for the tenth series, lasting just seven months. The new Packard model line was introduced in the fall. Because of the seven-month production lifespan of the Tenth Series, very few were produced making them very rare in modern times.

The Tenth Series were given a new X-braced frame, dual coil ignition, and downdraft carburetors. The styling was updated with skirted fenders and a 'V'-shaped radiator shell. The interior featured upgraded trim and a new aircraft-inspired dash.

In 1936 Packard was producing their Fourteenth Series as the number thirteen had been skipped. It is believed that thirteen was not used due to superstitious reasons. The Fourteenth Series was the last year for Bijur lubrication, ride control, a semi-elliptic suspension, mechanical brakes, heavy vibration dampening bumpers, and the 384.4 cubic-inch straight-eight engine. It was also the last year for the option of wire or wood wheels.

In 1936 the fourteenth series received a new radiator which was installed at a five-degree angle. The Super 8 had a new sloped grille with chrome vertical bars which gave the vehicle a unique look and served as thermostatically controlled shutters that opened or closed based on engine heat. The headlight trim, fender styling, and hood vents saw minor changes. A new Delco-Remy ignition system was the new update for 1936 under the bonnet.

Packard entered The Great Depression head on, offering even more luxurious and expensive cars than they had done prior to the close of 1929. In 1932, they introduced their Twin Six which kept this name for a year before becoming the Packard Twelve. T....[continue reading]

With custom designed coachwork by Dietrich Incorporated of Detroit, Michigan, this Packard is considered one of the most stylish automobiles of the Classic Era and is particularly noted for its rakish chrome framed windshield design. This Packard is....[continue reading]

In 1932, Packard's lineup of 8-cylinder cars was joined by the re-introduction of a new V12 Twin Six, which was installed in a new chassis and offered with a staggering 21 different body styles, including six designs by Raymond Dietrich. ....[continue reading]

In Warren, Ohio, the Packard Motor Car Company would be formed by James Packard, his brother William and a partner George Lewis Weiss. The company had started as the result of a challenge. And like everything in life, timing was everything.....[continue reading]

This is one of two 1932 Stationary Coupes by Dietrich known to survive, and it has been in the possession of its current owner for forty years. The Model 904 was offered in five custom bodies including a Convertible Coupe, Sport Phaeton, Convertible ....[continue reading]

Packard was the leading luxury automobile marque at the start of the Classic era. It was one of the oldest car companies in America, with the first Packard being built in 1899. The company began life as the Ohio Automobile Company based in Warren, Oh....[continue reading]