Carlo Abarth founded his own company in 1949. His work gradually stabilized in four different areas; modifications of production cars (usually Fiats but also with others, mostly Simca), exhaust pipes (and the other accessories), one-off cars for record breaking and sports car design and production.Fiat began producing the 850 and later supplied Abarth with incomplete vehicles. It was left up to Abarth to fit the car with brakes, exhaust pipes, carburetors, and crankshafts. Thus, Abarth was able to produce highly modified vehicles at very reasonable prices.The Fiat Abarth was based on a Fiat 600 which came with a water-cooled, four-cylinder, 600cc engine delivering 28 horsepower. Abarth gradually modified the car in several different iterations including the 750 TC, the 850 TC and the 1000 TC. The rear-engined car often had its rear deck open to help with cooling. What was later learned was that the open rear deck offered the car a higher top speed.
The 1000TC was the most potent evolution and was raced successfully up to 1970. The first 1000 Berlinas made their appearance in 1962 and used a version of the Fiat 600D engine. In 1964, the racing version was replaced by the Berlina Corsa. These versions had a front-mounted radiator that set in the front, between the bumper bars. The engine offered 76 horsepower and had a top speed of 185 km/h.
A later radiator was fitted in 1965 which eliminated the need for a fan to cool the rear unit. A fuel filler cap was located in the center of the front hood and the window wipers had a new linkage.In 1966, it received a larger front radiator shroud that traversed the entire width of the car. This particular example has been used in vintage competition since being purchased by its current caretaker. It produces about 85 horsepower. The car has disc brakes and adjustable shocks.
By Daniel Vaughan | Jul 2015
Since 1899 the Fiat name has been a sign of creativity, versatility and practicality. The history of Fiat began at the dawn of Italian Industrialision, and has continued through the decades to keep a sense of distinction upon every vehicle produced. Released in 1964, the Fiat 850 was a small rear-engine rear wheel drive vehicle that was designed in the tradition of the Renault Dauphine. A total of 1,780,000 vehicles were produced before it was taken off the market in 1872.
The internal Fiat codename for the 850 project was 100G (the G stood for the Italian word Grande).
The beginning of the economic boom began in 1958 when production began to grow enormously for both automobiles and farm machinery. Fiat set up new manufacturing plants abroad.
In Italy this period became the driving force of the auto sector of the economy. During this period the trend showed the leap from one car for every 96 individuals, to one for every 28. At this same time Fiat was establishing numerous factories in southern Italy.To cope with the oil crisis during those years, Fiat followed the trend toward increased automation of the manufacturing process.A new popular utilitarian car, the Fiat 850 was a rear engined rear wheel drive vehicle. It was equipped with 850 903 cc engines that were inline 4 cylinders. Available in two versions, the 850 came in either ‘normale' (standard) with 34 HP or ‘super' with 37 HP. The 850 was capable of a maximum speed of 125 km/h.Several body styles were featured alongside the 850 that carried similar technical components and enhanced the 850 range.
The Fiat Coupe was a pretty little 4-seater coupe that was based on the 850 saloon. Available in two engine sizes, 843cc and 903cc, both engines were fitted at the rear and gave respectable performance.
Introduced in 1965 on the Geneva Motor Show, the 843 cm³ engine was tuned to produce 47 hp. At the present time, the maximum speed was 135 km/h.The Spyder convertible was presented at the same time as the Coupe. With its own unique Bertone body style that was based on the 850 saloon running gear, a total of 14,0000 were produced until 1972. Completely built by the design studio Bertone, the design was sketched and created by the same company.The sporty two-seater Spider shared the original 843 cm³ engine that was able to produce 49 HP. The Spyder could reach a top speed of 145 km/h. Made of fabric, the folding roof section could be stowed away completely under a rear flap.Marketed in the U.S., to meet emissions regulations the Sedan, Coupe and Spider had a reduced capacity of 817 cm³ engine.Launched in 1968, the Fiat 850 Special was a revised and newly redesigned prototype of the 850 sedan.
The Fiat 850 Special shared the same engine with the Coupe. Available on this new model was improved trim, sport steering wheel and front disc brakes.The Special also had a 25% increase in power, 13' wheels and disc brakes.Considered classics today, the success models Coupe and Spider were once again revised in 1968 and given a stronger engine withh 52 HP and 903 cm³. They received the new name Sport Spider and Sport Coupe. Both vehicles received sport seats, round speedomter, and a sport steering wheel.Coupes ended production in 1971, and the Sedan was ended a year later. The Spiders lasted one more year before also ceasing production.In Spain, the Fiat 850 was marketed under the name Seat 850 in all variations including a four-door variant. The 850 was also produced in Lovech, Bulgaria under the name Oirin-Fiat.Two years after the release of the Fiat 850, Giovanni Agnelli, became President of the company. Agnelli was the grandson of the founder, who shared the same name.By Jessica Donaldson
Concepts by Fiat 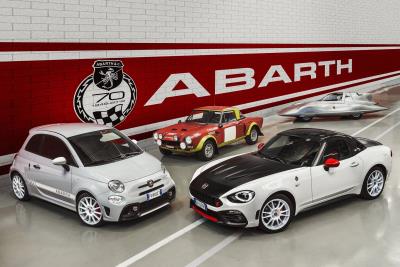 The 2018 Fiat Abarth is an aural delight. Theres that fabulous exhaust note thats synonymous with Abarth. In sport mode, each rapid automatic downshift is accompanied by a throttle blip, evoking the image of Al Cosentino in his FAZA Fiat... 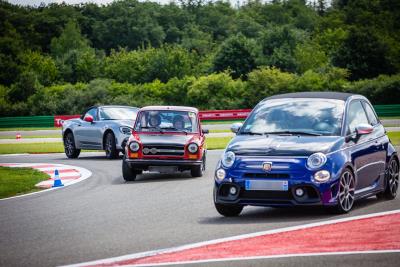 The scorpion badge brought together over 4,000 Abarth fans at seven circuits across Europe Over 3,000 test drives, on the road and on the track, in the iconic new Abarth 595 range and 124 spider This years events included rally experiences, laps... 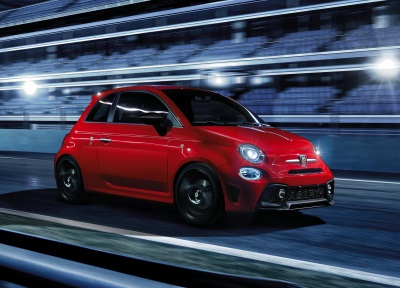 Star of the event, the new Pista version of the iconic Abarth 595. It will be joined on the stand by the numbered and limited edition Abarth 695 Yamaha XSR and the Yamaha XSR900 Abarth motorbike, which springs from the partnership between Abarth an...