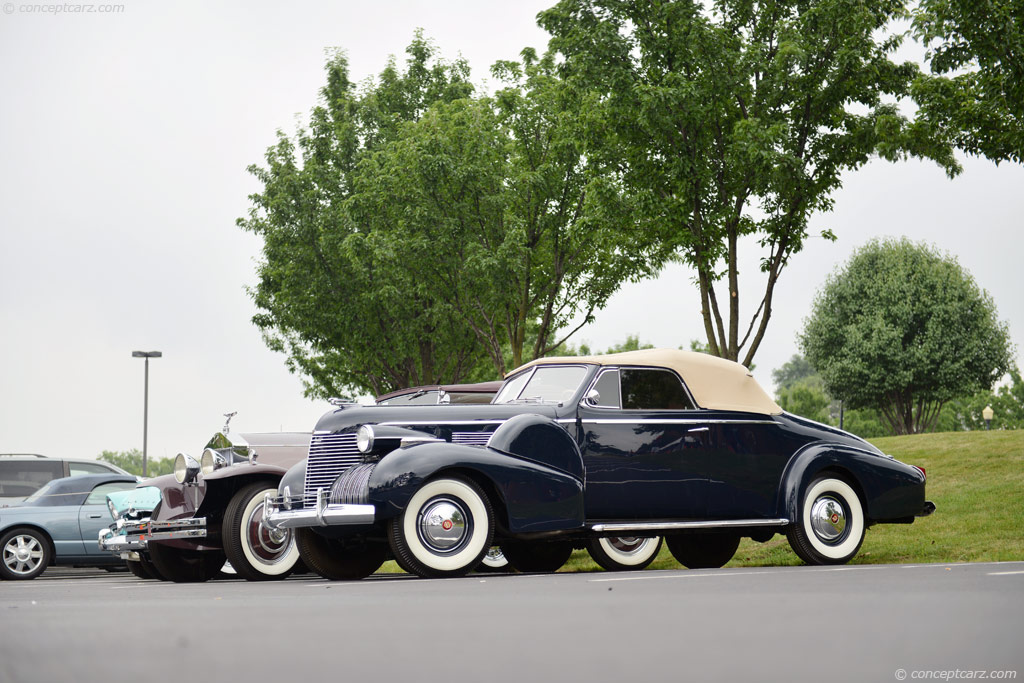 The 1940 model year was the final year of the true pre-war design and marked a turning point for Cadillac. Strongly influenced by Bill Mitchell's Series 60 Special of 1938, the V-8 models wore less chrome, low-set headlamps, and modern pontoon fenders. The grille received slight revisions that included fewer bars of more substantial design and the introduction of a pair of louver bars on the side panels of the hood. Standard equipment included sealed beam headlights and turning indicators; running boards were offered as no cost options, and the engine inlet manifold was set at a five degree angle to give more balanced fuel supply and to cancel its rearward tilt. This was also the final year of the V-16 models which shared its Fleetwood bodies with the top-of-the-line eight-cylinder series, the 75. After the V-16 was discontinued, it was no longer feasible to continue the wide range of bodies.

The Series 75 was powered by an overhead V-8 engine with a 346 cubic-inch displacement and offered 140 horsepower. They had a three-speed synchromesh manual transmission, independent coil-spring front suspension, Hotchkiss semi-floating rear axle, and four-wheel hydraulic drum brakes.
by Daniel Vaughan | Aug 2019

The Cadillac Series 75 was the marques flagship V8 from 1936 onwards, though the lower priced series easily outsold it. Production of the full-size V8 powered Cadillacs would continue from the 1930s through the 1950s. It served as a replacement for the outgoing 355-D and was introduced around the same time as the less-expensive Series 60 model. Outwardly, the Series 80, including the 85, were....
Continue Reading >>

This 1940 Cadillac Series 40-75 V8 Fleetwood Town Car one of 53 produced in 1940, and it continued the 'projectile' or 'torpedo' body-styling introduced in the prior year. The grilles were some of the most distinguishable differences over the prior y....[continue reading]

This 1940 Cadillac Convertible Coupe, Series 75, was offered for sale at the 2007 RM Auctions held at Meadow Brook. This car is powered by a L-head V8 engine that is mounted at a ninety-degree angle and has a displacement size of 346 cubic-inches. ....[continue reading]

This beautiful automobile was purchased as a Christmas present by Mr. Lamott duPont Copeland for his wife Pamela in 1939. This was very appropriate being that the duPont family were the largest stockholders in General Motors, at the time. Mr. Copel....[continue reading]

This unusual car is Style #7553 from the 75 Series of pre-war Cadillacs, and it is a seven passenger Town Car, with an exposed cockpit for the chauffeur. This blue car with matching blue interior is one of only 14 built, with a list price of $5115 b....[continue reading]

This 1940 Cadillac 75 Series Town Car is fitted with custom coachwork by Inskip. This car was built for the legendary singer and band leader Vaughn Monroe as the Racing with the Moon car. The story is told that his mistress was the actual person to h....[continue reading]

It is believed that just 12 examples of the five-passenger Fleetwood coupe model 7557-B were built in 1940. This was 11 fewer examples than in the prior year. This model included a rear bench seat, built in fewer numbers, and commanded a slightly hig....[continue reading]

Cadillac in 1940, released only three of the 75 Series 75 town car chassis produced to outside coachbuilders. Two went to Derham, the first of which was this town landau limousine, custom built for Mrs. Jesse Woolworth Donahue; the second was built f....[continue reading]

1940 was a turning point for Cadillac as it was the final year of true pre-war design, albeit strongly influenced by Bill Mitchell's Series 60 Special of 1938. This was also the final year for the Cadillac V-16, which shared its Fleetwood bodies with....[continue reading]

In December of 1939, Elroy J. Kulas placed an order for the last custom-built Brunn Town Car. It was given a special cowl and all-aluminum bodywork. The handmade cowl incorporated a steeply raked windshield combined with the elimination of vent windo....[continue reading]

The early history of this Cadillac is not known. It is believed to have been once part of a large US-based collection. It is also thought to be one of the very few Convertible Coupes produced for model year 1940. Believed to have been restored in the....[continue reading]

Delivered new on January 2nd of 1940 to the Cadillac Auto Company of Boston, Mass., this car, including delivery to Boston, was $2,418. This 75 Series Fleetwood bodied example was ordered with the Cadillac paint code of Knickerbocker Grey and Vincenn....[continue reading]