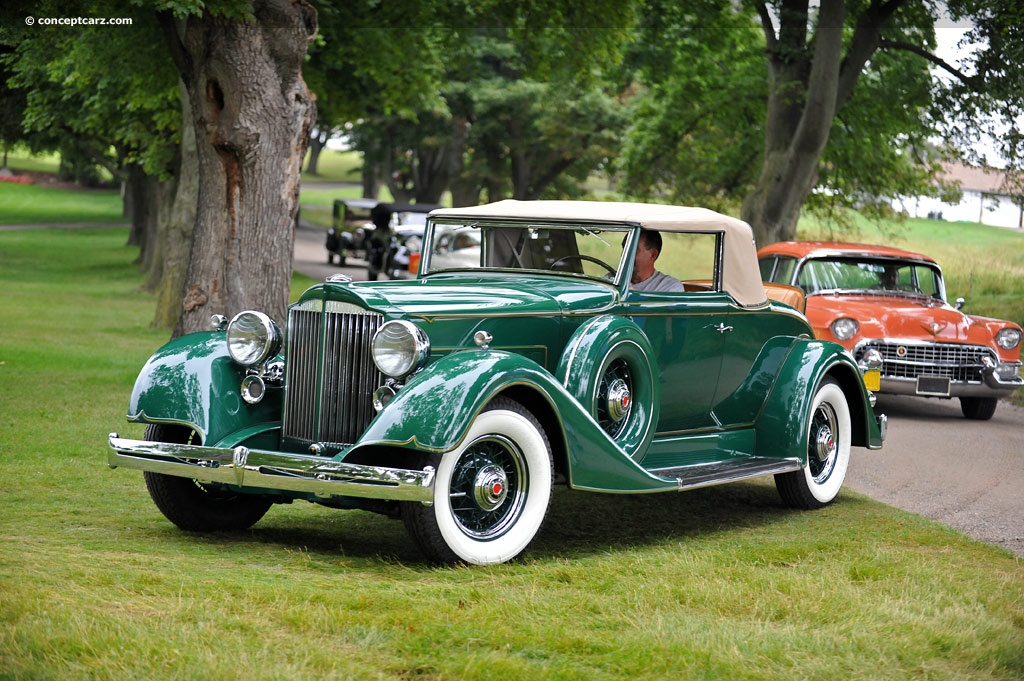 The Great Depression was a devastating time and it dwindled the number of elite clientele capable of buying the luxurious and exclusive Packard automobile. Packard offered a profusion of models, body styles, and optional accessories, which helped them finish the year with 42.7% of the luxury car market. Lincoln and Cadillac were in worse shape but still in business, unlike Peerless, and Marmon who succumbed to the Recession and called it quits in 1933. Pierce-Arrow was also near its end.

Packard's production amounted to only 8,000 cars that were spread out over five different chassis and three different engines. While working for Murray Corporation subsidiary Dietrich, Inc. in the late twenties, Raymond Dietrich had created the basic lines of Packard's cataloged and custom bodies. They were conservatively elegant and sporty and outfitted with luxury, performance, and inherent quality. Ed Macauley was appointed as Packard's styling director in 1932 by his father Alvan Macauley, Packard's President. Alexis de Sakhnoffsky joined Packard as a part-time consultant through the early thirties, contributing to the design and flow of the vehicles. The designs were implemented by Werner Gubitz.

A few Packard body's continued to receive coachwork from independent coachbuilders, however, the economy and extensive catalog of Packard designs meant most Packard coachwork was done in its own facilities. The Packard designs included their traditional buttressed grille shell, which since 1932 was vee-shaped with vertical blinds. There were veed headlight lenses and dart-shaped shoulder molding created by Hibbard & Darrin. The new fender contours curved down nearly to the front bumper and were heavier than previous ones. Other changes were seen on the door handles, radiator caps, running boards, finer upholstery, and a fuel filler that was integrated into the left taillamp. Mechanical improvements included a new oil cooler and an oil filter.

The 1934 model Packards were the final models with traditional open fenders. Placing emphasis on ride control and silencing, the chassis was fitted with adjustable Ride Control suspension and Bijur automatic lubrication.

The Eleventh Series Packard Eight was offered with no less than thirteen standard bodies. The most popular body style was closed sedans.

The 1100 Series rested on a 129.5-inch wheelbase platform and offered as a five-passenger sedan. The 1102 was 141.25 inches and available as a 7-passenger sedan or sedan limousine. The 1101 rested on a 136.25-inch wheelbase and had ten available body styles. Power was from a 319.2 cubic-inch L-head straight-eight engine fitted with a Stromberg carburetor and offered 120 horsepower. The engine was mated to a three-speed selective synchromesh gearbox with a single plate clutch. Mechanical brakes were located on all wheels.

The Eleventh Series cars were introduced on August 21st of 1933, but they were considered 1934 cars and would remain in production through the following August when the twelfth series cars of 1935 were introduced. The model lineup consisted of the Eight, Super Eight, and Twelve. This gave customers a total of 41 different combinations of wheelbases, body styles, and engines, along with 17 'catalog custom' bodies by coachbuilder LeBaron and Dietrich.

A wealthy client had once asked Mr. Packard about the reliability of his automobiles, his response was, 'ask the man who owns one,' a phrase that would follow the brand for many years to come. The Packard Company was proud of their product and encouraged prospective buyers to ask for their hometown Packard dealers 'Who's Who' book. The lists included local residents who purchased Packards and allowed prospective buyers to contact them for a candid assessment.
by Daniel Vaughan | Nov 2018

In 1923, Packard began using a 'series' number to designate each year's model line, a practice it continued into the 1950s. This 1934 Standard Coupe was introduced in 1931 and was powered by a 320-cubic-inch inline 8-cylinder engine producing 120 ho....[continue reading]

Sold New in Beverly Hills
On October 13, 1902 the Packard Motor Car Company was established to succeed the Ohio Automobile Company as Packard's builder. The new company moved to Detroit the following year.....[continue reading]

The Model Eight Packard was a valuable and long-produced model for the Packard marque, though it carried various names throughout its production lifespan. By 1933 the Standard Eight was renamed to the Eight. It received a boost in horsepower to 120....[continue reading]

The silver and red Packard shown with chassis number 378583 was offered for sale at the 2006 Worldwide Group Auction held on Hilton Head Island. It was expected to fetch between $175,000-$225,000. Its beautiful body sits atop a 142-inch wheelbase w....[continue reading]

The history of this 1934 Packard Standard B Roadster, according to one of its previous owners, is quite interesting. It seems that this car was a 'peace offering' to a wife from her husband, who had been unfaithful. She accepted the car in place of....[continue reading]

In the luxury car market, Packard accounted for 42.7% of the total sales. Cadillac and Lincoln were even worse off, but better than Marmon and Peerless as they called it quits in 1933. Pierce-Arrow was on its way to going out of business. ....[continue reading]

This 1934 Packard 1101 Eight Phaeton is the recipient of a recent restoration and is finished in deep blue with a black Hartz cloth top and blue interior.....[continue reading]

For 1934, the Eight received a slight face-lift, but was quite similar to its 1933 counterpart. The wheelbase was lengthened to 136¼ inches. Ten different body styles were available including this convertible coupe. The Eight series was powered by Pa....[continue reading]

This Packard Eight Dual-Cowl Sport Phaeton is one of just 40 built. There were ten body styles available on the Eleventh Series Packard Model 1101, and all were on the intermediate 136.25-inch wheelbase. ....[continue reading]

The Packard 1101 was built on a 136.25-inch wheelbase which offered plenty of room for this 2/4 person coupe. The car cost its original owner $2,550 at base, and the accessories it wears of twin side mounts with covers, chrome wheel trims, side mirro....[continue reading]

Packard introduced the Series 1101 Eight in August of 1933. Less than 300 examples were produced and only about ten percent survive today. Priced at $2,580 when new, this 11th series Packard example featured a 136-inch wheelbase, adjustable vacuum-as....[continue reading]

This 1934 Packard Convertible Sedan was the fifth car delivered from the factory. It has an original brass Dietrich body tag under the passenger seat. In this era, the convertible sedan and convertible Victoria bodies were built by Dietrich on contra....[continue reading]

This Series 1101 Convertible Victoria was delivered by W.H. Collins Inc., the Hollywood dealer, on November 18, 1933. Though undocumented, it is believed that this car was owned new by Academy Award-winning, Canadian-American actress Marie Dressler. ....[continue reading]

Packard abandoned all reason in 1934 with a total overkill of new models. It offered no fewer than 55 body styles including catalog customs from Dietrich and LeBaron. Despite the proliferation of models, Packard produced an even 8,000 cars for 1934, ....[continue reading]

In the mid-1930s, Packard was the nation's leading luxury car, and one of their cars was prominently placed in the inaugural parade on Pennsylvania Avenue in 1933, for the new president. The new Tenth Series had debuted in January and featured as the....[continue reading]

This 11th series production model was completed at the Detroit, Michigan Packard factory in August of 1934. It left the factory as a Type 719 Coupe Roadster and delivered new through Fonda Motor Car Company, presumably based in Connecticut. During th....[continue reading]

This Packard is powered by a 320 cubic-inch straight eight-cylinder engine producing 120 horsepower. Those horses spin a three-speed manual gearbox with a floor mounted shift. The car weighs in at 4,430 pounds and originally sold for $2,580. The curr....[continue reading]

This Packard 1101 Eight is a 2/4-passenger Model 719 Coupe-Roadster, complete with a rumble seat. The car was delivered new to its first owner in June 1934 by the Highland Motor Co. in Glen Cove, New York. It eventually moved to Auburn, California, a....[continue reading]

By 1934, Packard had 43% of the luxury car market in the United States. Their Eight Model had 13 variations, with the convertible sedan being priced near the top of the Eight hierarchy at $3,355. This particular example, carrying body designation 723....[continue reading]

This is the only known Packard Woody Wagon to be built in 1934.....[continue reading]

This Packard Eight 1101 Convertible Sedan was original purchased by Paul Whiteman. It passed through three owners in South Carolina before coming into the care of James Nelson of Tryon, North Carolina, in 1953 for $125. It remained with Mr. Nelson un....[continue reading]

For many, the 1934-model-year Packards, which the factory dubbed the Eleventh Series, represent the height of the company's pre-war efforts. They were the final models with traditional open fenders, albeit gently skirted; and the upright radiator she....[continue reading]