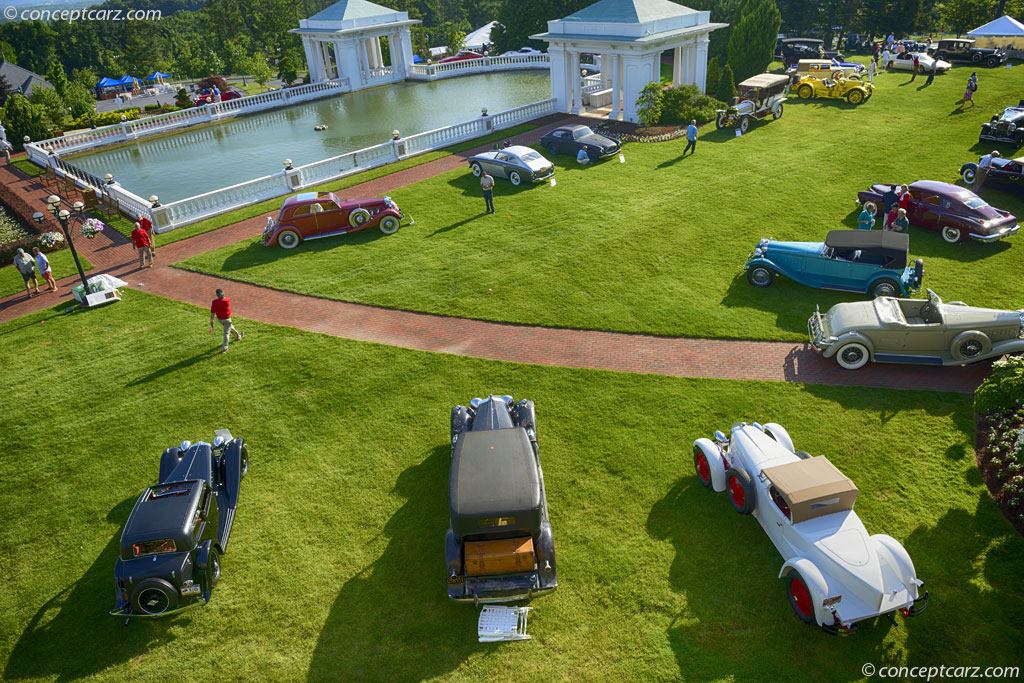 Harry C. Stutz was born in 1876. He grew up on the family farm where he often helped repair their farm equipment. This led to a fascination with engines and in 1897 he built his first car; soon after he began designing and creating engines. The Stutz Company, based in Indianapolis, Indiana, introduced its first production vehicle in 1911. The vehicle, after only five months of design and build, was immediately entered in the inaugural Indianapolis 500 mile race where it captured an 11th place finish. Not bad for its first vehicle and first race. Throughout the company's life span, it would endure good and bad times. The Stutz Company was in production during World War I and the Great Depression, both responsible for negatively affecting Industry.
Stutz will be forever remembered for their Bearcat model, a vehicle produced until 1925. This pure-bred race car had an aggressive and masculine stance; the interior was void of luxury and amenities. With its high revving straight 8-cylinder overhead camshaft engine and lightweight construction, the vehicle was poised to compete in national and international competition.

In 1919, Harry Stutz was forced by stockholders to leave his company. In 1922, Charles Schwab was given control of the company. In 1925, Schwab gave control of the company to Frederick Moskovics. Moskovic planned to revitalize the company by shifting the priorities from racing to producing luxurious automobiles. This did not mean that the company was to abandon its racing heritage, rather Moskovics wanted to expand its racing prowess by entering it in International competition. The 24 Hours of Le Mans is a grueling endurance battle that tests stamina, speed, and durability. In 1928 a Stutz Series BB Black Hawk Speedster, driven by Edouard Brisson and Robert Bloch, was entered in the French LeMans race. The vehicle did well, leading for most of the race. Halfway through the 22nd hour, the gearbox broke on the Stutz and a Bentley 4.5-liter was able to secure a first-place finish. The Stutz was second, the best an American car had ever placed in this prestigious race.

In 1929, the Stutz Company decided to increase their chances of victory by entering more than one vehicle into the Le Mans race. The vehicles were designed and prepared especially for the race. Gordon Buehrig was tasked with designing the bodies for the 2-seater sportscars. A modified 5.5-liter straight 8-cylinder with a supercharger was placed in the front and powered the rear wheels. Three vehicles entered by Stutz Paris, Colonel Warwick Wright, and Charles Weymann were anxiously anticipating a repeat of the prior year's success or possibly an overall victory. Sadly, only one vehicle would finish. Behind a fleet of Bentley's was the Stutz followed by a Chrysler 75. With a fifth-place finish, the Stutz cars were no match for the powerful and agile Bentley Speed Six models.

In the early part of 1929, Moskovics resigned and Edgar Gorrell assumed the duties of the president. Many manufacturers were developing multi-cylinder cars which attracted a larger market share of the already small luxury car market. The Stutz Company was not in a financial position to develop an engine of this caliber. Instead, Stutz embarked on developing an inline eight-cylinder engine with single overhead cams. The result was the SV16, representing the side-valve 16 meaning that one exhaust and one intake valve per cylinder was allocated for the eight cylinders. By using the name SV16, it gave the vehicle an allure of equal capacity to other nameplates such as the Cadillac and Marmon V16. The SV-16 came equipped with a windshield safety glass and hydrostatic brakes. The chassis sat lower than most of the competition giving it an advantage through turns. During its production run, around 100 examples were produced.

Following on the heels of the SV16 was the DV-32. The engine featured updraft Schebler carburetors and four valves per cylinder equaling 32 valves and dual overhead camshafts. The power-plant was capable of producing 156 horsepower. The vehicle sat atop of a 145-inch wheelbase and outfitted with Stutz 8 hubcaps. At $6,400 these vehicles were extremely expensive at the time.

The Stutz 8 was produced from 1926 through 1935. The engine produced just over 90 horsepower. Within a few years, horsepower had been increased to over 115.

In 1928, the Blackhawk series was introduced. These sports cars were affordable, competitive, and compact; outfitted with a powerful engine.

The demise on the race track would slowly transcend to the market place. For all of 1930, there were less than 1500 cars produced. Sales declined even more in the following years and in 1934, after only six Stutz cars produced, the factory closed its doors. This is not to suggest the racing results were solely responsible for the company's woes. The Great Depression crippled and destroyed many auto manufacturers at this time. Competition in design and technology was ever-present and the dependable, mass-produced, low-cost automobile manufacturers were in the best positions to come out on top. The Stutz Company had an impressive racing heritage and its automobiles are legendary. The Stutz name is respected by many including those overseas.

Originally called the Ideal Motor Car Company, Stutz built cars in Indianapolis beginning in 1911 and soon grew famous for its high performance roadsters. This Coupe was completed and loaded for shipment from the Stutz factory in Indianapolis on June....[continue reading]

Stutz was a serious competitor in many racing events during the close of the 1920s. They competed at LeMans in 1928 and nearly emerged victorious. They raced in timed speed trials and in 1928, they proved they were the fastest American cars in this....[continue reading]

One of the legendary marques of American automotive history is the Stutz, built in Indianapolis, Indiana from 1911 to 1935. The company made its reputation at the Indianapolis '500.'....[continue reading]

The chassis on the new Stutz Vertical Eight had a central lubrication system and underslung worm drive which gave it a low appearance and allowed for low and sensuous bodies. After winning many races, the Black Hawk Speedster was named the 1927 AAA S....[continue reading]

The Stutz Company was revitalized in 1923 when it was joined by industry veteran Frederick E. Moskovics and the introduction of its new Vertical Eight, also known as the Series AA, for 1926. The new single overhead camshaft eight-cylinder engine was ....[continue reading]

This 1928 Stutz wears a custom Weymann body built in a similar fashion of early airplanes. The Zapon leather-like fabric was stretched over a wooden frame in an effort to reduce weight, eliminate squeaks and rattles, and to offer better performance. ....[continue reading]

This car is a 1928 Stutz 'bb' Blackhawk speedster, with four-passenger capability. This example is one of three known to exist. The car has a 289 cubic-inch engine developing 110 horsepower. It was from the Ruger Collection (Ruger Firearms).....[continue reading]

This car was a special order and is the only known Fleetwood bodied Stutz. It is powered by a big overhead 300 cubic-inch, inline 8 engine that produced 95 horsepower. It was designated as America's fastest stock car. The hydraulic brakes were a feat....[continue reading]

Stutz commenced production in 1911, quickly building a reputation for fast sport cars with their famous Bearcat models. In 1912, they adopted the advertising slogan: 'The car that made good in a day,' capitalizing on their excellent performance at th....[continue reading]

Mention the word Stutz, and one immediately associates the name with the legendary Bearcat. Rare is a manufacturer so indelibly linked to one model. Ironically, neither the first Stutz in 1911, nor the last in 1935, would be a Bearcat. However, Harry....[continue reading]

This Stutz Model BB Four-Passenger Speedster was commissioned by the government of Finland and wears a coachbuilt body by Philips Custom Body Co. of Warren, Ohio. Philips would build 25 convertible coupes and closed sedans that year. This is the only....[continue reading]