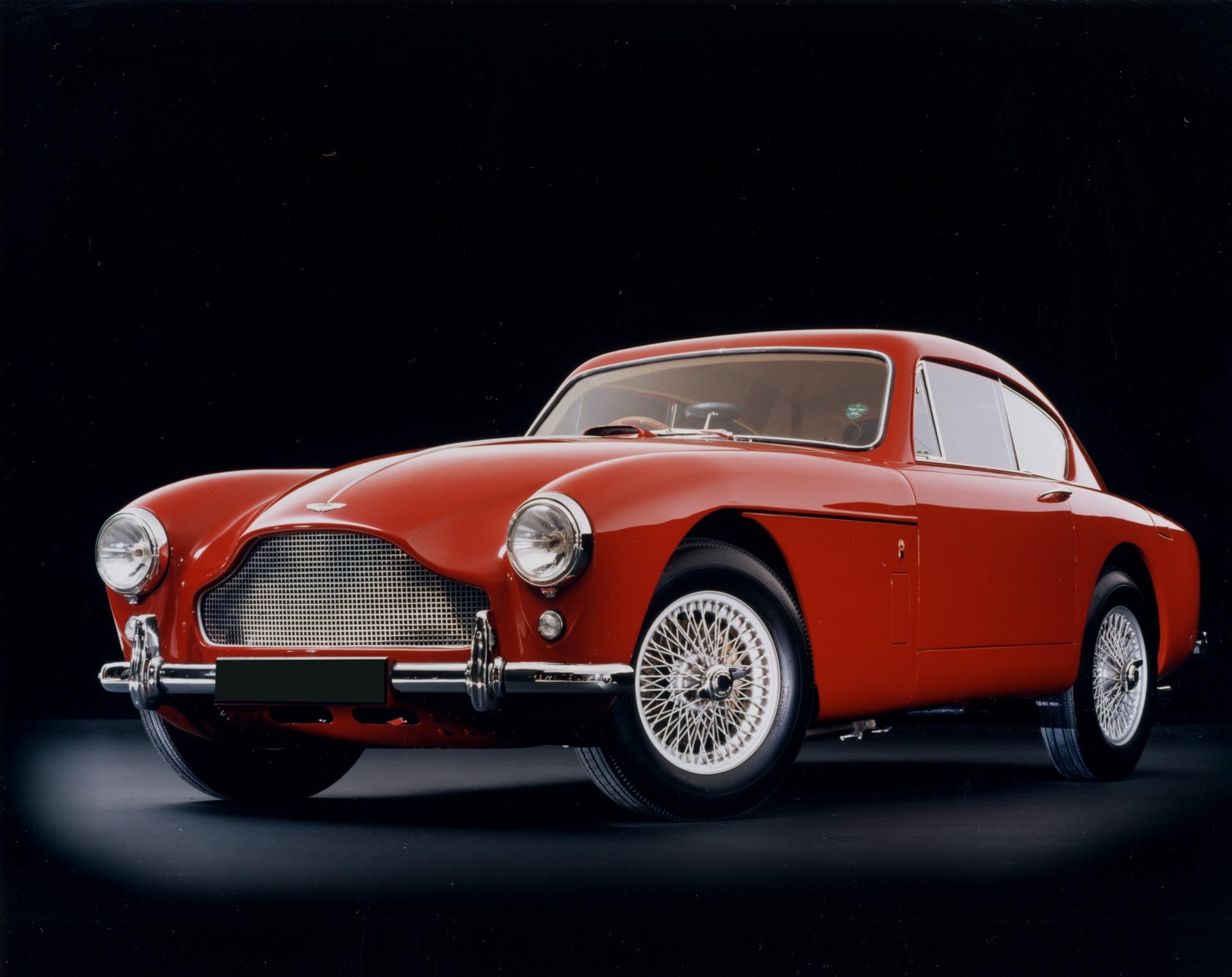 The DB name came from the name David Brown (later Sir David Brown), an individual who had purchased the Aston Martin Company.
The DB series was built from 1950 through 1953 with only 411 examples being produced. Power was supplied by a W.O. Bentely designed Lagonda six-cylinder engine that was capable of producing 116 bhp and could propel the car to a top speed of 117 mph. The zero-to-sixty time was around 11.2 seconds. The Vantage series received 125 bhp.

The two-seater DB2's were available in two body styles, the coupe and drophead.

In 1953, the DB2/4 MK1 became available. This series featured a four seater, 2+2, saloon or drop head body style. The design went through minor changes with the most notable changes appearing in the front of the vehicle. The early versions of the vehicle featured a hatchback rear window.

The DB2/4 MK1's were originally powered by a 2.6 liter Vantage engine but was later replaced with a 3-liter, 140 bhp engine that was not only more powerful, it was heavier.

The DB2/4 MK2 series began in 1995 and would continue until 1957. During this time frame, 199 examples were produced. There were two body styles available; a coupe and a convertible. Both had 2 doors and 4 seats. A hardtop style saloon was also available although less than 35 were produced.

Most MK2's were mechanically similar to the MK1's, however, later version received engine modifications that included larger valves and different cam shafts. The horsepower output was increased to 165.

In 1957, Aston Martin introduced the final derivation of the DB2 series, the DB MK III. It would continue production until 1959 and amass a production total of 551 units. It was offered in Saloon or Convertible body styles and consisted of 4 seats. The base engine produced 162 horsepower, propelling the vehicle to a top speed of 120 mph.
By Daniel Vaughan | Mar 2006The Aston Martin DB2 was introduced to the public at the New York Motor Show. This was not the vehicle's first appearance as it had been raced at the grueling 24 Hours of LeMans where one of the drivers, Pierre Marechal, had been involved in a fatal accident. The DB2 was designed by Frank Freeley and configured as a two-seater touring vehicle. It was Aston Martin's first real production vehicle. The name was derived from the initials of the company's founder, David Brown. The production designs were very similar to the vehicles raced at LeMans, offering LeMans performance and touring comfort. Power was supplied by a twin-cam, W.O. Bentley designed Lagonda six-cylinder engine capable of producing 115 horsepower. With the 'Vantage' option that became available in 1951, the output increased to 125 horsepower, thanks in part to SU HV6 carburetors and high compression pistons.

In 1957 Aston Martin introduced the MK III. It was available as a coupe or convertible, both were two-door and capable of seating four individuals. This was the final installment of the DB2 family. It received several mechanical updates including Girling disc brakes, hydraulic clutch, automatic, and overdrive transmission options. This marked the first time that Aston Martin offered disc brakes as standard equipment on a vehicle. Al-Fin drum brakes were used in the rear. Aesthetically, it was similar to its predecessors but had received modifications to the front, including the DB3S grille. The modifications were enough to make the MKIII the most beautiful of all the DB2 models.

During the DB MK III lifespan lasting from 1957 through 1959, 551 examples were produced.
By Daniel Vaughan | Mar 2006The first Aston Martin was built in 1913 by London Singer dealers Robert Bamford and Lionel Martin. It was comprised of a Coventry Simplex engine and an Isotta Fraschini chassis. They were later joined by Count Louis Zborowski, who provided finical backing and was an avid racer. Under the patronage of Augustus Bertelli, the legacy of Aston Martin continued to grow in motorsports throughout the years. Motorsports were expensive, and by 1925 the company had entered into receivership, a trend common to the company throughout its lifetime.

A.C. Bertelli left Aston Martin in 1937, soon after the arrival of the new 2-liter car. This car was a shift in the way the company did business, as it was less sporty and marketed more towards civilized driving. In 1939 the company introduced a prototype designed by Claude Hill dubbed the Atom. It was comprised of a steel spaceframe chassis and given a four-door sedan body. When gearbox manufacturer David Brown was given the opportunity to drive the Atom in 1947, he decided to buy the company.

The Atom was a slightly odd-looking vehicle but possessed many modern features which would become the starting point for many new models in the years to come. Aston Martins push-rod engines, however, were deemed inadequate by Mr. Brown. Rather than creating a new engine design he simply purchased Lagonda and the rights to produce the W.O. Bentley designed twin-cam six-cylinder engine. This engine would become the basis for Aston Martin engines in the years to come and would give the company many podium finishes.

A six-cylinder Aston Martin racer made its racing debut at the first 24 Hours of LeMans in the post-War era. The production version was shown in April of 1950 at the New York Auto Show. It was called the DB2 and powered by a 2.6-liter Lagonda six clothed in a two-door coupe body designed by Frank Freely. The design was well received by the public and it appeared as though financial stability would soon become part of the company's lineage. The small factory struggled to keep pace with the demand for the new coupe as more interest was created by the Works DB2s as they scored several important victories including first and second in class at LeMans in 1950.

The first fifty cars created had large grilles that were later removed. In 1951, the Vantage model was introduced which was an upgraded version of the DB2. The DB3 became the company's racing entrant while the DB2 was their road-going model.

The two-seater DB2's first major update came in 1953 when it was given two rear seats and a name change to DB2/4. This, as was the DB2, was available in either fixed or drop head configuration. Several chassis were delivered to custom coachbuilders to be fitted with unique creations orchestrated by customer's desires and demands. Among them were the 'Wacky' Arnolt commissioned Bertone Spiders which were very attractive and equally as popular.

The fourth and final update to the DB2/4 was the MKIII, also known as the DB MK III, introduced in 1957. The basic design of the prior DB cars was retained, as it had proven to be very popular and versatile. The most noticeable change was to the front which received a revised frontal region. The big changes occurred elsewhere, with the vehicle's mechanical components, including the standard 162 horsepower engine and front disc brakes. Both of these changes greatly improved the vehicle's performance and handling capabilities.

The 1959 Aston Martin DB2/4 Mark III Fastback Coupe finished in blue paint with brown leather was offered for sale at the 2006 RM Auction in Monterey where it was estimated to sell between $70,000-$90,000. It is powered by an 2922cc DOHC six-cylinde....[continue reading]

Only a few of the hand-built Aston martin DB Mark III made their way to the United States during their brief production run in the late 1950s. This vehicle was in the care of the same owner for fifty-one years. The Saloon wears coachwork by Tickford ....[continue reading]

This Aston Martin is the link between the 1950s DB2 cars designed by Claude Hill and the more modern Touring designed Aston Martin DB4 that became such an icon of the 1960s. Aston martin built 551 Aston Martin MK IIIs of which 84 were dropheads. This....[continue reading]