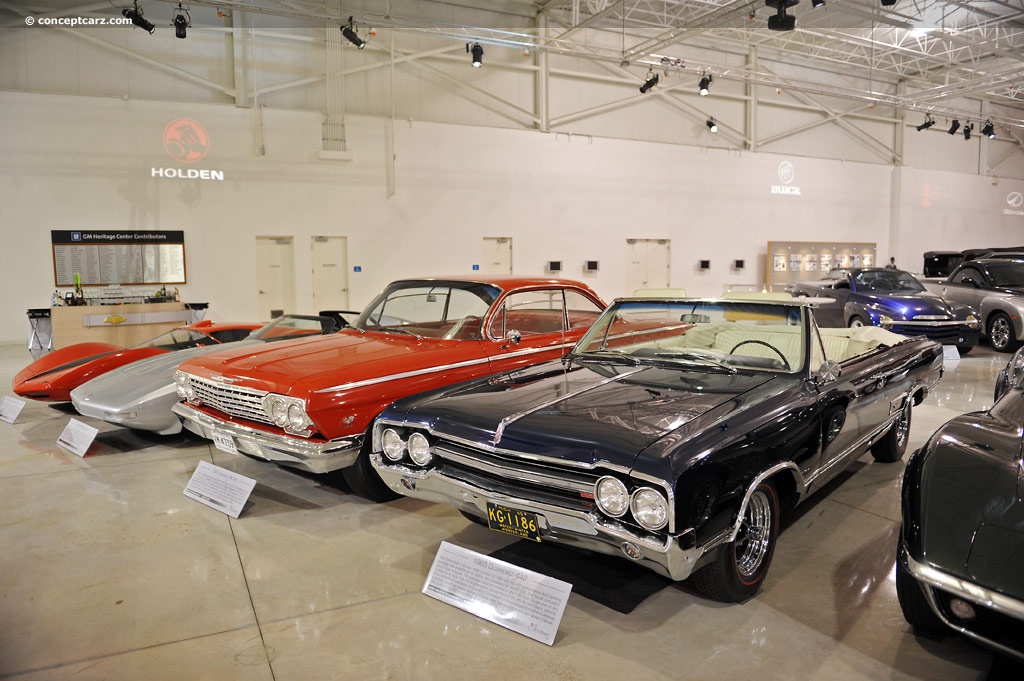 For 1965, the Oldsmobile F-85 was given a few updates to its styling. The big news came mid-season, with the introduction of the 4-4-2 package (which represented 4-speed, 4 barrel carburetor and dual exhausts). The 442 engine was a special Rocket V8 with its own block, pistons, exhaust manifolds, and heavy-duty cooling. The package also included a heavy-duty suspension, wider tires and wheels, heavy-duty engine mounts, heavy-duty steering gear, heavy-duty frame, and a special rear axle and driveshaft. The F-85 came equipped with either V-6 or V-8 engines and had several body styles to select from, including a 2-door club coupe, station wagon, and sedan. The F-85 was available as Standard, Deluxe, and Cutlass. The Cutlass models were available as a Sports Coupe, Holiday Hardtop, or Convertible.

The F-85 came equipped with a heater/defroster, self-adjusting brakes, dual sun visors, oil filter, electric windshield wipers, seat belts in the front, and an aluminized muffler. The Deluxe and Cutlass models were given a Deluxe steering wheel, padded dash, and carpeting.

The V-6, overhead valve engine displaced 225 cubic-inches and offered 155 horsepower. The standard V8, overhead valve engine was rated at 250 horsepower. Transmission choices ranged from either a Jetaway automatic, to a three-speed manual or a close-ratio, fully-synchronized, four-speed manual.
The Oldsmobile 4-4-2 was the company's counterpart to the Pontiac GTO in the evolving muscle car market. During these early years, it was not a separate model yet, but an option package on the Cutlass two-door models. The 4-4-2 (along with the items already mentioned) had an 11-inch clutch, a 70-amp battery, and special badges.
by Daniel Vaughan | Jun 2014

The name 442 first appeared in 1964 as an option on the F-85 and Cutlass. The 442 was technically the B09 Police Apprehender option which included the four-barrel carbureted 330 cubic-inch V8 with dual exhaust and 310 horsepower. The suspension, shocks, clutch, transmission, driveshaft, brakes, and wheels were also greatly improved. The name 4-4-2 evolved from the combination of options four-barrel....
Continue Reading >>

Following Pontiacs lead, Oldsmobile became the first company in the GM division to begin offering full-size muscle cars in its midsize Cutlass model. Designated the 4-4-2 package, it included the top engine available from Oldsmobile, along with a 330 cid V8 with the police package. The name represented the engines 4 barrel carb, 4 speed manual transmission, and dual exhausts. The Oldsmobile 442....
Continue Reading >>

The muscle car era was certainly an exciting time and its birth is credited to Pontiac's ad man Jim Wangers and division manager John DeLorean. At the time, GM policy forbade the use of engines larger than 330 cubic-inches in intermediate-size bodies....[continue reading]