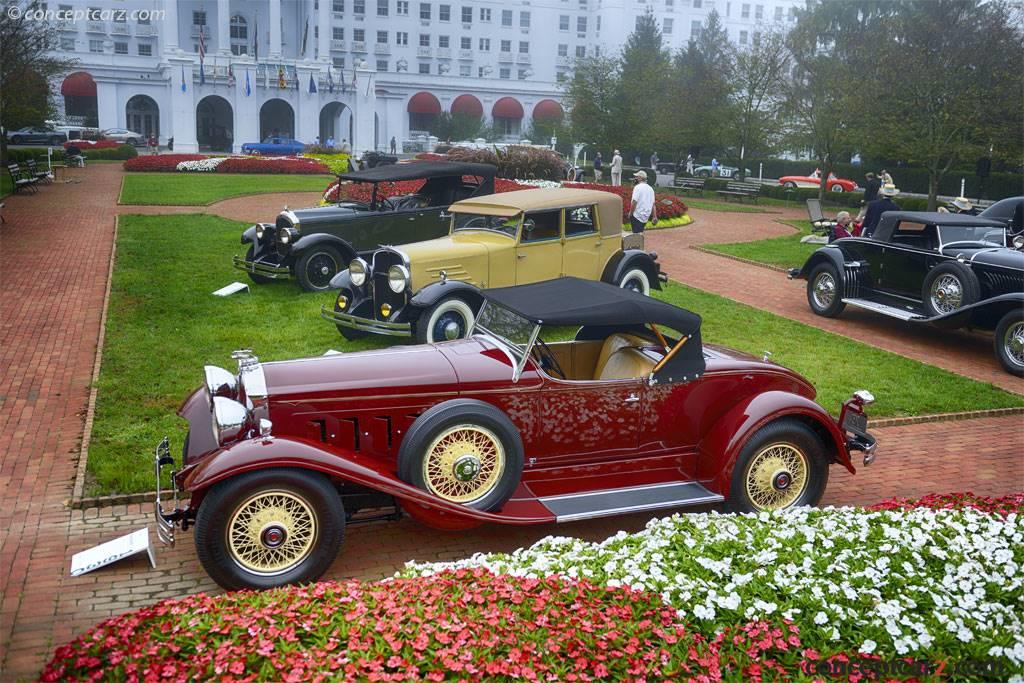 It is believed that just under 120 examples of the Packard 734 were constructed with as many as 26 surviving in modern times. The Packard 734 was constructed by the company to be a high-performance vehicle with stylish bodies, low weight, and high top speeds. Inside of these small vehicles (small for the day) was Packard's largest engine, a 384 cubic-inch super eight with Detroit Lubricator 2 barrel updraft carburetors. There was a vacuum-driven booster to keep fuel regulated to the engine while the vehicle was traveling at high speeds.

The bodies of these vehicles were much narrower than the other production Packards. This practice aided in the reduction of overall weight and helped the vehicle to achieve a 3.31:1 gear ratio. To help keep the vehicle in the driver's control, finned cast iron drum brakes were used. Standard Packards were un-finned.

The side-mounted spare tires were placed in front of the passenger compartment.

Famous coachbuilders were given the opportunity to create custom bodies to suit the client's specific needs and desires.
by Daniel Vaughan | Mar 2007
Vehicle Profiles

By 1930 the 734 Speedster Series was a full line of cars. The specially designed short, narrow, and lower bodies were built in Packard's own new custom body shop located right on the plant site on East Grand Boulevard. These specially built Speedst....[continue reading]

The Packard Speedster Eight 7-34 was one of the first cars produced using the muscle-car recipe, long before the term was born - a lightweight body mounted to the company's shortest chassis and fitted with a heavily modified version of its biggest en....[continue reading]

Packard unveiled the 734 Speedster in 1930 and was the brainchild of Col. Jesse Vincent, Packard's vice president of engineering. Essentially a factory hot rod, it was built atop a shortened and narrowed DeLuxe Eight chassis, and equipped with 19-oin....[continue reading]

For 1930, Packard introduced a line of high performance models that used its largest engine, complete with several unique performance modifications, coupled with a short chassis and lightweight coachwork. The result was a car offering lively perform....[continue reading]

The Packard 734 was available in five different body styles with total production reaching 113 examples for all body styles. This boattail runabout speedster was delivered new to a Mrs. Sealey from Portland, Oregon. It was acquired by William Harrah ....[continue reading]

Using what Packard had in current production by modifying the Packard standard Eight chassis and coupling it with a reworked Deluxe Eight engine, the Packard 734 Speedster was born. The custom built bodies were narrower and lower than typical, and wi....[continue reading]

As near to a sports car to ever bear the Packard name the 7th Series Speedster Runabout was set on a short 134-inch wheelbase and powered by a highly modified 385 cubic-inch straight eight engine allowing the Speedsters to exceed 100 mph. Distinctive....[continue reading]

The Packard 734 Series was the brainchild of Colonel Jesse Vincent, Packard's Vice President of Engineering. Introduced during the midst of an escalating horsepower race, the Packard 734 Speedster was the prototypical factory 'hot rod.' They were an ....[continue reading]

Packard introduced the 734 Speedster series in January of 1930, a full five months after the public introduction of Packard's Seventh Series models on August 20th of 1929. This series was the work of Colonel Jesse Vincent who had a special speedster ....[continue reading]

The Packard 7-34 Speedster Eight was one of the first cars produced using the muscle car recipe, long before the term was born: a lightweight body mounted to the company's shortest chassis and fitted with a modified version of its biggest engine. In ....[continue reading]

This 1930 Packard Speedster Boattail Runabout was once part of the famous Harrah Collection and is one of a very few of this body style known to exist. It is believed that this model was produced in response to the Cadillac Sixteens.....[continue reading]

The Packard 734 Speedster was one of the first cars built in series by using the muscle car recipe, long before the term was born: a lightweight body mounted to the company's shortest chassis and fitted with a modified version of its biggest engine. ....[continue reading]

The 1930 Packard Speedster Eight model, powered by Packard's traditional straight-eight engine, was offered in several magnificent body styles. Its Speedster name wasn't linked to its body style, but rather the high-performance nature of its chassis ....[continue reading]

The Packard 734 Speedster was the brainchild of Col. Jesse Vincent, Packard's vice president of engineering. In similar fashion to Hot Rods that would follow, the 734 rested on a shortened and narrowed chassis and was equipped with 19-inch wheels, a ....[continue reading]

Packard was produced from 1899 to 1958. It was known for superb engineering and craftsmanship. Between 1924 and 1930, Packard was also the top-selling luxury brand in the world.....[continue reading]

One of rarest production Packards ever produced. There were a total of 19 produced and only 2 exist today. The other Speedster Sedan is in the Gilmore Car Museum. In 1930 if you wanted to buy a Speedster you had to purchase it from the factory as the....[continue reading]