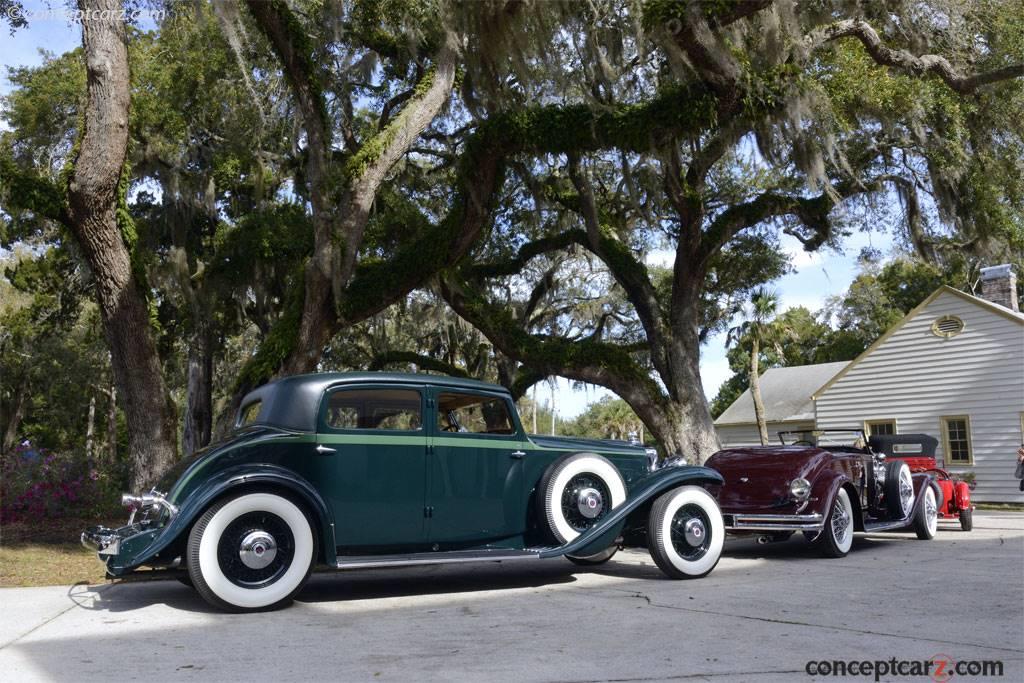 Harry Clayton Stutz built his first car in five weeks. It finished 11th at the 1911 Indianapolis 500, despite numerous stops for fresh tires, to prompt its creator to set up the Ideal Motor Car Company to manufacture the 'Car That Made Good In A Day'. A year later, in 1912, Stutz built its most famous product, the Bearcat Speedster. It was a minimalistic vehicle that was devoid of non-essentials making it one of the first true sports car. In 1912 Stutz won 25 out of 30 competitions entered thanks to the Bearcat. The Bearcat was part of the Stutz lineup until the end of the 1924 season when the installation of Frederick E Moskovics as company president marked a change of emphasis, now focusing on the luxury market.

In 1926, Stutz introduced its first eight-cylinder chassis called the Vertical Eight. It had an under-slung worm final drive which allowed coachbuilders to craft elegant low-slung bodies. In 1927 at Indianapolis, a Stutz sedan set a new world speed record, averaging 68.44mph for 24 hours. A year later, an example owned by French pilot and inventor named Charles Weyman and driven by Bloch/Brisson, finished 2nd at Le Mans behind the Rubin/Barnato Bentley despite losing top gear 90 minutes from the finish.

The original Stutz Vertical Eight which had debuted in 1926 was used for the development of Stutz's DV-32. The Great Depression had crippled many manufacturers, and for Stutz, they lacked the necessary funds to design a completely new engine. Instead, they continuously fine-tuned and upgraded the powerplant they had. The DV-32 began as a 322 cubic-inch former BB engine that Charles 'Pop' Greuter, the dean of the Stutz engineering department, had redesigned to include dual overhead camshafts and angled valves above the hemispherical combustion chambers. This arrangement led to the 'Dual-Valve 32' name, for its four valves per cylinder, totaling 32. The upgraded engine offered 156 horsepower, which was about the same horsepower per-cubic-inch ratio of the Duesenberg Model J. The engine was mated to a Warner three-speed transmission and sent power to the rear axle. Around 200 examples of the DV-32 were delivered and depending on the coachwork, had a top speed of around 90 mph.

Stutz offered the DV-32 with a variety of factory-built and semi-custom bodies. Indianapolis's Weymann American Body Company produced the 'Chateau line' using the French Weymann body-construction method under license. In similar fashion to other automobile bodies of the era, Charles Weymann's used a hardwood inner structure but clothed it in layers of cotton batting and fabric, with an outer layer of colored Zapron synthetic leather rather than metal. This made the bodies flexible, lightweight, and devoid of squeaks. The Zapron-paneled bodies required constant maintenance and repairs, resulting in the later use of more resilient aluminum.

Among the bodies offered on the Chateau Line was the five-passenger sport sedan called the Monte Carlo, which featured an unusually low roofline and windows and a fully integrated luggage compartment within a curving tail. This body style was available on the DV-32 chassis from 1931 through 1933.

In 1876, Harry C. Stutz was born. He grew up on the family farm where he often helped repair their farm equipment. This led to a fascination with engines and in 1897 he built his first car soon after he began designing and creating engines. The Stutz Company, based in Indianapolis, Indiana, introduced its first production vehicle in 1911. The vehicle, after only five months of design and build, was....
Continue Reading >>

1933 was the 'swan song' for mighty Stutz. As so often seems to be the case, their best work came at the end. Stutz was a company with a strong engineering background - beginning with a spectacular initial success at Indianapolis in 1911 that earned ....[continue reading]

During the early era of automobile production, there were a number of founders of automobile companies who were later forced out of the company that bore their name. To make matters worse, they were unable to use their name. ....[continue reading]

This 1933 Stutz DV-32 Dual Cowl Phaeton wears coachwork by LeBaron. It was given a concours-quality restoration with all cosmetic and mechanical issues address. It was refinished in its original color scheme. Upon completion, the car was displayed at....[continue reading]

This LeBaron Dual Cowl Phaeton was part of the collection of Bill Harrah who had over 1,500 vehicles. It was later found its way into the shop of Tom Sparks who restored it to its present condition.....[continue reading]

Waterhouse was famous for its Convertible Victoria bodies, and this 1933 example represents one of the last bodies built by Waterhouse as the economy of the 1930s took its toll on custom coachbuilders. Stutz production had also dwindled to around 100....[continue reading]

The eight-cylinder engine introduced by Stutz in 1927 was advanced and the vehicle's design was well styled and had excellent performance. By 1931 their sales had basically dried up and they began work on a new engine. Lacking the necessary resources....[continue reading]

The Monte Carlo was the largest and most expensive Stutz model for 1933 and features a custom aluminum body by the coachbuilder, Weymann American Body Company of Indianapolis, IN. Weymann was best known for their light-weight fabric covered bodies.....[continue reading]

Stutz was known as 'the car that made good in a day' referring to its success at the 1911 Indianapolis 500. By 1933, not to mention the second-place showing at the 1929 Le Mans, Stutz showed it was not only capable of producing fine sporting cars, bu....[continue reading]

The Indianapolis, Indiana, firm of Stutz responded to competitors who were building V-12 and V1-6 engines the only way they could afford - with the eight-cylinder DV-32. Stutz lacked the financial resources of its competitors, instead serving up a te....[continue reading]