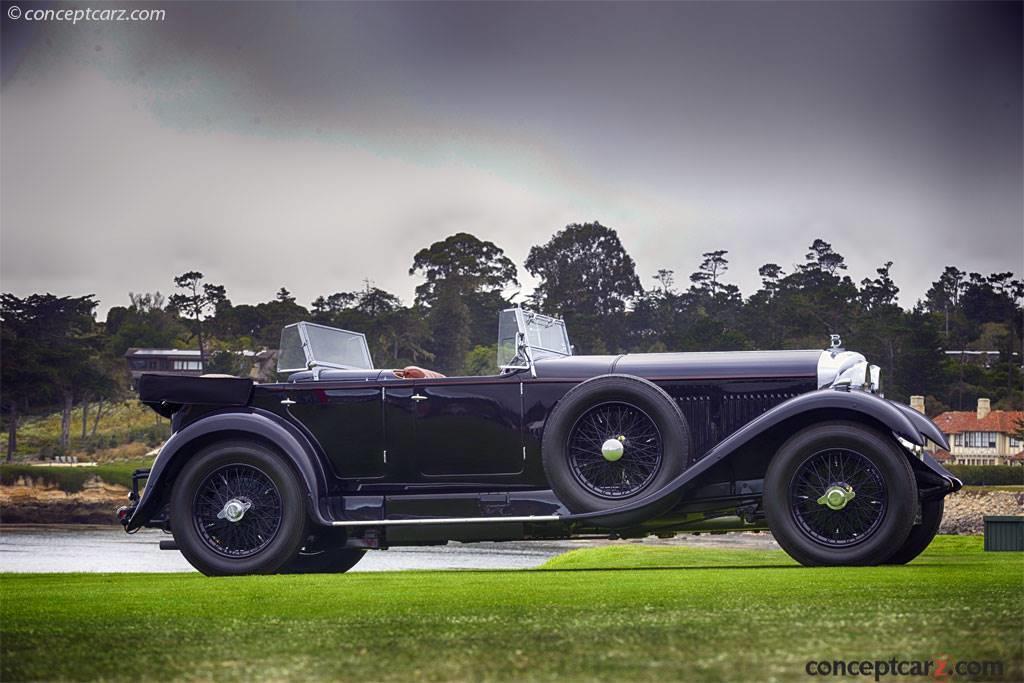 The 8 Litre was the largest and most luxurious Bentley luxury car made prior to the purchase of the marque by Rolls-Royce. It used a massive 8-litre (7983 cc/ 487 cubic-inch) straight-6 engine and rode on a long 144 inch (3658 mm) or longer 156-inch (3962 mm) wheelbase, making it the largest car produced in the United Kingdom up to that time.

The car was conceived similarly to the Bugatti Royale - as a halo car to vault the maker into position as the supreme manufacturer of luxury cars in the world. However, like the Bugatti, the 8 Litre Bentley failed to sell in sufficient numbers to make a profit.

Just as the Great Depression was starting to affect Europe, Bentley unveiled the 8-Litre, its finest and most expensive model, at the 1930 London Auto Show. Set on either a 12- or 13-foot wheelbase, the 8 Litre was practically a yacht. It had a massive frame supported by tubular cross-members, and it weighed two tons. The six-cylinder engine displaced eight liters. The 8-Litre was as advanced as any existing Rolls-Royce, and was faster than any Rolls-Royce built before World War II. Many of the 100 produced still survive, although usually in modified form. Poor sales helped put the company into receivership in 1931, and some say that Rolls-Royce bought Bentley just to eliminate the competition from the 8-Litre. Rolls-Royce did, in fact, dispose of all 8-Litre spare parts after taking over the company.

The six-cylinder engine used a one-piece iron block and cylinder head with an electron crankcase. Four valves per cylinder were specified, as was twin-spark ignition - both were state of the art at the time. Bore was 110 mm (4.3 inches) and stroke was 140 mm (5.5-inches). A four-speed manual transmission with a single-plate dry clutch sent power to the rear wheels. Springs were used all around, and 4-wheel servo-assisted brakes were also fitted.
by Daniel Vaughan | Sep 2019

The 8-Liter Bentley was introduced at the 1930 London Motor Show. It featured an 8-liter engine which was a development of Bentleys race-winning 6.5-liter unit. The main purpose of this model was to add competition in the luxury car segment and challenge the Rolls-Royce Phantom. The power-plant was an engineering marvel, fitted with an Elektron crankcase and sump. The engine was a single iron....
Continue Reading >>

This 1931 Bentley 8-Liter Sportsman Coupe has coachwork by J. Gurney-Nutting. It has won the 1932 RAC Best Coachwork Award, and the 1999 Best in Show of the Louis Vuitton Classic at the Hurlingham Club. In addition, it has won a number of BDC Awards ....[continue reading]

The 8 Litre Bentley was the largest and most luxurious Bentley made. It was conceived as somewhat similar to the Bugatti Royale and was to catapult Bentley into a position of a supreme manufacturer of luxury automobiles.....[continue reading]

Only one hundred 8-Liter Bentleys were ever produced. The launch of the 8 Litre coincided with the economic crash of the Great Depression. Consequently, few could afford Bentley's powerful new model. It was created as a halo car for Bentley to vault ....[continue reading]

There were only 100 examples of the 8-Liter Bentley's constructed. A mere seventy-eight have survived the challenges of time and are still in existence. 16 are open bodywork, six are drophead coupes and ten are open tourers. There are only twelve ....[continue reading]

The Bentley 8-Liter was the largest British motor car produced at that time. it was substantially more expensive than the competing Rolls-Royce Phantom II. Unbeatable in regards to smoothness and silence, the engine was capable of pushing the car t....[continue reading]

As its car building progressed, Bentley would go on to produce models of 4.5 liters and 6.5-liters and finally, between 1930 and 1931, the mighty 8-Litre. The 8-Litre was basically an enlarged version of the Speed Six. It had a new lower chassis fr....[continue reading]

The 8 Liter Bentley was the largest, most powerful and last model built by the original Bentley Motors, Ltd. The earlier models, the 3, 4-1/2, and Speed Six built Bentley's reputation primarily on their racing prowess. The 8 Liter was a departure in ....[continue reading]

The first owner of this Bentley was Mr. A.V. Bustard of Antrim, North Ireland, who took possession on April 1st of 1931. The car was powered by engine number YR 5086 and fitted with an F-Type gearbox, number 8083. The chassis left the Cricklewood wor....[continue reading]

This example was purchased in 2004 from Mr. David Roberts, who had owned it in England since 1953. There were two owners prior to Mr. Roberts. The car had undergone a complete restoration, which lasted from July of 2004 through February of 2007.....[continue reading]

The 8-Litre Bentley was very tall and was over 20 feet long, with an engine compartment similar to that of a locomotive. They were ideally proportioned for elegant custom coachwork and were capable of reaching and exceeding speeds of 100 mph. The 8-L....[continue reading]

This Bentley 8-Litre is the 13th of just 100 examples built. It was delivered as a company demonstrator to Société Européene Bentley Automobiles SA, near Paris, France, on March 1931. Bentley Motors commissioned the car's four-door sports saloon coac....[continue reading]

100 examples of the 8-Liter Bentley were produced before bankruptcy overtook the original Bentley Company. Introduced at the 1930 London Motor Show, the 8-Liter was the largest engined car made in the United Kingdom at the time. It was capable of fas....[continue reading]

This Bentley 8-Liter was originally bodied by H.J. Mulliner as a Weymann fabric-paneled saloon. It was shown at the 1930 Olympia Motor Show prior to coming into the care of its original owner, Sir William Crawford. The car was later built to its pres....[continue reading]

The Bentley 8 Litre was basically an enlarged version of the Speed Six with a new and lower chassis. Designed to go head-to-head with the new Rolls-Royce Phantom II, the first 8 Litres appeared at the Olympia Motor Show in October 1930 and created a ....[continue reading]

This 8 Litre Bentley was commissioned by Woolf Barnato, the chairman of Bentley Motors and triple Le Mans-winning 'Bentley Boy.' The 2-door Sports Tourer body was built on the shorter 12-foot chassis and all plated items were made of copper at the sp....[continue reading]

Total 1931 Bentley 8-Liter production: 0
© 1998-2020. All rights reserved. The material may not be published, broadcast, rewritten, or redistributed.