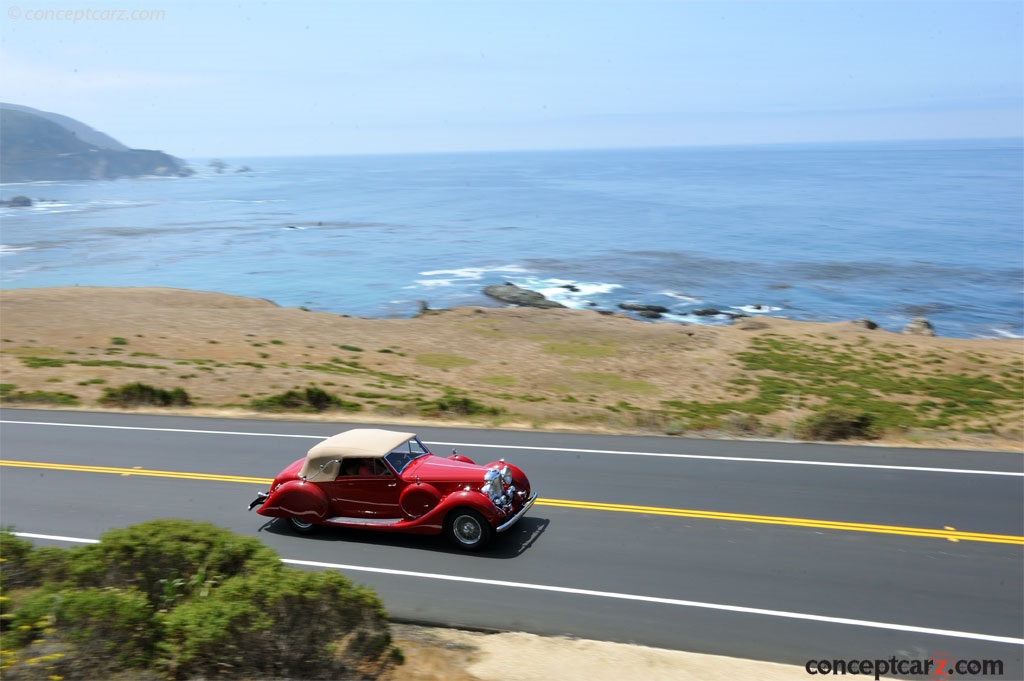 Lagonda was founded in England in 1899 by American Wilbur Gunn. Lagonda is the Shawnee Indian name for Buck Creek in Gunn's native Springfield, Ohio. Automobile production began in the early 1900s, focusing on the luxury automotive segment, with continual development, improvement, and size throughout the years. The engines became more refined, culminating with the 4.5-liter, 6-cylinder Lagonda Rapide that was shown at the London Motor Show in 1934.

In 1935, lawyer Alan P. Good successfully outbid Rolls-Royce for control of Lagonda. Additionally, he was able to recruit W.O. Bentley as chief engineer followed by many of his former engineering staff from Rolls-Royce, the firm that had previously gained control over Bentley Motors Ltd in 1931. W.O. had been kept on as customer relations and testing advisor.

At Lagonda, W.O. and his newly formed team were tasked with improving the existing six-cylinder M45 chassis while simultaneously designing a new model. He improved the ignition and manifold on the M45 model and a new L45 model introduced in 1934. In October of 1936, the new LG6 was announced, featuring a torsion bar independent front suspension, a hypoid rear axle, and hydraulic brakes. The new V-12 model was also announced at the Olympia Motor Show, and the car's chassis were similar, with factory bodies offered on either chassis. Production did not begin until October 1937 and would continue until the outbreak of war in 1940. Customers favored the larger 12-cylinder engine over the six, with 189 examples of the twelve sold and just 85 of the six.

The Lagonda V-12s of 1937 to 1940s ranked among the finest automobiles and rivaled the contemporary multi-cylinder products on the market. The heart of the new Lagonda was its V12 engine by W.O. and engineer Stuart Tresilian, whom Bentley had recruited from Rolls-Royce. It had a 60-degree veed angle, and modern overhead-valve cylinder heads with a single overhead camshaft per cylinder bank. It had a short and compact stroke unit, with cylinder blocks cast in unit with the crankcase and side-by-side connecting rods. It was strong and lightweight thanks to leading-edge metallurgy and materials, with every component rigorously tested for reliability. The standard setup included a pair of new-design SU downdraft carburetors, helping to produce 180 horsepower at 5,500 engine revolutions. The engine was fitted into a robust box-section frame that had cross members and cruciform bracing making it strong enough to carry the most luxurious coachwork. Braking was handled by modern hydraulic drum brakes and the suspension was comprised of an advanced independent torsion-bar front setup. Top speed, depending on coachwork, was in the neighborhood of 105 mph.

A sportier version of the V12 was called the Rapide. It rested upon a shorter 124-inch wheelbase and came with a four-carburetor engine offering upwards of 210 horsepower at 5,500 engine revolutions. Coachwork included a drophead-coupe penned by Lagonda designer Frank Feeley and built in-house. Just 17 examples of the V-12 Rapide were built, including two 1939 Le Mans racing cars and three or four with external coachwork.

Wilbur Gunn constructed his first self-propelled vehicle in 1899 it was a motorized bicycle with an engine of his own design that powered the front wheel. Soon, his backyard greenhouse had been converted into a factory used for constructing belt-driven motorcycles. Gunn, an American opera singer living in England, had selected the name Lagonda from an Ohio creek. The creek had been named after....
Continue Reading >>

One of the great British marques, Lagonda was founded by American Wilbur Gunn who initially built motorcycles, then three-wheelers, and graduated to four-wheeled machines in 1910. During the 1920s and 1930s Lagonda made a name for itself at Le Mans a....[continue reading]

Founded in England in 1899 by American Wilbur Gunn, Lagonda is the Shawnee Indian name for Buck Creek in Gunn's native Springfield, Ohio. Between 1905 and 1935 Lagonda built increasingly larger and more refined motors, culminating with the 4.5-liter,....[continue reading]

This model was designed and developed by W.O. Bentley after he left Rolls-Royce in 1935. It was introduced at the 1936 Olympia International Automobile Exhibition in London and went into production in 1937. With a shortened LG6 chassis and a 4480cc....[continue reading]

This 1939 Lagonda V12 Drophead Coupe was offered for sale at the 2007 RM Auctions held in Amelia Island, Florida. It is powered by a 4480cc overhead valve V12 engine capable of producing 180 horsepower. There is a four-speed manual gearbox and Lock....[continue reading]

Alan P. Good, the new owner of Lagonda in 1935, recruited W.O. Bentley as his chief engineer to work on a range of engines and chassis. W.O. and his team designed an entirely new model, the Lagonda V12, which was built between 1937 and 1940. It is co....[continue reading]

W.O. Bentley arrived at British automaker Lagonda in 1933 and began work on achieving the full potential of the firm's existing 4.5-liter, six-cylinder Meadows-engined cars. In 1935, he achieved an unprecedented 1st, 2nd and 3rd clean sweep at Le Man....[continue reading]

The Lagonda marque was founded in 1906 by Wilbur Gunn, a Scottish-American and former opera singer. He became a British national in 1891 and worked as a speed boat and motorcycle engineer in England. He named the car after the Shawnee settlement in m....[continue reading]

This Lagonda V12 Rapide was delivered to James Young in South London to have a special drophead coupe body fitted in October 1939. This chassis is one of just two Lagonda Rapides that does not carry the standard Frank Feeley-designed drophead coachwo....[continue reading]

W.O. Bentley began work with British automaker Lagonda in the late 1930s. He created a V-12 engine that was composed of Duralumin, steel, aluminum, and phosphor-bronze. The engine was installed a chassis that had independent front suspension and four....[continue reading]

Wilbur Gunn constructed his first self-propelled vehicle in 1899; it was a motorized bicycle with an engine of his own design that powered the front wheel. Soon, his backyard greenhouse had been converted into a factory used for constructing belt-dr....[continue reading]