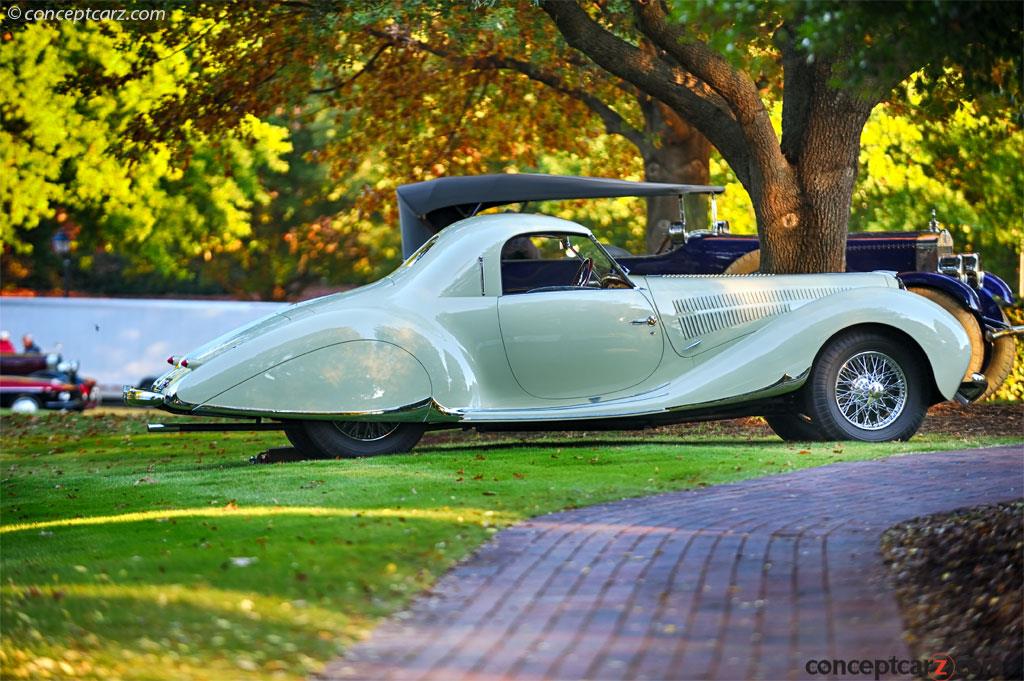 Throughout most of Delahaye's early years, they produced solid cars for the middle class with its bread-and-butter being commercial vehicles and heavy trucks. Emile Delahaye founded the company in 1832 and initially setup in Tours, in Indre-et-Loire, and then moved to 10 rue du Banquier in Paris in 1898 when the business was bought by Georges Morane and Léon Desmarais. Their top of the range car production was often unstable but supported by the constant and regular production of its heavy trucks. The economic crisis of the 1930s hit the French car production very hard and Delahaye lacked sufficient financial means to shield it from these effects. In a radical move, the brand decided to focus on building more prestigious models rather than its prior range. They decided to reduce production and increase quality, durability, reliability, and luxury. Delahaye's reputation quickly transformed from builders of dependable, pedestrian, and mundane vehicles to luxury sports car manufacturers. Handing off production to renowned bodywork specialists and basking in the glow of numerous competition wins elevated the company to a new tier in the industry.

Delahaye's Type 135 was introduced in 1935, powered by an engine initially designed for car use, although it had first appeared in a Delahaye commercial vehicle. The counter-balanced six-cylinder engine, formerly used in the earlier Type 138, had two-cylinder valves, and a four-bearing crankshaft. In twin carburetor form it produced 95 horsepower; with three downdraught Solex carburetors, it delivered 110 horsepower. The engine installed in an equally classic chassis designed by engineer Jean-Francois comprised of two main side frames according to the Bloctube principle borrowed from Peugeot. The welded box-section side members and pressed cross members were welded to a ribbed floor. The 114-inch wheelbase platform used an independent front suspension with transverse leaf springs and a live rear axle with quarter-elliptic springs. The stance was relatively low, thanks to the nearly underslung chassis, arched rear frame members, and the front independent setup improving the cars handling and performance. Four-wheel assisted mechanically-actuated fourteen-inch Bendix drum brakes provided the stopping power. The engine was backed by a four-speed gearbox or Cotal electro-magnetic pre-selector gearbox, the latter proving to be the better option as the four-speed lacked synchromesh on first and second.

The Delahaye Type 135 was also known as the 'Coupe des Alpes' after its success in the Alpine Rally. The driving characteristics of the T135 were delightful and spirited, thanks to its agile and lively chassis, light steering, smooth Cotal electromagnetic gearbox, and independent front suspension.

In racing guise, the 135 series was a formidable competitor, and by the close of 1935, Delahaye had won eighteen minor French sport car races, placed fifth at LeMans, and performed well in a number of hill-climbs. They took the first six places at the 1936 Marseilles race, placed second and third in the 1936 Mille Miglia, a second at Le Mans in 1937, and first, second and fourth place at Le Mans in 1938. Accolades at the 1936 Le Mans race were nearly guaranteed had the race not been canceled. They set the all-time record at the Ulster Tourist Trophy and René Le Bègue and Julio Quinlin won the 1937 Monte Carlo Rally driving a Delahaye. Prince Bira won the 1938 Donington 12-Hour Sports Car Race in Prince Chula's example and went on to take victory in Brooklands' 'fastest road car in England' race.

The Delahaye Type 135M was introduced in 1936, powered by a larger 3,557cc displacement engine, now offering 90 horsepower with a single carburetor, 105 hp with two, and 115 horsepower with a triple carburetor setup. At the Paris Salon in 1938, Delahaye introduced a new, top-of-the-line model of the Type 135 called the MS (Modifiee Speciale). The existing 3.5-liter six-cylinder engine was thoroughly updated with a larger cylinder head, bigger valves, and improved breathing, horsepower increased to 130 hp. Depending on the gearing and coachwork, it was now capable of 110 mph top speed. With triple carburetion, horsepower rose again to 160 bhp.

The Delahaye 135 was successful in the salesroom and the racing track with its longevity continuing into the post-war era. Among the legendary coachbuilders who created bodies for the Type 135 include Figoni et Falaschi, Henri Chapron, Marcel Pourtout, Gramond, Langenthal, Franay, Guilloré, Graber, deVillars, Antem, Letourner et Marchand, and J. Saoutchik.
by Daniel Vaughan | Nov 2020

Delahayes have always been remarkable automobiles. They are interesting, quick, responsive, and very often astonishing to look at. Emile Delahaye began building rear-engined, belt-driven cars in 1894. Introduced at the 1935 Paris Salon, the Type 135 ....[continue reading]

This handsome cabriolet was bodied by the French firm, Figoni & Falaschi. Built on a long chassis, this car was delivered with leather furnishings by Hermes of Paris. It is the only time that noted firm has ever outfitted an automobile. The car wa....[continue reading]

The placement of custom bodies on the chassis of great automobiles otherwise known as coach building reached its zenith in the 1930s. The French Delahaye was renowned for its drivability and road holding abilities. Add its high performance inline six....[continue reading]

This body style was known as the 'Paris Salon Cabriolet' because it debuted at the famous venue in 1936. Mr. Jourde, a noted French businessman, explorer and friend of Joseph Figoni, ordered the car. Prior to World War II, it was shipped to Mr. Jourd....[continue reading]

This Delage D8-120 was completed by Chapron for the 1936 Paris Salon de l'Automobile; it was the first Cabriolet Grand Sport he built on Delage's new chassis. After the Salon it was delivered through Garage Poirier-Augerau in Versailles to the Parisi....[continue reading]

In the 1880s or the 1890s, after having acquired M. Brethon's machine shop in Tours in 1845, Emile Delahaye began experimenting with gasoline engines. His first automobile was built in 1895, and the following year he drove one of his creations to six....[continue reading]

This Grand Sport Roadster is one of the most striking and perfectly proportioned Figoni & Falaschi designs ever built on a Delahaye 135 MS chassis. This car was commissioned in 1939 by a Monsieur Jeantet in Paris. The car was delivered to Mr. Jeantet....[continue reading]

This vehicle is a Delahaye 135 MS Coupe des Alpes with three-position convertible top by Chapron. It has upgraded Figoni bumpers and was finished in navy/light blue with navy blue leather interior. It is currently finished in two-tone livery with a s....[continue reading]

The origins of Delahaye lie in a company set up as long ago as 1845 to produce brick-making machinery. Emile Delahaye was a railroad engineer who designed rolling stock for the French and Belgian railroads and built his first car in 1895. Delahaye to....[continue reading]

This unusual Delahaye 135 M is one of only two such Delahayes with Roadster bodies built by the Carlton Carriage Company of London. Carlton was well known for its open bodywork on many different European chassis throughout the 1920s and 1930s. This c....[continue reading]