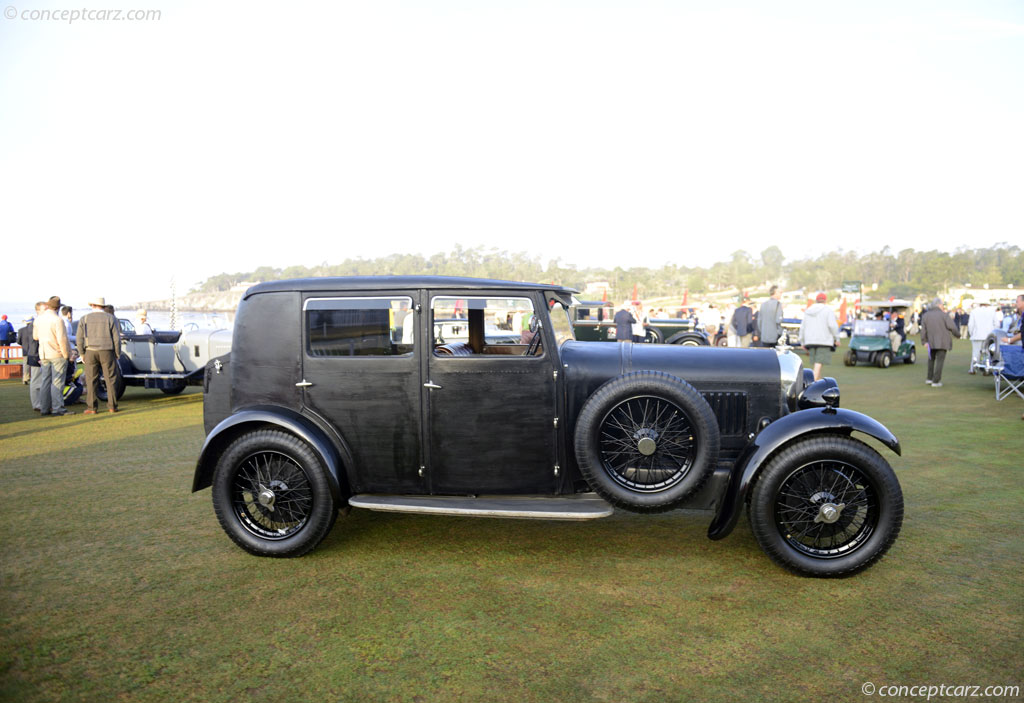 The Bentley 4 1/2 liter came into existence to fill a void left by the 3-liter and the 6.5-liter variants. The 3-liter suffered from underperformance while the 6.5-liter was unsafe for the roads. The 6.5-liter was powerful, and with poor road-conditions often caused tires to fail quickly. The solution was the Bentley 4.5-liter; a vehicle that had enough power to carry the vehicle down the road at a good pace. The chassis consists of channel-steel, front and rear suspension by semi-elliptic leaf springs, and 4-wheel drum brakes.
Production amounted to a total of 733 cars of all body styles. Fifty-four cars were equipped with the famous supercharged engine, 'Blower Bentleys,' built by the race driver Sir Henry 'Tim' Birkin as a private venture - against W.O. Bentley's wishes.

The 4.5-Liter Supercharged Bentley, better known as the 'Blower' Bentleys, is a sporting automotive icon that earned its place in history as an engineering marvel and powerhouse. Only 50 examples, plus an additional five racing prototypes, were created. In the modern era, they are among the top rank in collector cars throughout the world.

Engineer and founder W.O. Bentley was hesitant to adapt a supercharger to his 4.5-liter engines. Rather, the development was financed by a woman, the Honorable Dorthy Paget, who provided the funds necessary to complete the project. It was for Henry R.S. 'Tim' Birkin, one of the 'Bentley Boys' who campaigned the Bentleys at many venues and various competition events bringing recognition and victories to the Bentley marque. The list includes Brooklands with its closed oval course, and the other extreme, LeMans, with his challenging road course.

Birkin had intended to race the supercharged 4.5-liter Bentley at LeMans in 1929, but lubrication problems on the early cars halted those plans. Instead, Woolf Barnato (Bentley's chairman and fellow factory team racer), Birkin, and Glen Kidston drove the Bentley Speed Six Models in 1929 to victories at LeMans.

Birkin was able to convince Barnato to enter the 'blower' Bentley in the 1930 LeMans race. In order to do so, homologation requirements had to be satisfied. The rules stated a minimum of 50 examples had to be built. Bentley officially introduced their production versions of the cars at the 1929 Olympia Motor Show, with the fist cars on sale in April of 1930.

With homologation requirements satisfied, Bentley entered two blowers and three Speed Six models. Birkin's LeMans blower was co-drive by Jean Chassagne. The Blower Bentley showed great promise early in the race, and by the fourth lap had passed a highly-competitive supercharged Mercedes at 126 mph. In the process it shredded a tire and was forced to stop. At the time, they had been averaging 89.66 mph per lap, which was a new lap record for the course.

1930 was the last year the Bentley factory team would compete at LeMans, as the company had fallen on very difficult economical times. Dorothy Paget eventually withdrew her support for the Birkin blowers as the cost to compete continued to escalate. This brought an end to the short-lived saga of the Bentley blower era.
By Daniel Vaughan | Apr 2008

Shortly after introducing the 4 1/2 Liter, Bentley put it to use in competition. The Bentley Boys quickly earned LeMans and Grand Prix finishes and victories. It was proven in record runs and at various sporting events. Although the Speed Six was the....[continue reading]

The Gurney Nutting, Ltd. was established just after World War I, in 1919. The company was created by J. Gurney Nutting and initially located in Oval Road, Croydon. A fire destroyed the facilities in 1923 and resulted in the business relocating to E....[continue reading]

This is the only surviving Bentley Sport Saloon with coachwork by Maythorn & Sons, and it is one of only six 4.5 Litre Sports Saloons in the world. Sadly, most of these closed saloon bodies were discarded to make way for Vanden Plas-style LeMans repl....[continue reading]

A Centenary Celebration For Bentley At Goodwood